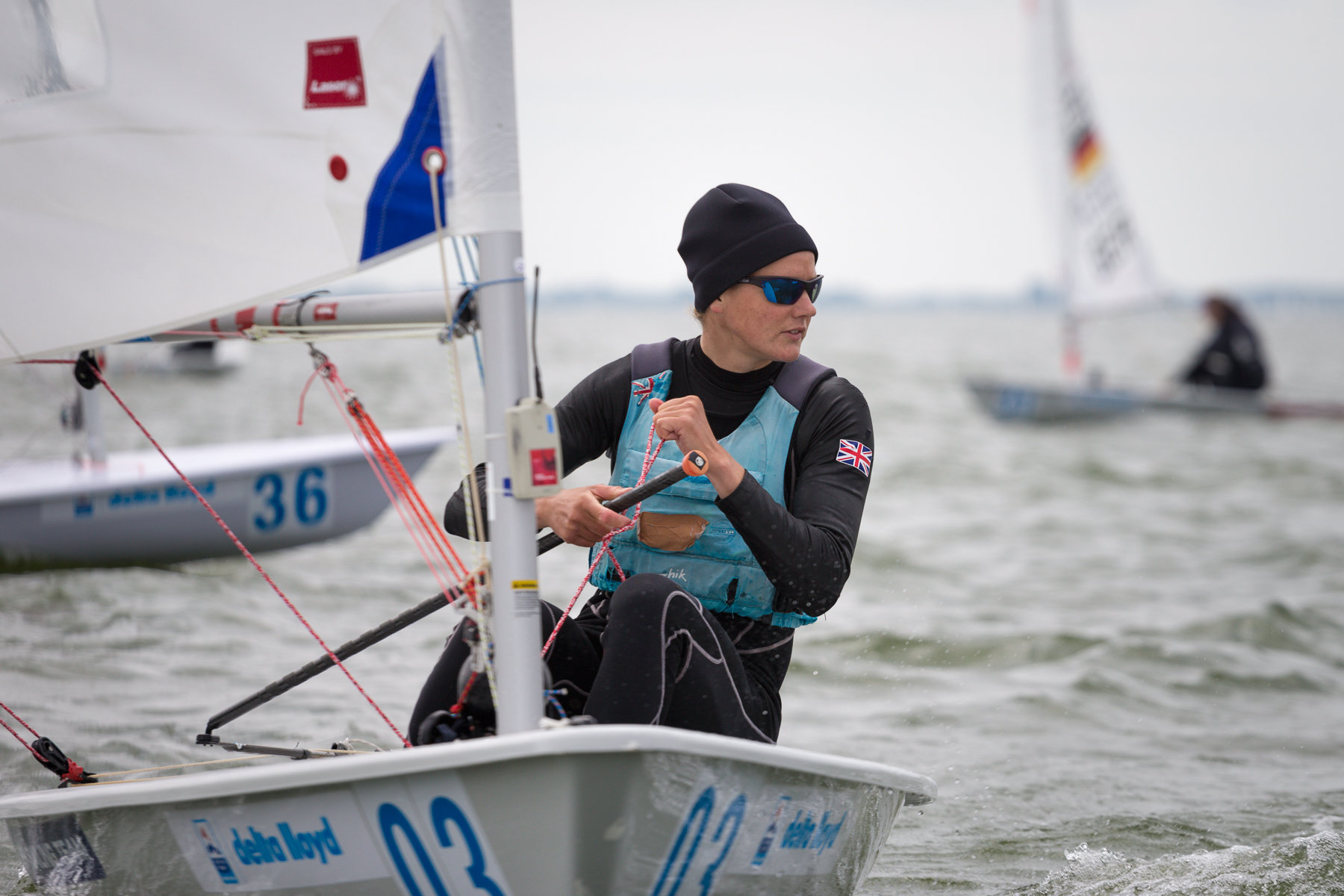 Wednesday, May 24th – There were tricky winds for the sailors and the race committee. The day started with a delay, and only once the Laser Radial had set off at noon, could the racing start. Due to the shifting winds, a lot of overall results have changed since the first day. The race committees had a long day on the water, however, they still managed to finish all planned races. Although there was a lot of waiting in the morning due to the shifting wind, the races still managed to go really well.

Lucky side in the Laser Radial

The Laser Radial started without any delay this morning. The Belgium, Emma Plasschaert, is leading the fleet: “It’s going well this week. In the first race I got lucky in the wind shift. One side of the fleet had a bad wind shift, fortunately I was on the good side. Therefore it wasn’t really a fair race, but that’s sailing. In the second race I had a bad start, but managed to get back into it.” Due to that wind shift in the first race, the top 3 is very different from yesterday. Marit Bouwmeester (The Netherlands) made the wrong choice in this race and has fallen to 12th place.

The Laser fleet had a good day after the delays in the morning. Australian, Matthew Wearn – currently in 2nd place, is aiming for the medal races.

“It’s going ok so far, yesterday I made a few mistakes. However, today I managed to get a 3 and 1, so I’m still in the top 3 and that’s good! As long as I keep sailing consistently this week, I’ll be happy with third and fourth places until the medal races.” Number one in the Laser fleet is Elliot Hansen from Great Britain.

In the mixed fleet, the women are leading. Afrodite Kyranakou said: “It was a difficult and tactical day because of the soft wind. But for us it’s also very interesting to see how we can get the boat moving again. We are leading now and if we can beat the Russian guys this week, we know we are doing well.” The Russians, Pavel Sozykin and Denis Gribanov, are very competitive in their class and two of the world's best. So after two days of racing and leading the fleet, the girls can conclude they are getting to their goal.

First time back in the boat since Rio, and happy to get out on the water again, is Dutchie Annette Duetz: “It’s really great to be back. I’m looking forward to starting a new Olympic campaign for Tokyo 2020, but I first have to finish my studies.” Duetz was in Rio with Annemiek Bekkering, however, this event we see her with Dewi Couvert. Bekkering is testing other crew to sail with. This week she is sailing with Jeske Kisters, following the split with Duetz after the Olympics. Bekkering explained: “I’m sailing with Jeske now, our goal is to be in the top 10 at the World Championship in Porto. The Dutch team is really big now and filled with a lot of men and women. It’s a great opportunity to try and sail with other crew members and to learn from one another. This week is also really great, today we had a couple of good starts.”

Unstable wind made it an exciting day for RS:X

The tricky wind, for the RS:X surfers, was a big factor. Kiran Badloe (The Netherlands) is the most consistent surfer so far this week, explaining: “I’ve only finished in 2nd place, until the last race today, when I got in at 11th. Anything could have happened today because of the unstable wind. If you choose the wrong side of the fleet, you’re out of the race.” The top of the RS:X fleet is coloured orange so far. Only in 3rd place do we see Frenchmen, Oël Pouliquen, in between the Dutch.

The 2.4mR started out late. It wasn’t until 16.30 hours that they could start racing. Megan Pascoe managed to keep the lead. Britain's, Carol Dugdale, made up her DNF from yesterday, and ends up in a 2nd place today.