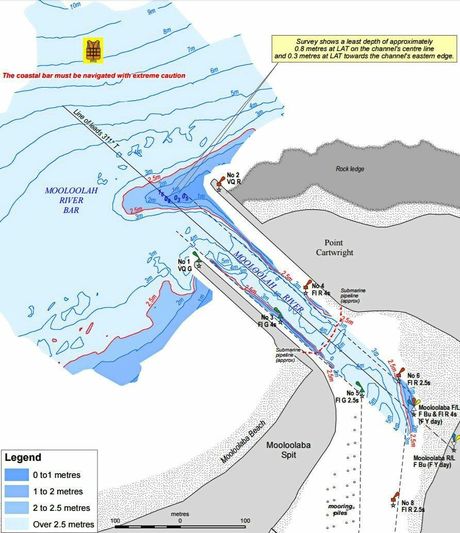 Maritime Safety Queensland has issued a warning to boaties entering and leaving Mooloolaba that there has been severe silting on the eastern (Port Cartwright) side of the river.

According to an article in the Sunshine Coast Daily, there is less than 0.3 metres of water at the eastern side of the breakwater at low tide. The article quotes Mooloolaba Coast Guard's Rod Ashlin saying his organisation had been asked to guide an 18m fishing trawler in from 20 nautical miles out to sea yesterday, the skipper of the trawler unwilling to take a gamble on the bar crossing.

Mr Ashlin told The Daily the silting had been occurring for some time, but once it had started, the shoal built quite quickly, as waves began breaking across it, compounding the problem.

He warned river users if they came in over the leads, they'd be going straight across the shallowest part, which Maritime Safety Queensland assessed to be as shallow as 0.3m on low tide, on the eastern side of the channel.

“It was breaking pretty badly (on the bottom half of the tide),” Mr Ashlin said of yesterday's conditions. “There was surfers and boardriders out there again, coming off in front of boats.”

Maritime Safety Queensland warned the centre of the channel was as shallow as 0.8m on low tide at present, and advised the deeper water was to the west.

“Masters of smaller recreational boats, personal watercraft, and passive craft like kayaks and canoes must remain mindful of the heightened risk to larger vessels navigating the river entrance and coastal bar,” the official State Government warning read. “Except for entering and departing the river, these smaller vessels and passive craft should keep well clear of the coastal bar and not use it for recreational purposes.”