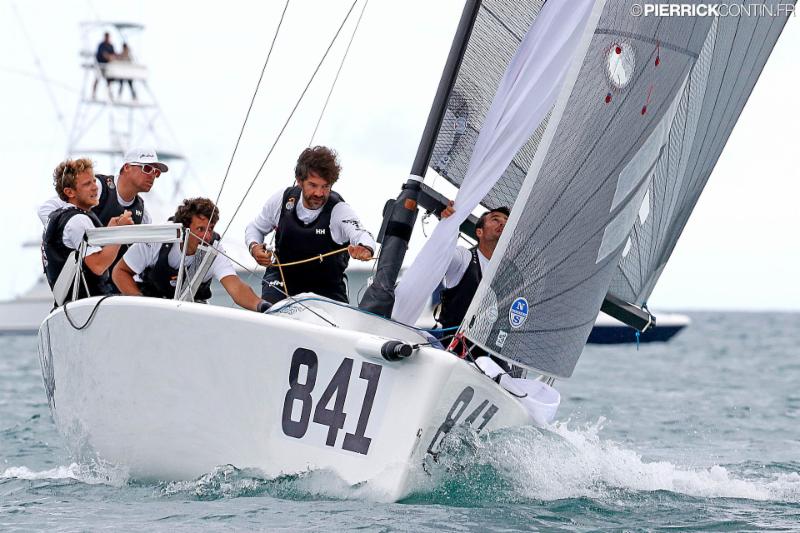 The trickier conditions of today, with a light breeze from 040° that filled in only in the afternoon, forced the Race Committee to raise AP flag until 2.50pm, moment when the fleet was eventually given the preparatory signal and allowed to sail the first and only race of the day.

Embarr IRL829, for the first time since the beginning of the Championship, got out of the top five and ended the race in fifteenth position: the result obtained today has been discarded as worst of the series and still left Embarr in first position in the overall ranking, with a margin of 30 points over the second, Maidollis 3 ITA822, tenth in the race of today. With just two races left to sail and a 15 as worst result to be discarded, the path towards success for the Irish entry by Conor Clarke seems, as far as today, the smoother ever; the Irish owner, though, doesn't want to celebrate too much in advance: “Everything can happen – he declared – there are still two races to sail and we will be in the water competing with the same concentration as if those of tomorrow were the first races of the series”.

The fight for the rest of the podium, moreover, is still completely open: Maidollis 3 by Gianluca Perego and Air Force 1/West Marine Rigging USA820 by Bora Gulari are in play for the second and third place: the Italian boat is currently second with 51 points, discarding a 13, while the American is now third with 52 points and discarding a 26. Fourth and fifth place are respectively occupied by Brian Porter's Full Throttle USA849 (2) and Bruce Ayres' Monsoon USA851 (9), both having a total of 65 points and discarding a 20.

Leader of the day was the European vice-champion Bombarda ITA841 (1) by Andrea Pozzi, that eventually scored the first bullet of the series “We found a good rhythm today and the crew is happy for how we brought on the whole race. The start was good and allowed us to reach the first upwind mark in first position, then we managed to maintain the speed also downwind, even if the fight with Full Throttle, Air Force 1/West Marine Rigging and Slingshot has been tough,” declared the tactician of Bombarda, Giulio Desiderato, then passing the word to the owner, Andrea Pozzi: “Today it has been like a dream for us: we obtained a good second place in the Europeans in Hyeres, but here we have some of the greatest sailors of the World so being able to put the bow in front of theirs is a great achievement for our crew,” – declared Pozzi when back on the dock, and he proceeded: “The venue is amazing and Miami's race course is always demanding, for the wind and the oceanic conditions. The team is very united and we are enjoying each moment of this Championship: regardless what the final result will be, our main aim for tomorrow is to have fun”.

In the Corinthian division the battle is, if possible, even harder than in the overall ranking: the leader is still Marco Zammarchi's Taki 4 ITA778 (2), 19 points and a 4 as discard. Second and third place belong respectively to Megan Ratliff's Decorum USA805 (3) and Tõnu Tõniste's Lenny EST790 (4): both crews currently have 24 points, the first discarding a 22, the second discarding a 6. The fourth of the ranking, Glenda and Kevin Nixon's Accru AUS812 (8) would have to recover a great gap of disadvantage, 24 points to be precise, in order to reach the leaders and try to strive for the podium.

There are all the prerequisites to have a great show tomorrow in the water, for the last day of the 2016 Melges 24 World Championship. Preparatory signal is intended at 10.30 am and two races should be sailed. The prize giving is scheduled for the afternoon, in the Plaza of Jungle Island.