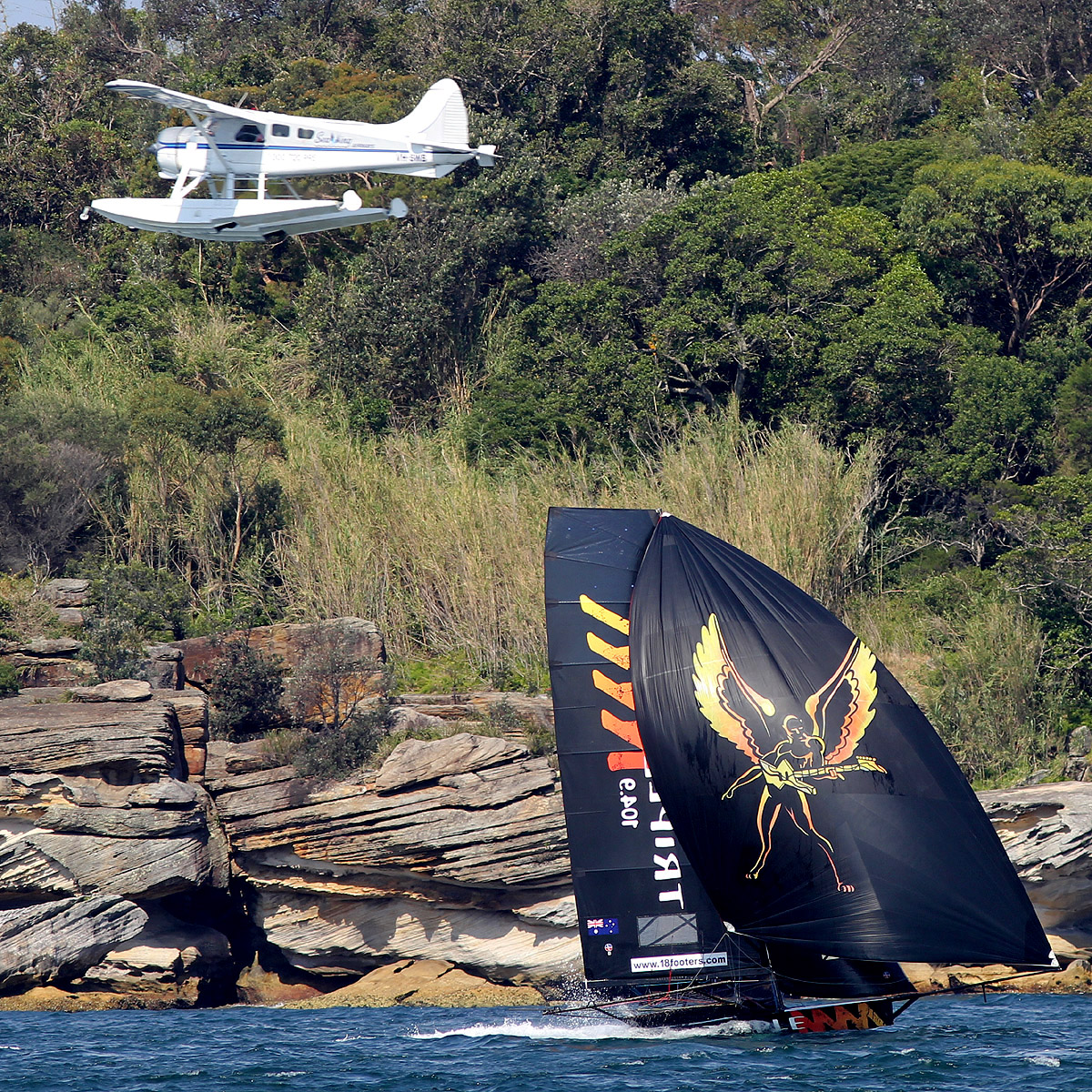 Local seaplane comes in for a closer look at the winner. Photo 18 Footers League.

James Ward, Phil Marshall and Harry West won their first 18ft Skiff race today on Sydney Harbour when they brought Triple M home a clear winner of the Australian 18 Footer League’s Yandoo Trophy. The young team had to withstand immense pressure from the fleet’s top crews before crossing the finish line with 40s. to spare.

The race was a return to the 3-buoys system, following the NSW Championship, and produced some close racing in the 12-knot NE-ENE breeze.

Appliancesonline won the start ahead of a closely bunched group of challengers. Once the race settled down, many of the leaders chose different courses as they each searched for the best breeze.

Appliancesonline.com.au, led for almost the entire windward leg with Triple M always looking in good shape to lead when the 3-buoys system came into play. Thurlow Fisher Lawyers, Asko Appliances, Smeg and Peroni (Nick Daly) were in the lead group while Lumix (Bryce Edwards) was also close enough to be a threat at the windward marks.

With the advantage of a red buoy rounding, Triple M grabbed the lead off Appliancesonline.com.au (white buoy) and led the fleet down the tight spinnaker run to the wing mark off the southern end of Shark Island.

Appliancesonline grabbed the lead from Triple M close to the mark, while Lumix, Smeg, Thurlow Fisher Lawyers and Peroni led the challenging group.

On the run between the islands the big Appliancesonline.com.au rig was superb as the team opened up a 40s break over Smeg and Triple M as the fleet set out on the following windward beat. Thurlow Fisher Lawyers was fourth, followed by Asko Appliances, Lumix, The Kitchen Maker (Stephen Quigley), Compassmarkets.com (Keagan York), Yandoo, De’Longhi (Simon Nearn), Line 7 (Jonathan Whitty) and Haier Appliances Pedro Vozone).

Appliancesonline continued to dominate the lead and edged further away from Smeg and Triple M on the long work back to the 3-buoys near the Beahel Buoy.

Once again, Triple M’s crew held on strongly against the top championship contending teams and regained the lead as spinnakers were set for the run down the harbour back to Clark Island.

Thurlow Fisher Lawyers (blue buoy) and Appliancesonline (white) were together as they chased the leader but the Triple M crew were still 30s ahead of Appliancesonline with one more lap of the course still to be sailed.

The Appliancesonline team threw everything at Triple M but couldn’t narrow the margin enough and trailed clearly as the fleet headed back downwind to the wing mark for the final time.

Despite a few anxious moments at the Shark Island mark, Triple M’s team held their composure and took the honour by a well-deserved 40s.

Next Sunday’s race is for the Syd. Barnett Jr. Memorial Trophy. The Australian 18 Footers League will have its usual Spectator Ferry available to follow all the action. The Spectator Ferry is also available throughout the entire 2016-2017 Season, leaving Double Bay Wharf, alongside the clubhouse, at 2.15pm.

NOTE:   Next Sunday’s race is the final race before the New Year. Racing with resume on Sunday 8 January.