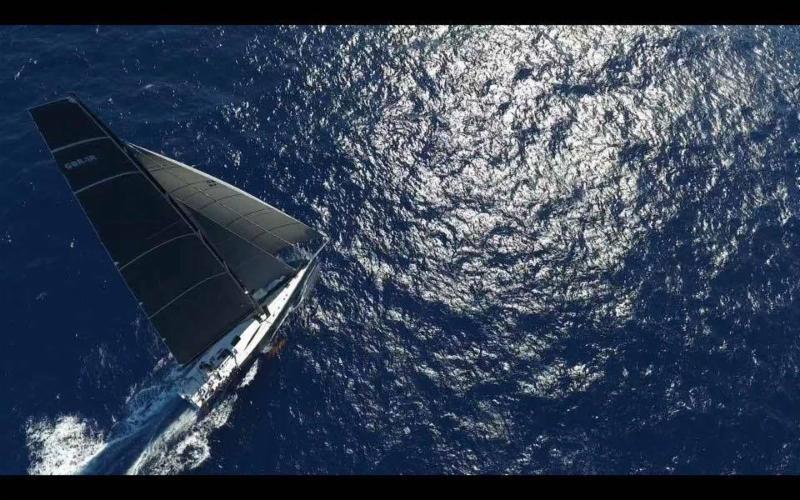 Lloyd Thornburg's American MOD70 Phaedo3 is flying towards Grenada's Camper & Nicholsons Port Louis Marina and expected to touch down in about 24 hours. Mike Slade's Maxi 100 Leopard 3 is racing against the clock in an assault on the race record. The IRC Fleet and Class40 Division are getting a savage taste of ocean racing.

MOD70 Phaedo3 is screaming towards the finish line outside Port Louis Marina in Grenada. Skipper Brian Thompson has told the crew to fasten their seatbelts and stow their dinner tables. For nearly a week, the crew have had no more than a few moments sleep in cramped conditions, living off freeze-dried mush and warm desalinated water. A hot shower, a proper bed, delicious food and a cold beer is just a few more hours away! A warm welcome is set for Phaedo's arrival and for Giovanni Soldini's MOD70, Maserati. However the Italian flyer is estimated to be as much as 24 hours behind their rivals.

The crew aboard Mike Slade's British Maxi, Leopard 3 have a huge lead on the water over the IRC fleet, vying to win the IMA Transatlantic Trophy. This morning the powerful Maxi had reduced speed as they passed through a transition zone created by a low pressure system to the north and solid trade winds in the south. The clock is ticking away, as Mike Slade explains via satellite connection:

“What a night! Almost every sail we have took a share of a battering; 80 degree wind shifts and wind speeds ranging from 6 to 40 knots, demanding at least 12 sail changes. Leopard never knew what the fuss was all about! Now into more stable conditions charging along at 16 to 20 knots, still hoping for line honours but the record will be won or lost by a matter of minutes. Once again the drone caused excitement reaching huge heights taking fab photos. We need to finish by 6 December at 1900 GMT, 1500 local time. After last night we all need a rum or two, but will have to wait. 1,500 miles to go.”

Leopard's complications have been to the advantage of the variety of yachts that are also racing in the IRC Division. Arco Van Nieuwland & Andries Verde's Dutch Marten 72, Aragon has continued to perform. Approaching the halfway mark, the team are back as race leaders contesting for the RORC Transatlantic Race Trophy, and making a move south to hook into the trade winds. Leopard 3 is estimated to be in second overall, but should increase speed over the next 24 hours which may propel the team back to the top of the leaderboard. Swan 82 Stay Calm is already further south than Aragon and could well make up time on their immediate rival. All of the IRC fleet have now turned south away from the highly unusual westerly winds to the north. However the last 24 hours have been tough going for the Class40 division and smaller yachts in the IRC fleet.

Leader of the Class40s, Halvard Mabire & Miranda Merron's Campagne de France has sent in their latest blog. The team are racing Two Handed:

“Campagne de France, somewhere in the Atlantic on a very dark night. We must have read the wrong brochure. Trade wind route it isn't. Still upwind since the night before last, but on the way to better things, although the wind is refusing to match the forecast at the moment. Upwind = bouncing/ slamming off waves and into troughs. Getting water into the Jetboil and then pouring boiling water into a mug and keeping the contents in it while placing the lid on it are activities best undertaken in foul weather gear and boots, despite the heat. Every four hours we receive a position report (or punishment report depending on performance), where we see how Campagne de France, or more precisely her crew, has fared against the competition. There are still 2,000 miles of race course to go. Many more miles than that to sail as the direct route is closed, at least if we want to get to the finish this year, and a lot can happen in that time,” writes Miranda Merron.

James Heald sent an SMS via satellite from on board his IRC Two Handed entry, Swan 45 Nemesis. James and his crew Ben Harris have 2,000 miles to race to complete an epic challenge.

“Man thinks he's king of the world. Yet Mother Nature rules out here as we beat into 20 knots, of that there is no doubt. Course is sort of towards Grenada; it's going to be a long one. Boat and us getting a beating today and looks set to continue before we hit forecast light winds again. Perhaps the southerly route via the Cape Verdes would have been more favourable, though I still believe in the Rhumb, or is it Rum! Routine and camaraderie are our friend, from our daily Iridium forecast we continue to execute our best attempt at using these contrary conditions to our goal. Ben broke a finger nail today. Me, I am just racing my yacht in an iconic race on my own terms and at times wonder WTF I am doing. One things for sure, it's a true adventure and that's what we were put on this planet to do: explore, sail, live. Checking off watch,” Capt James Nemesis.