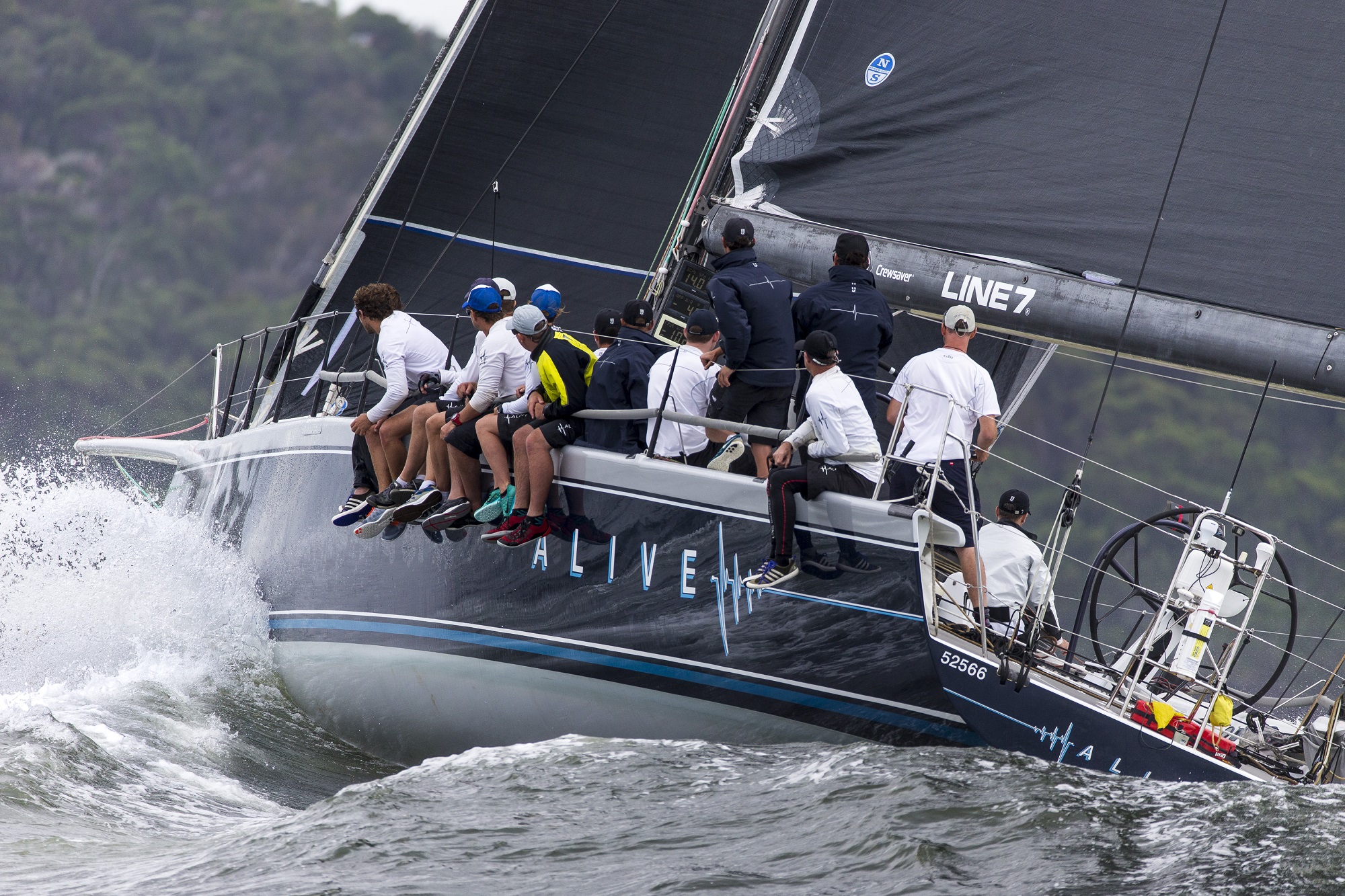 Yesterday’s breeze settled overnight leaving a confused sea state and 5 to 8 knots for day two of the Australian Yachting Championship. Similar to yesterday, today’s racing consisted of a 19nm passage race to Coogee Beach and back.

Split again into the two divisions racing kicked off at 1100 for Division A boats with Division B following suit.  With shifty conditions Principal Race Officer, Dennis Thompson, had a tough job to complete today. Dennis said,

“Today was a challenge; wind speed was down and there were rain cells coming through over the day pulling the wind all over the place. We had 100 degree shifts that we tried to keep up with by doing a couple of course changes, but it’s not all possible with the long passage race courses.”

After rounding a seaward mark less than a mile outside the Heads, boats proceeded to the top mark at Coogee Beach. After rounding this mark the boats set course to a bottom mark just in front of North Head followed by the seaward mark again before heading to the finish line at the same location as the start. Having the course set this way creates a level playing field for competitors. Dennis explained,

“Today we added a couple marks with longer legs that allowed for different points of sail for all the yachts which is good for IRC and ORCi, so not one particular boat will win.”

Team Beau Geste continued their impressive sailing in the tricky conditions with proactive race decisions and relentless trimming that made them gains on the upwind and finishing them nine minutes ahead of the fleet in IRC on corrected time. Alive also continued their solid sailing and secured a win in ORCi to Team Beau Geste. They now lead ORCi overall, a great place to be before going into two days of Windward/Leeward racing. Skipper of Alive, Duncan Hine, commented on their racing today,

“We focused on trying to find our groove and I only see us getting better over the next couple of days. The breeze was flipping around a lot today and with the size of the boat, we needed to make decisions and stick with them; we were tossing up which shoot to use on the run and chose to use the ‘Masthead 0’ and thankfully it was the right call. We’re looking forward to the racing over the next couple days and hope we can keep our lead.”

Division B boats had to work hard through the choppy conditions today. Philosopher sailed consistently well today and had a stronger day than yesterday, earning them a second place to Bushranger in IRC and ORCi and also placing them second overall for both. Despite their skepticism in how they’d go in lighter air with their heavier hull, Bushranger sailed a consistently well race taking their second bullet for the regatta and giving them a decent lead to their close rivals in IRC and ORCi.

Nautical Circle continued their convincing sailing today in PHS but were overtaken, in corrected time, by their smaller sister in the Archambault family, Precision, who took the win in the end. This boosted Precision’s overall seating to second to Nautical Circle.