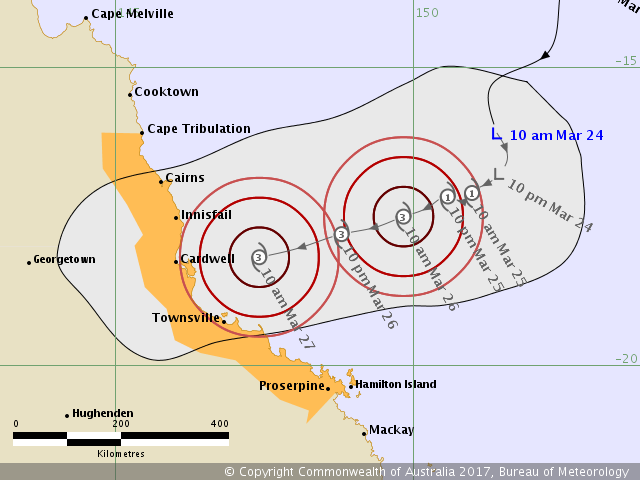 North Queensland remains on high alert with the tropical low in the Coral Sea likely to intensify to tropical cyclone strength this weekend.

The next name on the cyclone list is #CycloneDebbie.

“Communities between Cape Tribulation and Proserpine are urged to prepare now for a potential crossing anytime between late Sunday and early Tuesday, but the most likely scenario is for the cyclone to make landfall between Cairns and Townsville on Monday,” said Mr Gunn.

“There is always a degree of uncertainty in forecasting cyclones, for this reason we urge the public to stay tuned for the latest official warnings from the Bureau of Meteorology and follow the advice of local emergency services.

“The intensity of the cyclone will hinge on how much time the system spends over the water. If the cyclone speeds up, it is likely remain at the lower end of the spectrum, but if it crosses on Monday or Tuesday there is the potential for it to intensify to severe tropical cyclone strength, Category 3 or higher.”

Heavy rains are likely to continue well into next week for northern and central Queensland. A Flood Watch has also been issued today.

Exercise caution and avoid travel when warnings are in place. Never walk, ride or drive through floodwaters.

There have been three tropical cyclones already this season, Yvette in December, Alfred in February, Blanche in March. Cyclone Caleb formed in the Indian Ocean near the Cocos Islands yesterday (23 March 2017).

The last cyclone to cross the Queensland coast was Tropical Cyclone Nathan, which crossed near Cape Flattery, north of Cooktown (20 March, 2015) as a Category 4 system.