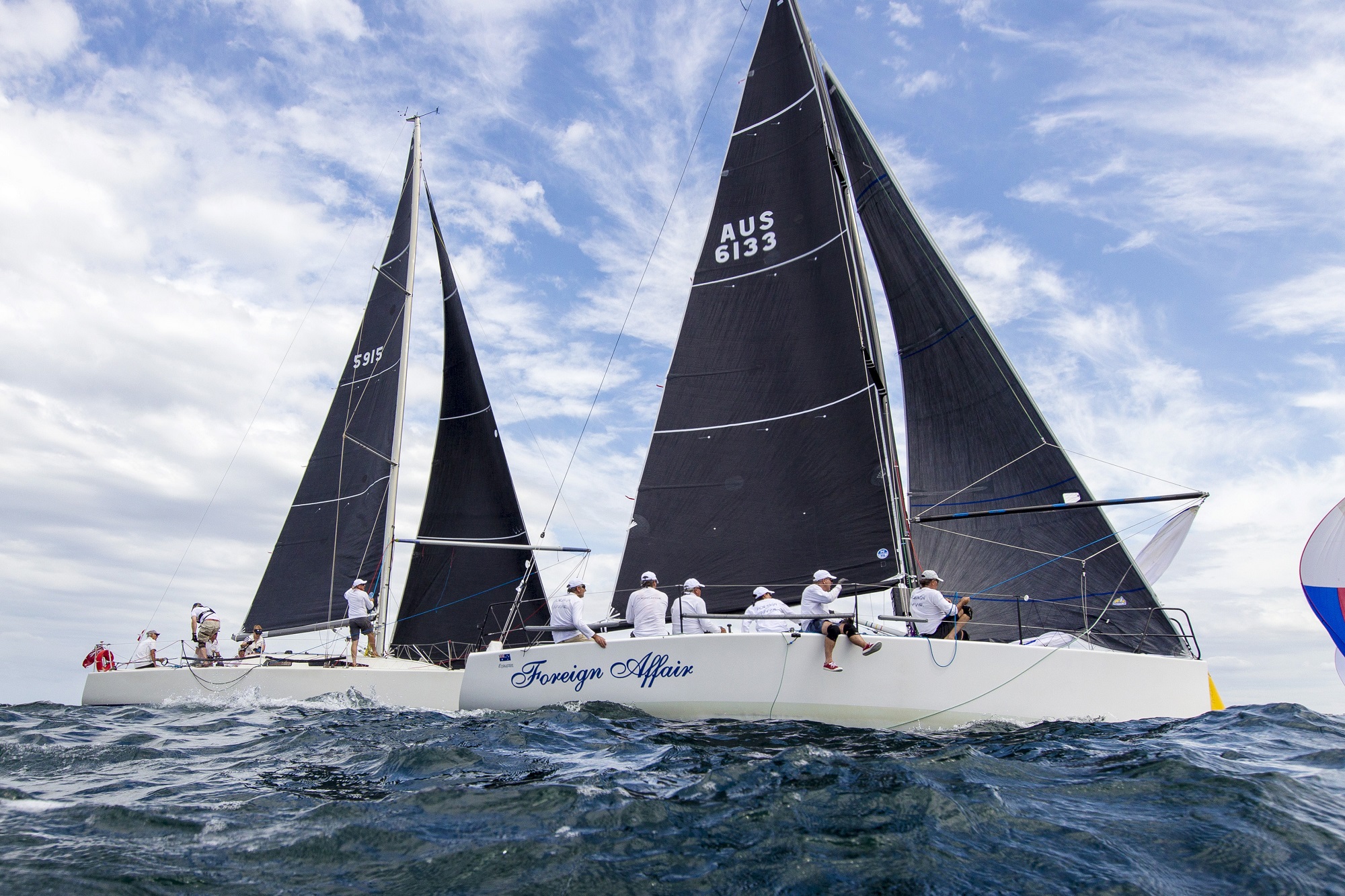 Conditions lightened off for day three of the 2017 Australian Yachting Championships when the near 200 sailors ventured out of the Heads for the second last day of racing for the regatta.

Racing today was held off Manly Beach and consisted of three windward/ leeward races. The breeze has progressively become lighter over the past couple of days and today’s conditions were a soft 5 knots for the first race picking up to 8 to 12 knots for the last couple of races with the Manly swell adding an extra dimension to today’s racing.  Following a short postponement, as the morning breeze settled and a sailable 5 knots dispersed over the race course, the first race kicked off with a separate start for Division A and B boats.

“’Team Beau Geste’ are one of the best sailed and most competitive boats in Australia so we would be delighted if we continue our quality sailing tomorrow and took a podium position overall. With all the reaching involved, the passage races are our Achilles heel so we were very happy with over third place yesterday. We previously won Division B back in 2014 and haven’t done this regatta again until this year. We were unexpectedly placed in Division A so thought our best strategy is to attack on the Windward/ Leeward races, use our symmetrical shoots and just hope for lighter breeze. All three elements aligned today and we were delighted with our result!”

‘Team Beau Geste’ lead Division A IRC with five bullets over five races; they go into the final day with a guaranteed podium position. Only one point behind ‘Team Beau Geste’ in ORCi is ‘Alive’; tomorrow’s three races will be a dual between these two boats.

The lighter breeze and close quarter sailing added pressure within the Division B boats so there were a mixed bag of results seen across the fleet. ‘Bushranger’ maintained their lead overall for IRC and ORCi but not without tough competition from ‘Next’ and ‘Justadash’ who both took a win over the three races. Skipper of ‘Justadash’, Philip Dash, tried to keep everything simple for today’s racing. He said,

“We generally struggle in the light stuff so we were happy when the breeze picked up for the last couple of races. We tried to keep in contact with the very competitive fleet by keeping things simple with our crew work and boat handling. It’s been a great regatta with great competition.”

‘Nautical Circle’ took a step back after two solid days and currently sit second overall in PHS to ‘Foreign Affair’. Skipper of ‘Foreign Affair’, Matt Wilkinson, was relieved to have a good following a couple of hard passage races. Matt said,

“We enjoyed today more than the past couple of days; reaching doesn’t really suit us but we still enjoyed the sailing out there. Today was a great sailing day; the breeze was solid and the swell was fun. We had great crew work and did a great job with our short course racing. Being a smaller boat we had to tack a few extra times to get clear air but other than that, it was great out there.”

The top three boats in PHS all sit within two points of each other overall so tomorrow’s last three races will determine who will sit where on the podium.

The last day of racing continues tomorrow at 1100 with three races scheduled. The prize giving will commence after racing at approximately 1700 at the Cruising Yacht Club of Australia where 1st, 2nd and 3rd will be presented to those in Division A and B across IRC, ORCi and PHS.