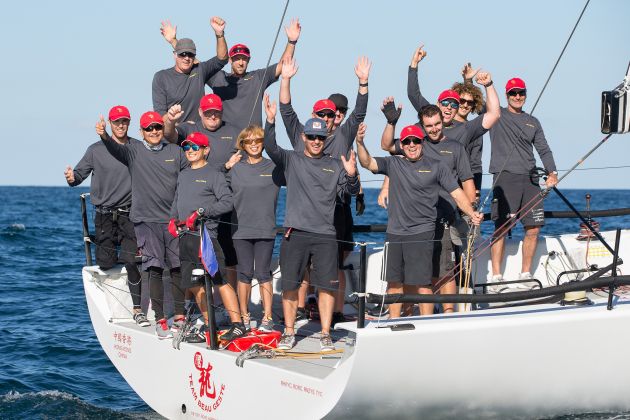 The crew of Beau Geste celebrates its win in the Australian Yachting Championships. Photo Andrea Francolini.

Team Beau Geste have secured their fourth IRC win in as many years at the 2017 Australian Yachting Championship that concluded today, Sunday 26 March. After four days of racing outside the Sydney Heads, Karl Kwok’s ‘Team Beau Geste’ took the win in Division A IRC.

Paul Cayard, skipper of Team Beau Geste, joined the team this year and was happy to add this win to his already impressive CV that includes sailing in the 2004 Olympic Games, 2006 Volvo Ocean Race and numerous Americas Cups.

Paul said, “It was nice to keep the winning streak going. It’s been an interesting week with the conditions giving a bit of everything. I’ve never sailed with Karl Kwok before and he’s been sailing for the past 30 years, so it was a nice experience to sail together. It was also nice to sail with Gavin Brady again as we haven’t sailed together since AmericaOne in 2000. ”

Despite a two hour postponement, two races were completed on the fourth and final day of the Championships in 5 – 7 knots. The final race in a solid 7 knots became a nail biter between ‘Alive’ and ‘Team Beau Geste’ went they went into the final race tied in ORCi for Division A but ‘Alive’ were victorious and have carved themselves in history as the inaugural winners in Division A ORCi for this event.

Skipper of ‘Alive’ Duncan Hine commented, “We’re chuffed with our win! We raced well today and enjoyed ourselves at this event. Our boat is really made for offshore sailing so we think we did well with the varied type of racing over the last four days. We’re happy to be the inaugural winners.”

‘Bushranger’ went into today with a solid lead in IRC and ORCi to close rivals ‘Justadash’ and ‘Next’ but after two bullets in ORCi and a win in IRC they finished the regatta with a near 10 point lead in both ratings.

Gerry Hatton, owner of ‘Bushranger’, explained their win: “I believe there are two key elements in doing well in IRC; they are your crew and your sails. We like to build a crew up and have them ‘learn on the go’, this way they’ve committed to the team and there’s a level of trust between us all built over a number of years. We also have good sails for IRC which helps with our ratings. We were surprised with how well we went in the passage races and very happy with our win overall. We’ll be looking to come to Sandringham Yacht Club for next year’s event.”

The top three Division B PHS boats went into today all within two points of each other so it could have been anyone’s win today but after two bullets ‘Nautical Circle’ secured the win by one point to ‘Foreign Affair’.

Skipper of ‘Nautical Circle’, Robin Shaw, said, “We tried to continually improve over the regatta and I think we did just that. We had a couple of great races and fought for clear air today, which was important. We decided to use the symmetrical kite today as yesterday’s racing using the asymmetrical kites didn’t go so well. It paid off and we won the last couple races in PHS, which is the best way to go in this rating system. Overall, it’s been a great regatta.”

Following the conclusion of the last race, competitors ventured back to the Cruising Yacht Club of Australia where the top three winners in each division and rating were presented with their respective trophies.

The 2018 Australian Yachting Championship move to Sandringham Yacht Club following the Festival of Sails. Dates for next year’s Championships will be from the 26 to 29 January.