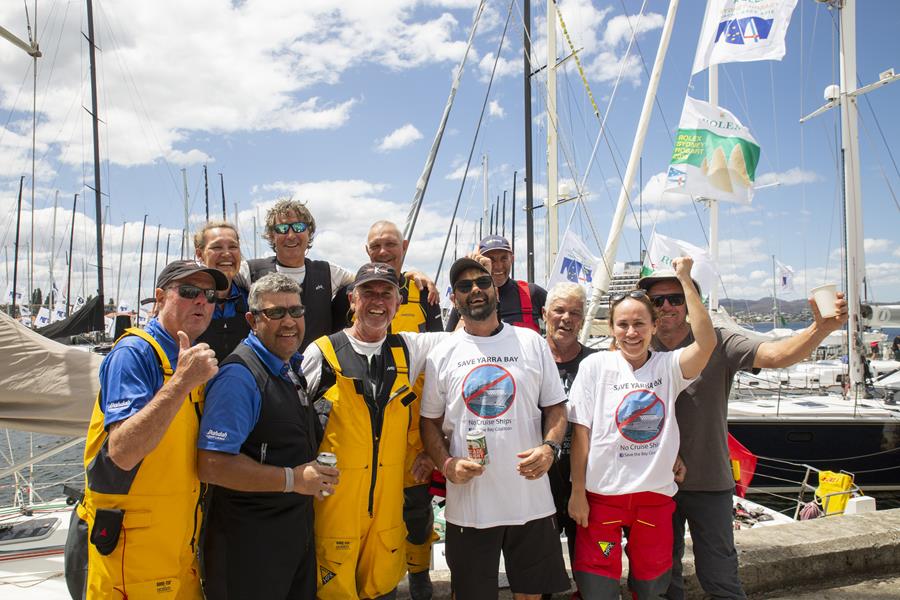 Wayne Jones and his team on Tribal Warrior, the first indigenous team to compete in the Rolex Sydney Hobart Yacht Race, have achieved the dream of a lifetime – to start and finish the race – and they chose the 75th running of the Cruising Yacht Club of Australia’s race to do so.

“The dream has come true – we’ve done the race,” an exultant Jones said.

Tribal Warrior, a Beneteau First 47.7, crossed the finish line at Castray Esplanade in Hobart shortly after 12.53pm today, New Year’s Eve, to loud applause. Arriving at lunchtime, she was taken on a lap of honour past the dock that hosts the Taste of Tasmania. Jones and his crew were totally unprepared for the reaction from diners, which could only be described as a standing ovation.

“It was so emotional. I didn’t realise what it was about. People lined the dock and were calling out to us and waving and crying – supporting us – it was unbelievable,” Jones, close to tears, said.

The best part of the race, he said was, “Finishing. To be here in Hobart.”

The hardest part: “Big waves in Bass Strait – and last night going sideways, even though we were prepared for the big conditions. We had everything to deal with in this race; things broke (on the boat), the weather was horrible, especially towards the end, some of the crew was sea sick and had minor injuries – nothing bad – when things were breaking.

“I kept wondering why this was happening to us. Some suggested it was the ancestors either testing us, or giving us a hard time, but no matter what, we were not giving up.”

The NSW sailor hatched the plan to do the race around three years ago. “We had our trial run in 2016 on Southern Excellence – most of the same crew are with me now.”

On celebrations today, Jones explained, “We had a no-alcohol policy on the boat, and after such a hard race, we’re going to have some beers.”

The theme continues early this evening when the first indigenous owner/skipper in the race, Rebecca Connor, steers her Beneteau Oceanis 473 Wonderland over the finish line around 7pm – in time to savour a Tasmanian New Year.

Eight yachts remain at sea, the last two boats likely to arrive are the Tasmanian entries, Natelle Two (Laura Roper) and Take Five (Ian Gannon). The two are expected to arrive in the early hours of tomorrow morning and in the afternoon respectively.