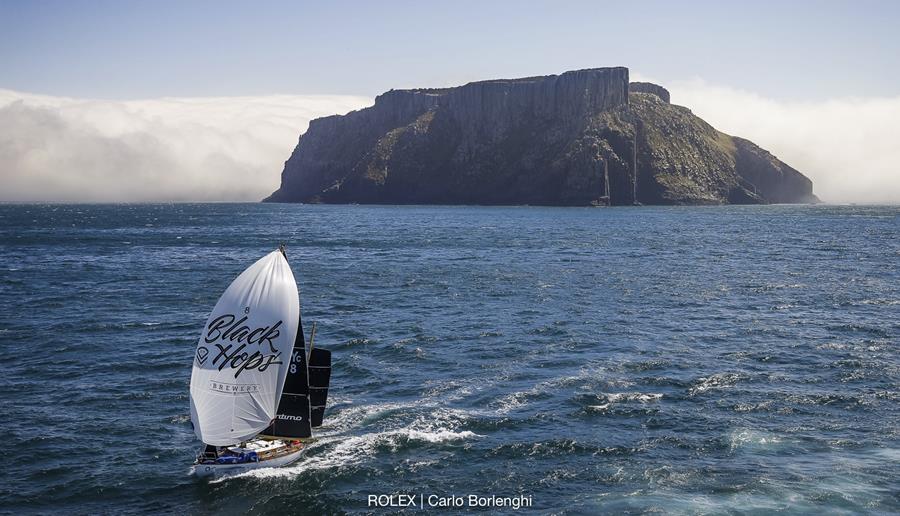 Katwinchar making her way down the Tasmanian coast in the Rolex Sydney Hobart. Credit ROLEX/Carlo Borlenghi

The crew of Kialoa II may lament having seen their understandable hopes of winning the Grand Veterans class in the 2019 Rolex Sydney Hobart Yacht Race slip through their grasp. But the 73-footer that won Sydney Hobart line honours in 1971 still made for a majestic sight.

The aluminium boat, converted from a sloop into an S & S yawl in 1968 by its then owner, American Jim Kilroy (he had her built in 1964), sat moored at the docks in Hobart.

As did the sight of the two other Grand Veterans boats from six entries that had finished by 11am Monday – the Sparkman & Stephens 47, Love & War; and the Knud Reimers 61, Fidelis.

The collective beauty of the three Grand Veterans entries at the dock, among more contemporary boats after finishing the Cruising Yacht Club of Australia’s race, will increase once the last three entries in the class join them – Katwinchar, Windrose and Natelle Two.

The return of the Grand Veterans was due to the large number of such boats entering, offering a fitting throw back in time for the race that is celebrating its 75th year.

While winning is an aim, competing in the Rolex Sydney Hobart is also about the experience of sailing the 628-nautical-miles south from Sydney Harbour to Constitution Dock in Hobart.

Paddy Broughton, the co-owner and skipper of Kialoa II, said this year’s journey on the boat was a: “Classic Sydney Hobart race. Deeply frustrating at times and brilliant at others.

“Like all these races, you’ve got to do them a number of times, and the pitfalls all seem to be different every time … We fell in a few holes, but we basically had a pretty good time.

“The worst experience was when we went around Tasman Island and were sailing away confidently. We had just overtaken a whole bunch of boats, which was probably the best experience, and then we fell in a hole and they all sailed passed us.”

As Broughton spoke, it was Sunday evening, soon after Kialoa II had crossed the Derwent River finish line at 6.33pm. She was the 60th finisher over the line with a race time of 3 days 5 hours 33 minutes 8 seconds. She was the first Grand Veterans entry to finish the race.

At 11am, the 32-foot ketch, Katwinchar, owned by Bill Barry-Cotter and built in 1904, led the category. She was well past Tasman Island and nearest of the trio still to the finish line with her star cast including 42 Sydney Hobarts veteran Michael Spies, Robert Case with 34 Hobarts and champion American sailor, Scott Kaufman.