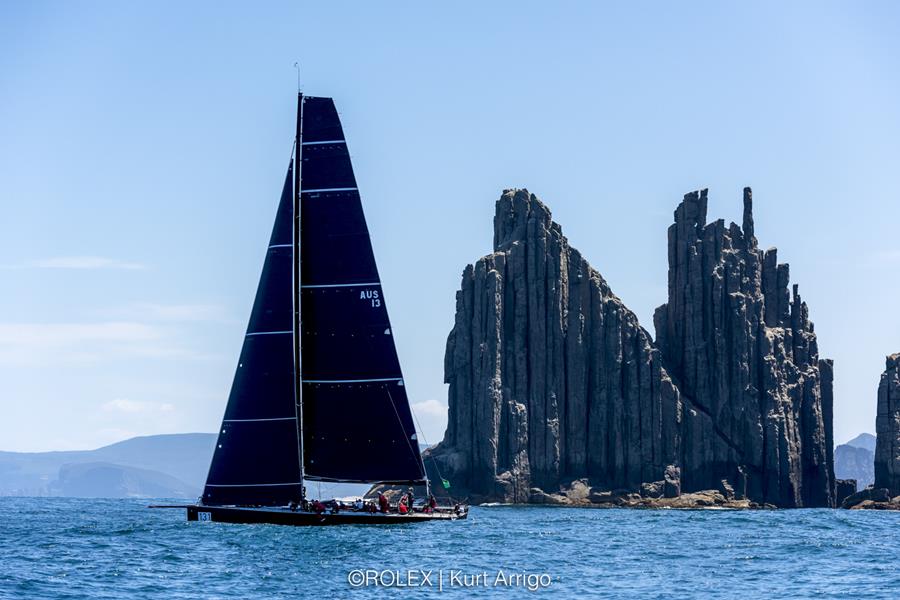 Chinese Whisper spent some time at the top of the overall leader board and tackled the fickle conditions well. Credit - ROLEX/Kurt Arrigo

Australian sailing legend Michael Coxon has long been linked with the Rolex Sydney Hobart Yacht Race through his role as the master tactician on many successful super maxi yachts.

But his imprint on this year’s 75th running of the Cruising Yacht Club of Australia event will have nothing to do with any of the five 100-footers that finished on Saturday morning.

It will be on a much smaller, but nonetheless impressive yacht – the David Griffith-owned JV62 Chinese Whisper – which was seventh to finish the 628-nautical-mile race at 5.24pm yesterday. For Coxon, this year’s Hobart will mark his 31st start in it. And when he stepped foot back on terra firma, it was clear that win or not, this 75th race will forever hold fond memories for him.

“To be sailing on a 62-footer is a pleasure, because it’s big enough to be fast, but it is small enough and light enough you can actually handle it,” Coxon said. “It’s not like having an army squad with you. It’s a crew full of sailors who know what they’re doing and just get into it.

“We didn’t have a park up in the Derwent River. We actually smoked the last bit. That’s somewhat unusual to smoke home. It was one of the nicer sails I’ve had in a long time.”

Coxon, who has sailed on super maxis like Wild Oats XI, Alfa Romeo, Investec LOYAL, as well as a host of other boats that have reaped him five line-honours victories including one that also won overall (Sovereign in 1987), also praised Chinese Whisper’s crew.

“It has been one of the smallest lead time preparations because of the modification to the keel and bowsprit,” he said. “We only went out sailing the weekend before with the race group and going through the basics – reefing and what not – we didn’t do any crew training.

“But the crew is of such a calibre that we all know our jobs and what we are doing,” he said of the likes of Adrienne Cahalan (the only woman to sail 25 Sydney Hobarts – this was her 28th), Stacey Jackson (skippered an all-female crew on Wild Oats X to second overall last year), Tom Braidwood and others.

“It’s the first Hobart I’ve been on where there hasn’t been any gear failure. We didn’t break anything.”

Chinese Whisper was one of 16 boats to finish between 2.13pm on Saturday when the Reichel/Pugh 66 Alive crossed the line in sixth place on line honours and 5.50am Sunday when Stay Calm Hungary, another TP52, reached the finish as the 21st boat to do so.

A number of those finishers were TP52s of which the first at 7.18pm was Matt Allen’s Ichi Ban, winner of the 2017 Rolex Sydney Hobart. Ichi Ban finished 11th across the line and today is in the box seat for overall victory.

The battle between the TP52s was a tense one. Craig Neil, co-owner with Bob Steel of Ichi Ban’s main rival, Quest, was the 15th boat to finish at 9.59pm.

“First night out we came in looking quite strong. Next day there was a lot of reaching which didn’t suit it us,” Neil said. “Then last night we came home – we raced really hard through the night. I woke up this morning and we were back up in front again.

“It was a real tussle to the end. Unfortunately for us, we got caught in Storm Bay. We sat there, tried to move, but we couldn’t get going, and some of the other people did better.

“We took a wider line into the Bay thinking that we would keep ourselves out of trouble because we could see some boats held up there. We came around the corner and bang, it happened to us.”

Barry Cuneo, owner of the TP52 Envy Scooters, finished 14th over the line at 8.05pm. The Commodore of Royal Queensland Yacht Squadron was happy with how his boat fared after owning it for two and half years.

“We have been in a constant development program to get the boat up to the latest generation and the latest technologies,” he said. “It is starting to pay dividends. In the year coming up to this race, we had three firsts and a second in the four events we have been in. We are very happy. We’ve come in as the third TP.

“Everyone is stepping each other up the ladder. It’s making us strong and stronger as a fleet inside the fleet, which is why the TPs seem to be coming out on top all the time.”

Chris Townsend, co-owner with Matt Donald of the TP52, Gweilo, finished 13th, at 7.42pm and was all smiles afterwards.

“Better than last year,” he said. “We’re heading in the right direction. It was a great ride, a lot of fun.

Donald agreed, saying: “Challenging at times, but we managed to get a fantastic result.”

Meanwhile, the 69-foot maxi Naval Group, owned and skippered by Sean Langman, was eighth on line honours at 5.26pm yesterday.

After starting on the first line with the super maxis, she fell into a hole on the first night and lost her advantage.

“We had great leverage on all the TP52s and Chinese Whisper; some 30 miles,” Langman said. “Then this morning [Saturday] they were 10 miles in front of us … We played a lot of catch up and got a fair bit of leverage on them going around Tasman Island. Then we hit a major lump of weed going across Storm Bay.

“We decided to stop, let Chinese Whisper pass us, so we could stay in touch with URM [a Reichel/Pugh 72], which was important for our division position.

“Then we thought we should have a proper boat race with Chinese Whisper. We did that, got in front of them, then URM went to the other side of the river.

“We did the right thing. We should have covered URM for our division.”

For Jacek Siwek, the Polish co-skipper of the Australian-owned Volvo 70 Maserati, racing in his first Sydney Hobart will leave an indelible mark on his memory.

“You are never fully happy. You always want to do better. But it’s our first Hobart,” he said. “We are a group of amateurs supported by a very professional team of five. So, it is difficult to compete against the best teams and fastest boats in the world.

“We are happy; 12th place for our first Hobart is really a good performance.”