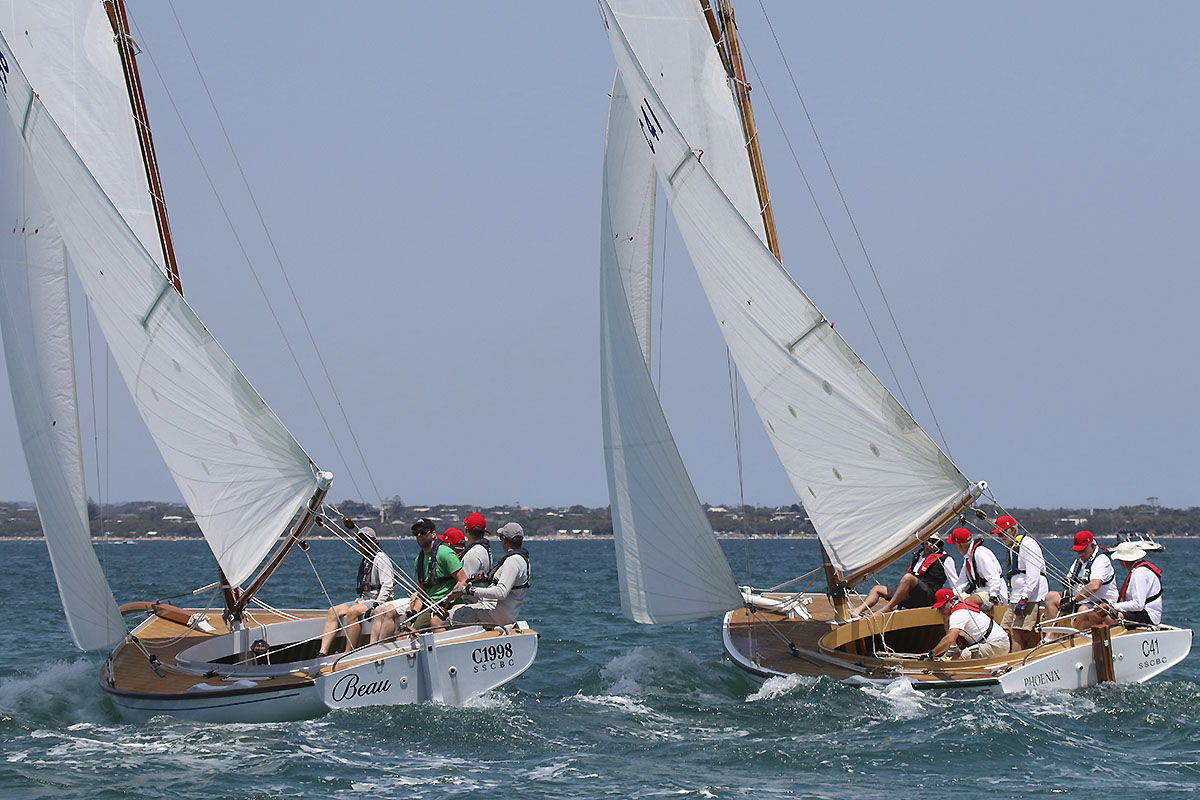 Light breezes, sunshine and warm weather greeted the competitors on Day Two of the 2019 Mercedes-Benz Mornington Couta Boat Association National Championship being held at Sorrento Sailing and Couta Boat Club (SSCBC) on Port Phillip. Every one was hoping the predicted sea breeze would come in.

By the time racing was due to begin the breeze had built to around four knots from a bearing of 185 degrees. Windward leeward courses were set for both Divisions, at a distance of 1nm, with the expectation of a good sea breeze.

However at 1300hrs the AP was hoisted, and we waited for the new breeze to come in. The course was shortened to 0.8 nm, and the boats eventually got away at 1330hrs, with two clear starts in around six knots. The breeze averaged eight knots over the duration of the race.

By the start of the second race the breeze had increased to around 14 knots. It averaged around 17 knots, but there were a few gusts of 25 knots. Division Two was started first because they finished much earlier than Division One, getting away 1500hrs. Division One started at 1514hrs. Both fleets were set a windward leeward course with a windward finish.

The racing during the whole regatta was very close in both divisions, as highlighted in the number of boats who have equal points. You will need to check out the results for your selves to see what I mean.

This year the Division One winner of the Mercedes-Benz Mornington Couta Boat National Championships was Romy. Nigel Abbott who skippered Romy said, “We felt that we were lagging behind last year, a bit out of reach from the better boats. During the off-season David Hendy spent a bit of money, we have new sails, a new centerboard, and some under the water work. So this year we are defiantly competitive.”

Division Two was even hotter. Peter Pan skippered by Nick Sankey was first. Just behind him was Aliscia, skippered by Micheal Cantwell, and Joan skippered by Trevor Martyn – both on 11 points. Only one point behind these two are Lucy skippered by Michael Golding, and Fiona Skippered by Graham Cunningham. This will make next weekend’s Portsea Cup very interesting.

Nick Sankey was excited with his win saying, “The first race was pretty perfect for Peter Pan, but the second race today was really challenging for us. They were really tough conditions. We were travelling really well until the last mark, we got around that and we found the last leg really hard. I had my daughter Elle, who is 14 years old on board, she was there as our tactician. It is always great to have young people on board.”

Scott Llewelyn the SSCBC Club Captain was very happy with how things went. “I think the whole Couta Boat community have come together this year. They have formed really good teams, and their boats are well sailed, and from a club perspective, it is really encouraging to see people having a good time and fun when sailing.”

“There is always the competitive side of things, but you look at this presentation we have had 25 Division Two boats and 28 Division One boats, and we are all on the lawn here just enjoying it. That’s what sailing is all about. Its great winning, but it is also nice to have to have good enjoyment out of the hole event.”

People are starting to understand that this is a class you can sail, it is a competitive class, and with younger people coming into the class, hopefully they will move up the class at a later stage. The club encourages younger people to come and sail the class because it is really good fun.”

“As always a regatta cannot happen with out the volunteers, so thank you to all the on and off water volunteers.”