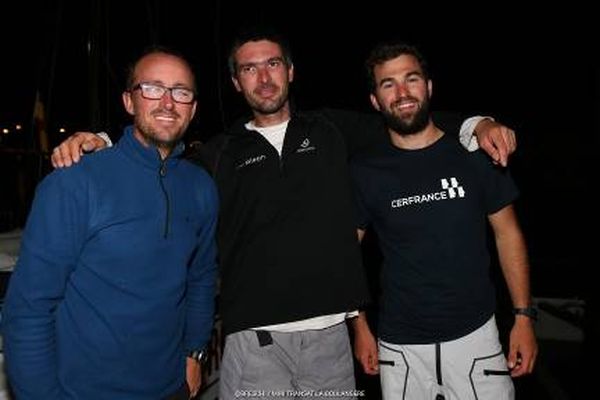 The finish of the first leg of the Mini-Transat La Boulangère unfolded with incredible suspense in the prototype category overnight in Las Palmas de Gran Canaria.

In very light airs, the three main movers and shakers of this 1,350-mile course setting sail from La Rochelle fought for victory right to the wire and ultimately it was Axel Tréhin who was first across the finish line (02:36 UTC) after 8 days, 17 hours, 58 minutes and 28 seconds of racing. Taking second was François Jambou (6 minutes and 22 seconds behind the winner) and Tanguy Bouroullec (26 minutes and 07 seconds after the first place). The three sailors give us the low-down on this extraordinary first act.

1st Axel Tréhin (Project Rescue Ocean): “This first leg really had it all. There was breeze, less breeze, some upwind, some downwind and a bit of reaching…. There were moments where strategy was called for and others where pure speed was the order of the day. It was really interesting.

“We were expecting it to be a fairly quick straight line run after Cape Finisterre. In the end the game opened right back up and it was important to be versatile. I was beginning to fret yesterday. I said to myself that François (Jambou) and Tanguy (Bouroullec) had got there before the wind died, but then I heard some chatter on the VHF and understood that they were stuck next to each other. I was absolutely stoked!

“I positioned myself to the right of them and that’s exactly where the fresh breeze came from. I drew virtually level with them with the pressure. At the last minute, there was a big lift to the right, like a gift from heaven and that was it, a done deal! There is precious little separating me from François and Tanguy, we’re tied, except I won! That’s a great feeling going forward and certainly better than last time where I was 2nd in the first leg.

“Next up, I want to sail a good second leg to finish off the job. We’re really going to be given a run for our money so it’ll be a heck of a battle, but I’m not worried!”

2nd François Jambou (Team BFR Marée Haute Jaune): “I found this leg tough. Mentally, windless zones are complicated. The descent along the coast of Portugal was boisterous and you could easily have broken everything. To my mind, the boat was leaping like never before. The waves were really steep and it felt like the boat was going to open up every time.

“I had a great lead of up to 40 miles. When I arrived off Gran Canaria there was 10 knots of breeze and I couldn’t see anyone on the AIS. I thought I had the race in the bag, but that’s not how things panned out at all. Axel and Tanguy came back into the game with the pressure and there was nothing I could do. Axel was driving in at 8 knots and I was making 0. I got going again once he was beside me but I didn’t have the right sail.

“It’s hard to finish 2nd when you’ve led for five days, but that’s also what makes offshore racing so great; the fact that there are always twists and turns. It’s a race and we’re all keen to win. But I’m 2nd and I’m not going to be a spoilsport. I was beaten by a very good sailor. I’ve satisfied the objective I had at the start; I’m still in the game. Axel, Tanguy and I are tied. Outright victory is still very much within our grasp. I’m determined to succeed in the second leg.”

3rd Tanguy Bouroullec (Cerfrance): “I’m really happy to have made the finish and secured a spot on the podium! It was one hell of a finish with Axel and François. There was a lot of suspense at the end. It didn’t work out for me, but the gap isn’t catastrophic.

“I’d been trying to make a comeback for the past 3-4 days so as to limit the damage, because I knew that François had the edge. I lost some ground when I tore my medium spinnaker along the coast of Portugal so I finished the leg under-canvassed.

“All three of us arrived in Las Palmas together. Axel had a 7-mile deficit a few hours ago and just managed to overtake us at the end. It’s pretty crazy! After that, François and Axel finished with a match race two miles in front of me. It cost me a 26-minute deficit in the end but I’ll take that. It’s still all to play for in the second leg!

“The exit from the Bay of Biscay wasn’t easy. Two fronts rolled over the top of us. After that, the sea was really violent in the Portuguese trade winds. I had some breakage. It wasn’t easy. For two and half days it was pretty hard in fact and it was important to reduce your sail area so as not to break everything.

“The rest of the leg from there was fairly quiet. We had to dig deep to make up the ground on François, but conditions were nice. A bit of breeze and sunshine, the perfect way to finish!

“I wasn’t able to really put the foils to good use. I didn’t fly in the Portuguese trade wind, instead I was trying to stall my progress so as to avoid damage. However, they did enable me to make up some ground on François, and I made good headway.”