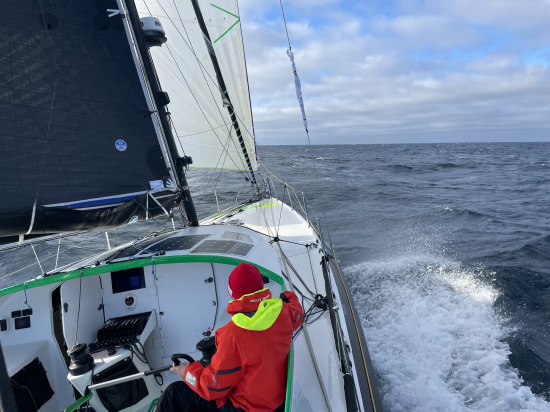 After six days of racing, the first signs of wear and tear are appearing on board the boats and fatigue is putting the sailors to the test in the Transat Jacques Vabre.

Imoca: decisions
It’s bombing southwards and it’s the new Verdier 11th Hour Racing Team – Mālama design, launched last August, that has been the fastest in the fleet over the last 24 hours with nearly 427 miles covered.

The gap is closing at the head of the fleet and matches are emerging at all levels. There are now six of them fighting at the front (LinkedOut, Charal, Apivia, Initiatives-Coeur, Arkéa Paprec and 11th Hour Racing Team – Mālama) as they approach the Canaries.

Talking on the live radio session this morning Charlie Dalin (Apivia) explained why this section of the course could prove crucial, “We’ll decide where we pass the Canaries based on the latest weather forecast. It’s not an easy decision because there are areas of light wind, stronger breeze, zones we’re not allowed to enter and traffic.”

Ocean Fifty: the island game
Already passed the Canary Islands are the Ocean Fifty multihulls that are currently seeing a titanic battle for the lead.

There’s nothing to separate Primonial and Koesio. Sebastien Rogues and Matthieu Souben the co-kippers of Primonial took the lead yesterday after making a long starboard tack to the west of the Canaries before gybing south and avoiding the islands. Since then, Koesio has come back and the two are racing neck and neck.

Ultime: heading for the Doldrums
The Charles Caudrelier / Franck Cammas pair is making good headway, still on port tack, towards the doldrums which they should enter tomorrow. Behind, Thomas Coville and Thomas Rouxel on the damaged Sodebo 3 are 480 miles behind the leaders.

Obviously frustrated at having to stop two nights ago for repairs. Coville said, “We are obviously frustrated, but happy. We are frustrated because we are competitors, but we quickly realised that we were very lucky to be doing this transatlantic race.

“We also had to keep going for the sake of the whole team who worked for it and for all those who support us. We are driven by something beyond ourselves, beyond the job or the competition.”

Class40 : breeze is up
The first 40-footers are finally slipping south into the Portuguese trade winds. In a message received from Banque du Léman, Valentin Gautier and Simon Koster of Switzerland explain the situation,

“Some boats have come back or are coming back very strongly from behind too. I think there will be some big sleeps on board over the next few days as many of us have depleted our reserves!”

The conditions they have had to deal with over the last six days have been exhausting and the return of the wind signals the start of a more stable rhythm on board.