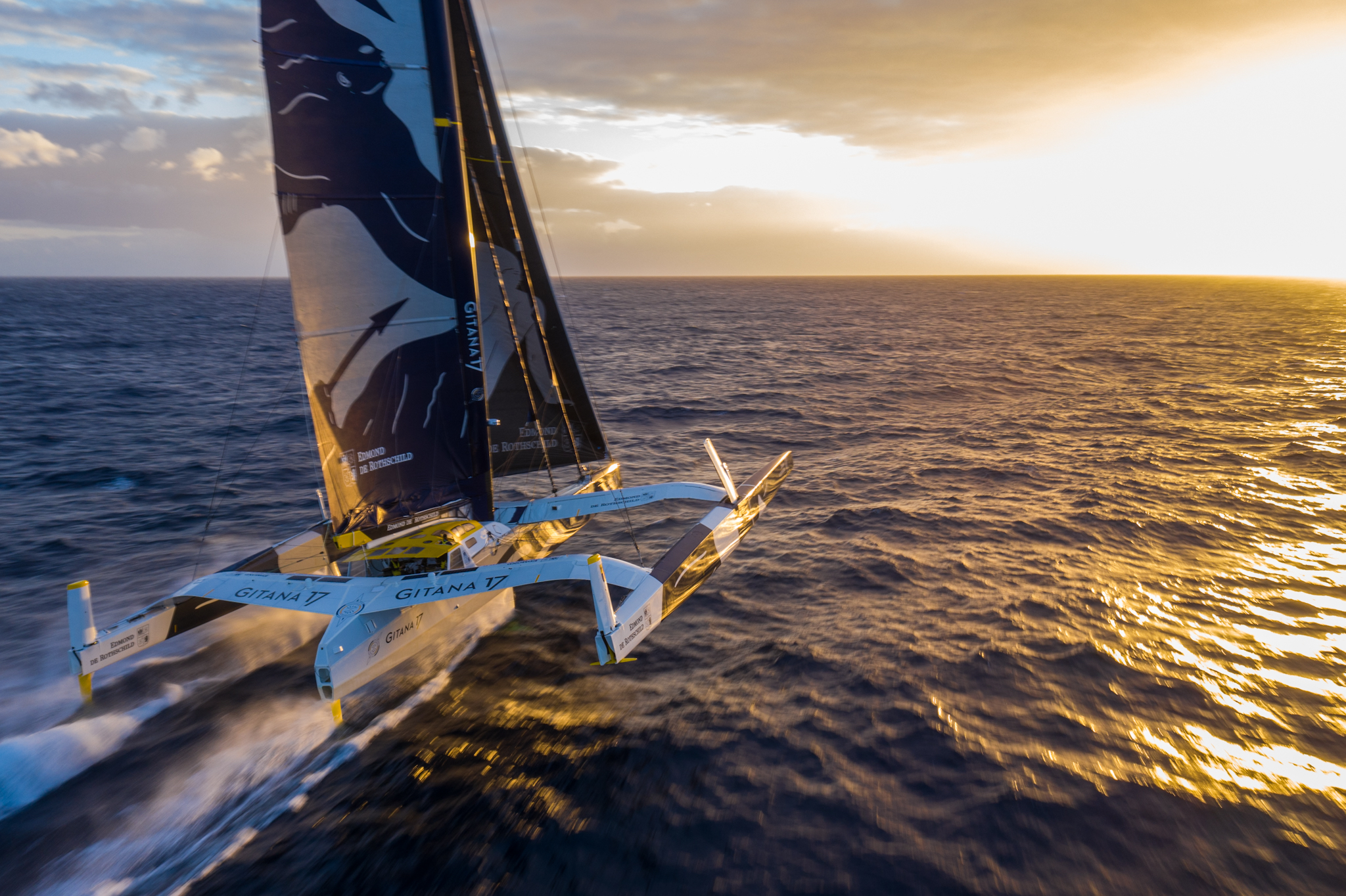 The Maxi Edmond de Rothschild is looking down the barrel of the Doldrums - Yann Riou, Gitana pic

With a lead of more than 142 nautical miles over their closest pursuer, and 256 miles over the third boat at 2pm Saturday local time, Charles Caudrelier and Franck Cammas have increased their lead at the head of the race before they start tackling one of the dreaded passages in this Transat Jacques Vabre tomorrow; the doldrums.

And yet, last night was far from relaxing for our duo aboard Edmond de Rothschild, as play was interrupted by a DIY mission in the middle of a pitch black night. This latest day at sea, the seventh, will be devoted to getting the five-arrow maxi-trimaran making southing, whilst adjusting her trajectory towards their chosen gateway into the Inter-Tropical Convergence Zone.

“We’re relaxing a bit this morning. The boat’s slipping along all on her own and we’re making a little more boat speed than the others, which is refreshing and soothing,” Charles Caudrelier admitted this Saturday morning.

This before going on to describe the rhythm which has punctuated the first few days of racing: “It’s already six days since we set sail and the time has just flown by as we’ve been constantly putting in manoeuvres and working to make headway on the maxi. We’ve really had our nose to the grindstone the whole time.

“We’ve had to be constantly on top of the trimming, going fast and thinking about the upcoming strategy. Our routing cell has done a fantastic job and, for now, they haven’t put a foot wrong! That’s enabled us to gradually stretch away from our rivals despite our minor technical glitches.”

Shortly before midnight, the skipper of Edmond de Rothschild contacted their shore crew to inform them about some mechanical failure. It was impossible to start the engine and charge the batteries as required. In fact, when racing, the engine’s propulsive element is locked, but the latter is used to drive the alternators to recharge the batteries and produce the required energy for all the on-board electronics.

“Usually, when you start the engine, you have more power…”, Caudrelier explained. What this means is that once the fault is identified, the countdown is on to resolve the issue and avoid the blackout so feared by offshore sailors.

“We seriously thought that we’d have to make a pit stop. However, the team responded very quickly and nailed the issue as usual. We switched over to energy-saving mode by killing the supply to all the non-essential systems and Franck helmed whilst I took on the role of mechanic down below for two hours.

“In the end, we got our miracle. Just one of the three screws that was holding the part together had broken and I was able to repair it,” the skipper explained, relieved to have been able to get the situation dealt with so quickly.

To conclude then, nobody got hurt, just frightened, and they lost out on a bit of sleep: “Nights like that are always a little exhausting, as they break up the rhythm we’d set up. Neither Franck nor I were able to get any rest for 6 or 7 hours… but fortunately the early hours of the morning went a lot smoother.

“The light is fabulous offshore of Cape Verde.” However, the morning snapshot sent by Caudrelier reveals the scars of a lively night aboard the multihull. With the problem resolved and behind them, the two sailors have been savouring this moment spent slipping along adding miles to their lead over the past few hours.

They are also casting their minds forward to the next stage of the program, with the weather once again forecast to be complicated to decipher.

“When you’re in front and the first to tackle the doldrums, you’re much more likely to get caught out… but that’s the name of the game,” Franck Cammas concluded from the cockpit of the five-arrow giant.