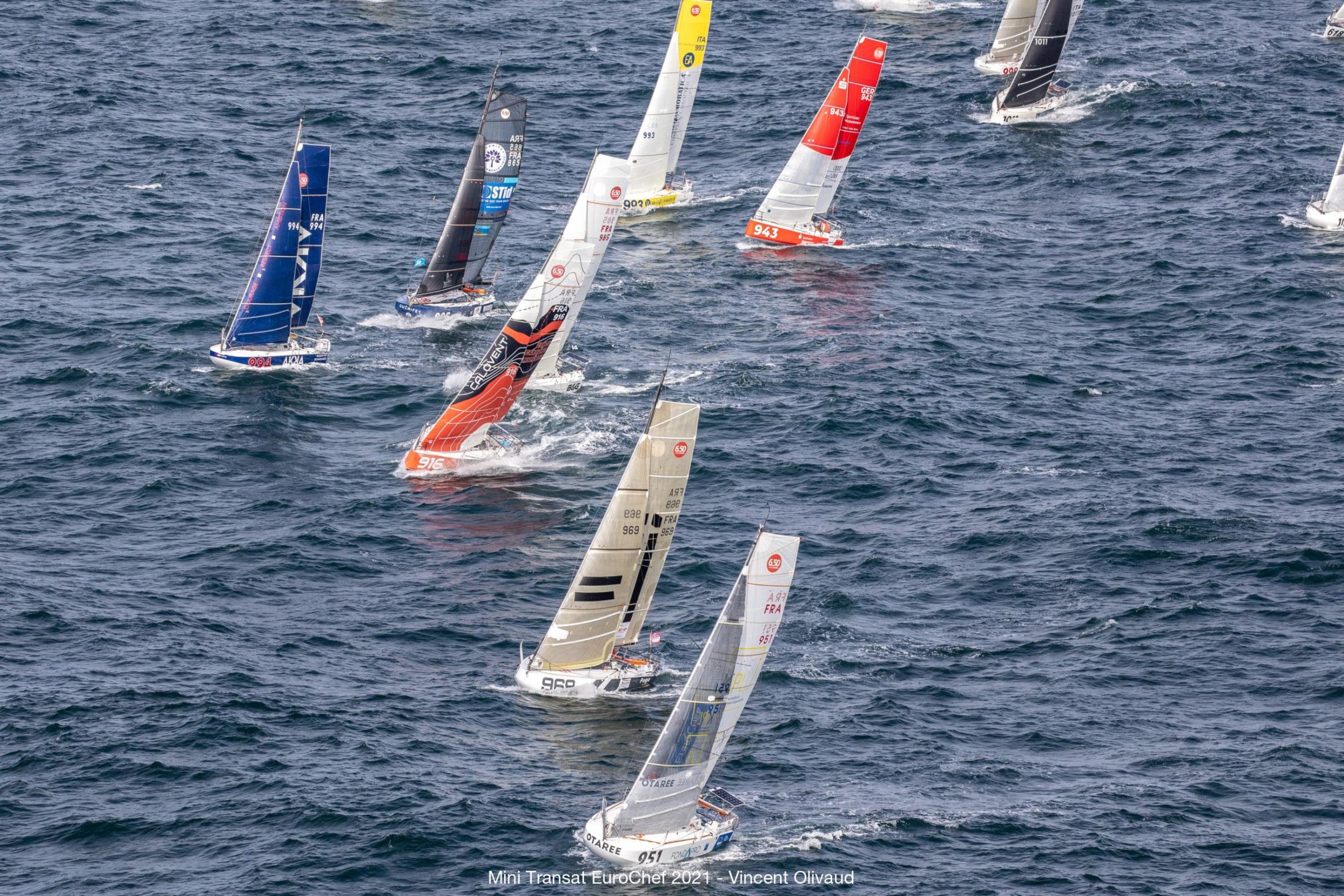 While Pierre Le Roy (1019 – TeamWork) has taken the outright win (prior to the jury’s decision) in Saint-François, the fight continues at every stage of the fleet in the 23rd Mini Transat EuroChef.

In the prototype category, Fabio Muzzolini (945 – Tartine sans Beurre) will likely be next to complete the 2,700-mile passage in the second leg between Santa Cruz de La Palma and Saint-François this evening (midway through tonight UTC).

The trio made up of Tanguy Bouroullec (969 – Tollec MP/Pogo) – Sébastien Pebelier (787 – Décosail) – Irina Gracheva (800 – Path) are set to follow in his wake, albeit in no particular order.

In the production boat category, the competition is becoming fiercer still, even though Hugo Dhallenne (979 – YC Saint Lunaire), who is continuing to make a blistering comeback and is now heading the top trio, is packing a real punch in his bid for final victory.

This Friday, though Pierre Le Roy has taken the win in style in this 23rd Mini Transat EuroChef, 83 competitors are still out on the racetrack, all of them vying to bring their A game into play, well aware that the final sprint is underway.

Among the prototypes, a great slew of finishers is due across the finish line in quick succession and suffice to say that the outcome is eagerly awaited.

Third place is an especially hot potato, set to go all the way to the wire, because although the winner of the first leg, Tanguy Bouroullec, might appear to have it in the bag, Sébastien Pebelier and Irina Gracheva remain on the hunt with a different angle of attack in relation to the island of Guadeloupe.

In their wake, François Champion (950 – Porsche Taycan) and Arno Biston (551 – Bahia Express) are also bunched together and won’t give up without a fight. Safe to say then that the runners-up prizes are still very much up for grabs and the suspense is positively unbearable among the production boat fleet.

Hugo Dhallenne continues his thundering attack
In this category, rarely in the history of the race have we seen the leaders bunched so tightly together with less than 48 hours from the finish. Indeed, the top five are grouped with a 5-mile radius, the bulk of the peloton hot on their heels.

At this stage of play, predictions are simply impossible as evidenced by the fact that the leading group are constantly jockeying for the top spot. Yesterday, Italians Alberto Riva (993 – EdiliziAcrobatica) and Giammarco Sardi (992 – Antistene) were leading the way.

Today Loïc Blin (871 – Technique Voile – Les Entrepreneurs du Golfe) has snatched back the reins, despite a continued fearsome reprisal by Hugo Dhallenne, who’s now up to third place, tickling the foil moustaches of the top duo.

Everything hangs in the balance as we wait to see whether he’ll manage to pull a blinder and slip by them to snatch victory, despite mixed results in the first half of the race.

As we await the response, one thing for sure is that he looks set to take victory in the overall ranking after his second place in the first race some 1h52 behind the German sailor Melwin Fink (920 – SignForCom) who is over 160 miles off the pace today.

If he could secure the win, he would bag a near-perfect score. Where the reverse is true, together with Gilles Chiorri, he could become one of only two sailors in the history of the Mini Transat to take victory in the event without winning any legs.

“It just goes to show that consistency, as is often the case in offshore racing, is one of the keys to performance, just like mental strength”, says the winner of the 1987 edition.

An edition whose racetrack stretched from Concarneau in Brittany to Fort-de-France with a stopover in Tenerife, in which he finished fifth and second in the two legs, aboard an ancient prototype, which had won the event in 1981 in the hands of Jacques Peignon.

“The main point of interest in my Mini Transat relates to my finish in the Canaries. Whilst heading the fleet, I was unable to locate the finish line.

“Angry with the Race Committee, who I reckoned were incapable of setting this famous line correctly, I entered the port where Jean-Luc Garnier, the then event organiser convinced me to get back out there and cross it.

“I set sail with two reefs in the main and three fenders on each side of the boat and finished in fifth place with an 18 or 20-hour lead over Laurent Bourgnon. Laurent took the win in the second leg, but finished behind in the combined time,” recalls Gilles. So yes, indeed, anything is possible in this Mini Transat…