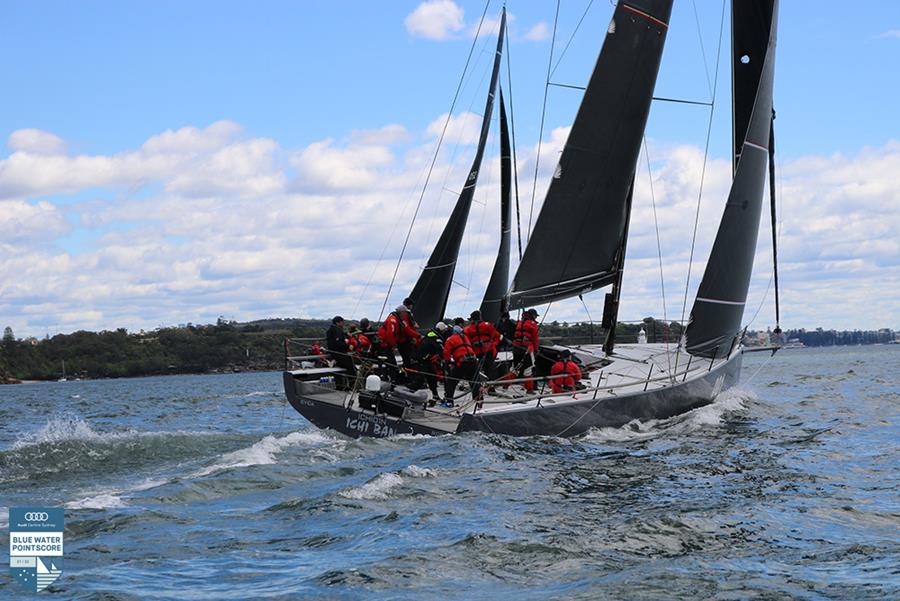 Ichi Ban at the start of the race - Mitch Grima, CYCA pic

A strong west nor’wester laid the platform for the fastest Bird Island Race on record as URM held off Moneypenny to take line honours in an incredible time of 5 hours, 22 minutes and 21 seconds.

Whisper, the line and overall honours winner in the Flinders Islet Race, put in another strong performance to finish third over the line.

Matt Allen was back on top of the podium as his Botin 52 Ichi Ban – the two-time Tattersall Cup winner – claimed IRC and ORCi overall honours.

With a second place finish overall from Flinders Islet and a win from Bird Island, Ichi Ban is in a good position after two of the four races in the Audi Centre Sydney Blue Water Pointscore.

“We got a solid second place last week, so it’s nice to back that up with a win,” Allen said.

“It was a pretty wet and furious race, especially with that much wind. I think we got a gust of 38-39 knots at one stage, so it was pretty much about holding on and trying to keep the salt out of the eyes.

“Luckily it was a short race in terms of time. [the first two races of the Audi Centre Sydney Blue Water Pointscore] have given the fleet upwind racing, downwind racing and quite a lot of furious reaches.

“It’s good for the whole fleet to have that experience and time on the water. It helps with the crew work.

“The Blue Water Pointscore is a really big thing for us. It’s one of the main focuses of the boat – that and the Rolex Sydney Hobart are intertwined.

“To have a second and a first sets us up well, because we know the Pointscore is going to be really tight at the top and it’s hard to get points on the others,” Allen ended.

Hall and co-skipper Jan Scholten won Two-Handed IRC honours in the Flinders Islet Race a week ago and made another statement by winning Two-Handed line honours, IRC and ORCi honours.

“I think we’re feeling comfortable with where we’re at, though there is still quite a lot to do,” Hall said.

“We’ve only had the boat for a year, so we’re still learning, but the miles we put in over the winter are paying off now.

“We have a better idea of how she goes in different conditions and how to set her up for those conditions, which is helpful.”

Disko Trooper was pushed all the way in a thrilling line honours battle.

“We got a bonus second race yesterday,” Hall laughed. “We had the race to Narrabeen, then it went from 25 knots to 2 knots in the space of about half an hour.

“We had a comfortable lead on the second boat, then the next thing we knew, we had Salt Shaker (it finished second overall in the Flinders Islet Race), Rum Rebellion and Local Hero all together behind us.

“The breeze picked up, dropped again, and then filled in, so we took off and it was on for young and old to the finish from there.

“When you’re in a comfortable lead and you’ve held it after bashing through 30-35 knots for nine hours, then it just stops and you’ve got no wind with everyone charging up behind you, it’s not ideal.

“You’ve got to stay calm and make considered decisions in these boats. It’s very easy to not do that, so I was very pleased we snuck out of that.”

A new record was set for the 2021 race, the course shortened by 2 nautical miles with a change to the finish line. But URM’s time, sailing at an average of 16 knots, also smashed the previous record for the 85nm course – the westerly conditions ideal for record breaking.

“Sometimes Mother Nature can be kind,” joked URM owner Anthony Johnston. “It was a competitive race the whole way. Conditions were great and the crew worked really hard.

The boat is in good condition. She’s had a few new sails and we’re focused on getting her ready for Hobart now.

“We’re really happy with how it’s running. We’ve got a great bunch of people, a really good team, and they work really well together.”

Annie Lawrence’s historic Halvorsen 36, Solveig, was the final boat to cross the line on Sydney Harbour, finishing at 0029hrs on Sunday.