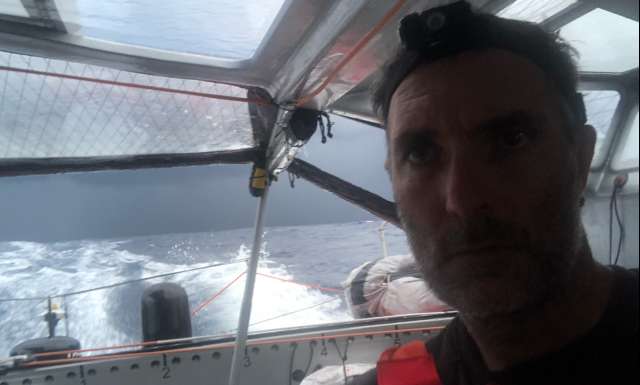 An easy Doldrums? Tell that to Jérémie Beyou and Christopher Pratt on Charal, who have watched their 100-mile lead turn into a 50-mile deficit after less than a day in the dreaded Doldrums. It was heartbreaking for Charal, but the air taken from them has breathed life into the podium race for the IMOCA in the 14thedition of the Transat Jacques Vabre Normandie Le Havre.

“We were 100 miles ahead and we are going lose them all, we have no wind, we can’t get out,” Beyou said in the early hour of the morning, echoing the words of sailors over the centuries after entering the Inter Tropical Convergence Zone. “We were on a good track and we caught a last squall this morning and after that, curtains.”

Eight hours later at the 11:00 UTC ranking, Apivia, had swept past 50 miles to the east of Charal, into a 48-mile lead. In the last 24 hours, Charal, the favourite and the most optimised and practised of the five latest generation foilers in the race, had made just 106 miles. Apivia had made 273. Sometimes Charalappeared to have stalled completely. It has been a stunning bouleversement to match anything in the previous 13 editions.

Beyou and Pratt will certainly have a different view on the confident predictions of Richard Silvani from Metéo France yesterday (Tuesday) and there were big changes throughout the fleet as they contracted. There was sympathy for them through the fleet – We will only know the true order when they emerge back into the trade winds.

Groupe Apicil was less than a third of a mile behind PRB with six boats separated by less than nine miles. That included 11thHour Racing, who chose this morning to take their penalty turn for breaking an engine seal.

Never has a Class40 boat travelled as fast before as Ian Lipinski and Adrien Hardy on Crédit Mutuel. Last night they peaked at 415.86 miles over 24 hours, beating the old record of 377.7 by V and B, set in the last edition of the Transat Jacques Vabre Normandie Le Havre in 2017.

It is no one-off wonder. They have broken the old 24-hour record several times over the last couple of days and have been over 400 all morning in their new David Raison-designed 40-footer launched this year. They have only had a couple of months training, so they are still learning about the new boat, with its most obvious innovation being its pronounced nose. One thing they have learned is that with the correct and well-trimmed set-up they can leave the autopilot to it. They have not touched the helm since Ushant, the morning after the start.

At the 11:00 UTC Crédit Mutuel, now past the Cape Verde islands, was 80 miles ahead of Leytonand 89 miles ahead of Aïna Enfance & Avenir, who have both been regularly touching the old 24-hour record in their Manuard mach 3 boats. All three will have Charal on their minds with the Doldrums looming.

Groupe GCA – Mille et un sourires has passed the equator and is over 200 miles ahead of Solidaires En Peloton – ARSEP with just 800 miles left to the finish in the Bay of All Saints in Salvador de Bahia.