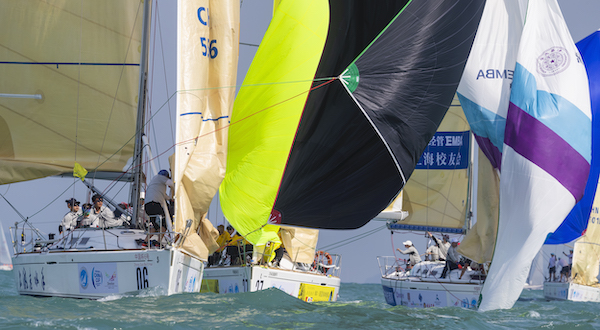 Cheche Team from Spain flipped the switch on day two of the China Cup International Regatta in Shenzhen to dominate racing in the Beneteau 40.7 one-design fleet. Julio Bernardeau Navarro steered his crew to scores of 1,3,1 – by far the most consistent set of results – and has displaced the Uruguayan team Fjord III from the top of the leaderboard.

The previous day had been light and fluky, and Cheche had still scored a respectable 7th place in the lottery conditions. But in the more predictable medium airs of Thursday the Spanish really hit their stride. Navarro commented: “They were much more even conditions today, medium airs, which played to our strengths – good speed, good starting. The most important thing was the starting, followed by the tactics and strategy to make the best of the shifting wind.”

Lying in second place after scores of 3,2,10 is Jono Rankine’s Forever 9. The New Zealander has competed in eight editions of the China Cup, and always finishes in the top five, winning the event on one occasion. Rankine is certainly in the hunt for another victory but foresees a close battle with the top five, all of whom he believes are good enough to win overall. “You’d have to go a long way to find more competitive one-design keelboat racing than what you get in these 40.7s. You get to sail with your mates, it’s a great regatta, it’s hard to beat, to be honest.”

Moving up to third place just one point behind Forever are relative newcomers to the China Cup, a British team skippered by Chris Jackson sailing Doubao. Tied on points with the Brits are the Aussies, Down Under Racing Team, skippered by America’s Cup legend Skip Lissiman.

One notable team missing from the top of the leaderboard is XianLiao, the boat sailed by a young crew of semi-professionals from the Royal New Zealand Yacht Squadron (RNZYS). Unfortunately they followed up a black flag disqualification from day one with another in the first race of Thursday. The Kiwis then made amends with scores of 1,2 in the next two heats, but they sit in 10th overall and any chance of repeating their victory from two years ago looks all but gone.

One place and one point behind the Kiwis is ChinaOne.Ningbo with another notable New Zealander, Olympic medallist Craig Monk, running a young crew of talented and race-hungry Chinese sailors. Monk has key professionals on the boat including Australian match racing star Keith Swinton at the helm. But the aim of the campaign is to blood the young Chinese sailors in the art of sailboat racing at the very highest levels of the sport.

“This week, six out of 10 on board are Chinese, and we’re really excited how things are panning out,” said Monk. “The plan is to integrate these guys into our international team. This is the most Chinese nationals we've had on board with us. We're keeping it realistic, if we were top 5 we'd be really happy. And we’ve shown glimpses of promise, 2nd all the way to the finish of the last race today, then we got rolled by some of the big boats in another division and lost four boats in the 40.7 fleet. These young guys are seeing that they’re getting there. They have the talent and they’re growing the skills to be able to compete at the top level.”

On Friday the regatta will reach the halfway stage, and principal race officer Simon James is satisfied with how things have gone so far. “The first day was tricky with so little breeze, but we’ve made up for it today and the forecast looks like we’ll be able to hit our target of nine races across the week. For tomorrow we'll probably do a longer distance course, going round islands, and mixing it up a bit.”

Teams from 32 countries and regions are competing in racing divisions which include the Beneteau First 40.7, IRC Class, Bavaria One Design Class, J/80 Class, HKPN Class and Youth One Design Class.