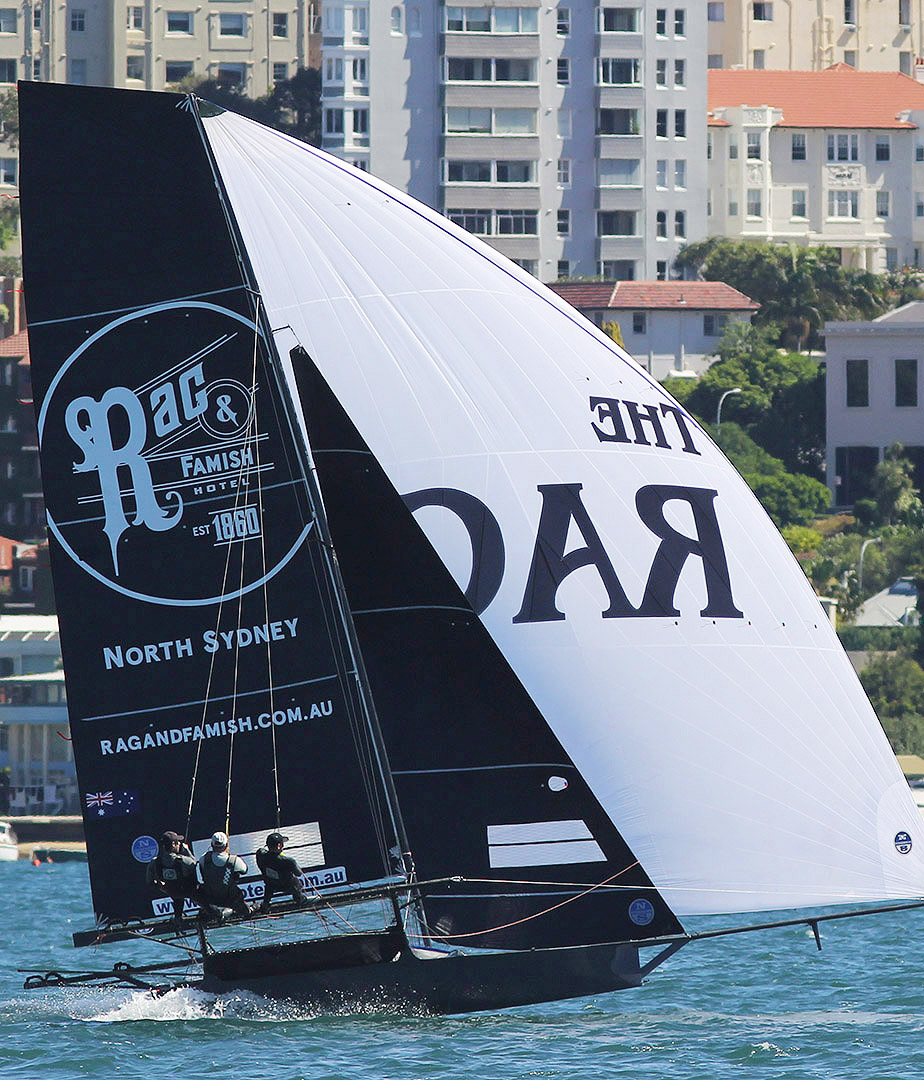 With two runner-up placings, a fifth placing and a seventh placing from the four races sailed so far, Appliancesonline.com.au has a total of 16 points.

Second placed Noakesailing team of Sean Langman, Ed Powys and Nathan Edwards, won the first two races of the championship and finished fifth in last Sunday’s extreme conditions on Sydney Harbour, but a 13th place finish in Race 3 of the Championship has been costly, and leaves the team on 20 points.

The nature of 3-buoys racing and a two-race program on the Harbour on Sunday will test every team in the fleet and placings could change dramatically if the racing is held in either very light or strong winds.

Brett Van Munster is well aware of the battle ahead over the next two weeks but is satisfied with the team’s early season progress to date: “It’s pleasing that we are going well enough to lead the series as we’re ‘weekend warriors’ who are tied down with work commitments and haven’t had time to do any practice.”

“We’re happy with the way the boat is going and just need to sharpen our starts and some team-work as we get more time on the water.”

“This is only our second season together and I am confident we will be performing at a high level as we move towards the JJs on Sydney Harbour next March.”

Brett Van Munster (Van Munster Boatbuilders) is also in a unique position as the class builder of all 18ft Skiff hulls.

Since 2006, he has not only produced the boats for everyone in the fleet, but also had the task of making repairs to hulls, during the week between races, if one of his competitors had an unfortunate mishap on the racetrack.

The quality of the hulls produced by Van Munster Boatbuilders has been a great boost to 18ft Skiff Racing generally, as well as to the Australian 18 Footers League, in particular.

Van Munster’s outstanding construction ability and techniques, along with the expertise of the League’s Stephen Quigley, has dramatically changed the quality and longevity of the high-performance hulls.

A new hull was once critical to success in the major championships. Now, the latest hulls are so well constructed that the longevity of a championship-winning hull has been increased to around 5-6 seasons.

Brett Van Munster says: “Our challenge is to build boats which are very light yet strong enough to meet the high demands of 18ft Skiff Racing. We only have a small team but we’ve got the expertise to work with the same materials as those used in Formula One Racing and the aircraft industry.”

Brett is known as someone who drives his skiff hard off the wind. Guess it’s not surprising as he knows the strength and reliability of the product.

With Races 5 & 6 of the 2019-2020 Spring Championship to be sailed on Sunday over windward-leeward courses on Sydney Harbour, club officials are hopeful of good racing conditions as the points scored in the two races will be vital before the final race of the championship on November 17.

Spectators can see all the teams in the rigging area before Sunday’s racing, then follow all the action from on board the spectator ferry, which leaves Double Bay Wharf, alongside the rigging area, every race day at 2pm.

The livestream video team will also be out on Sydney Harbour to capture Sunday’s racing action for those who can’t make it onto the water. Live streaming is available by going to www.18footers.com and clicking on the ’18 Footers TV’ link.

As well as watching the livestreaming coverage, you can also follow all the club’s racing throughout the entire 2019-2020 Racing season.