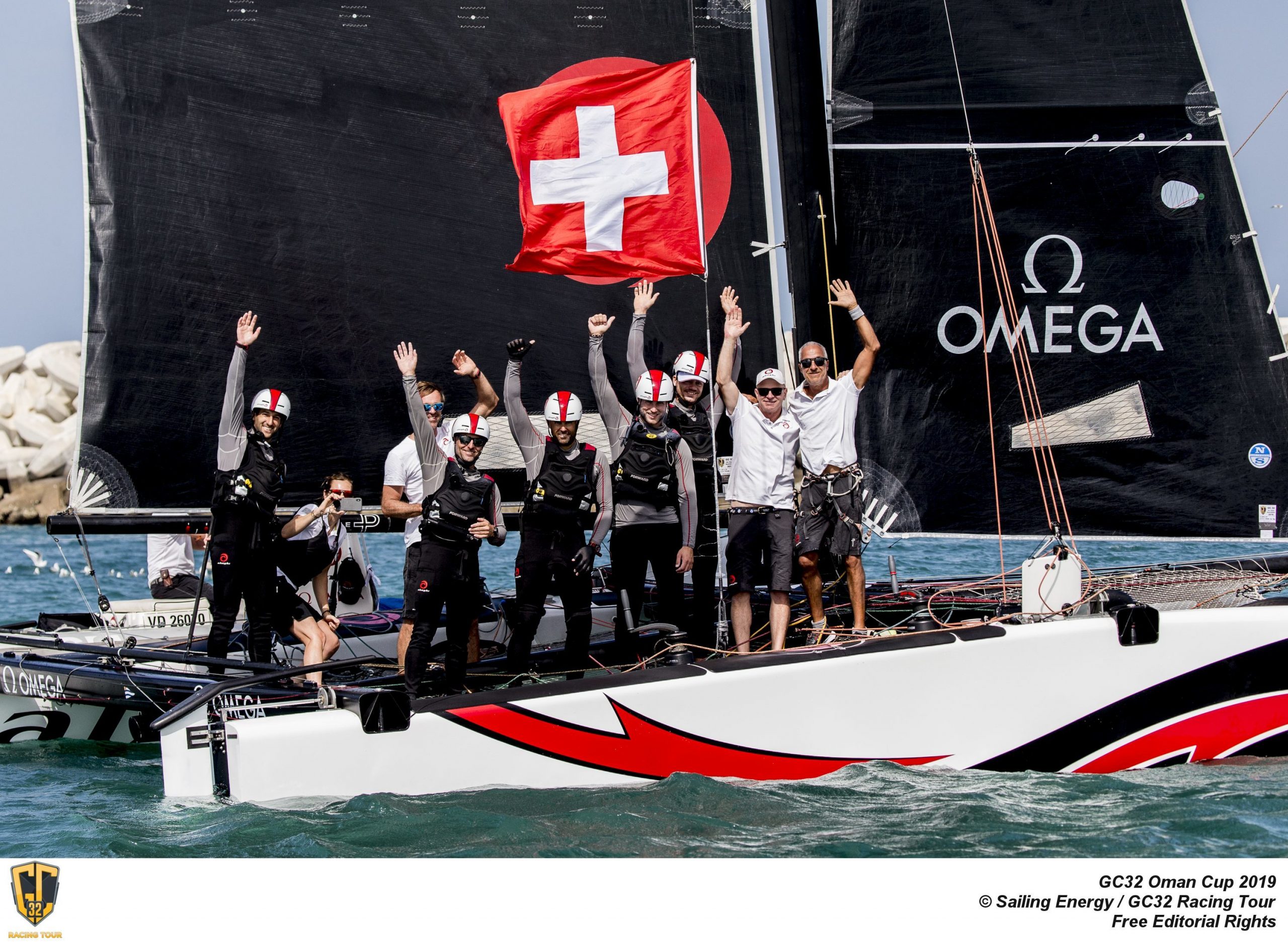 We are the champions - Sailing Energy pic

In yet another flawless display by the world’s top catamaran sailing team, Alinghi today won the GC32 Oman Cup and the 2019 GC32 Racing Tour. This Ernesto Bertarelli’s Swiss team adds to their GC32 World Championship title and victory in their own domestic D35 catamaran circuit.

Ultimately, Alinghi never missed a beat, leading from the outset, although surprisingly her main competition here was Erik Maris’ Zoulou.

The final day of the GC32 Oman Cup was strange. With big winds (and seas) forecast, PRO Stuart Childerley brought forward the start time from 1300 to 1000 but at 1000 conditions were light and racing only began at 1100.

Sadly, coming up the first beat in the first race, Adam Minoprio misjudged ducking Zoulou and his boat’s port bow impaled itself in Zoulou’s port topside. It took some minutes and a gybe before the two boats unlocked.

Zoulou just stayed afloat long enough to get back into the Al Mouj Marina and be craned out.

Meanwhile, Minoprio’s team missed one race but was back on the water for today’s third. Bouncing back, they won this, then with the wind and sea state rapidly building, the day’s final two races were cancelled and everyone was sent ashore. In fact after today’s second race Alinghi had already won.

“I am really happy to end the season like this – it is very nice to win,” said Alinghi’s helmsman Arnaud Psarofaghis. “We have had a great battle with Oman Air all year and the mid-field was improving too. We tried to keep ahead of everyone, but they are all very intelligence and caught up quickly. It is going to be a really interesting season next year.”

Alinghi Team Director Pierre-Yves Jorand added: “We managed to achieve our goals this year. This wasn’t down to luck, but because we have a fantastic sailing team and an amazing shore team which, after a collision, managed to get us back sailing the next day.

“It is a team effort plus we also have huge support in Switzerland, most of all from Ernesto [Bertarelli] who has supported us for many years. We enjoy working together, fighting and achieving new goals.”

One key to Alinghi’s success is their experience together, the core crew having raced multihulls for more than two decades although some younger sailors have since joined like Psarofaghis, tactician Nicolas Charbonnier, Bryan Mettraux and Timothé Lapauw. “The old guys with wisdom and the youth bringing energy and strength – that mix works really nicely,” concludes Jorand.

Minoprio was suitably apologetic to Erik Maris and the Zoulou crew. “I went to go behind them and we were just too close and it ruined their day and ours. It was silly – there was never enough space.

“I should never have even considered it. This week the rub of the green hasn’t gone go our way. As per usual Alinghi sailed faultlessly; her crew is the benchmark and deserved to win. Congratulations to them.”

Nonetheless Oman Air finished the 2019 GC32 Racing Tour in second overall and Minoprio hopes to return to do better in 2020. “It is the best circuit out there. The boats are extremely fast and very enjoyable to race on as a team.”

Zoulou’s Erik Maris came ashore philosophical but intact even though the impact was immediate below where he was sitting. He has sailed many different high performance yachts and race cars over the years and incidents, although rare, are inevitable in high performance sport. “Even Adam makes mistakes, so next time I make one we’ll be even!”

Zoulou was awarded average points for today’s races leaving them second overall 9.1 points astern of Alinghi and 7.9 ahead Red Bull Sailing Team. There is some consolation in Zoulou winning the top prize in the 2019 GC32 Racing Tour owner-driver championship.

Finishing third secured Austrians Roman Hagara and Hans-Peter Steinacher’s Red Bull Sailing Team the final spot on the season’s podium. “We made progress through this year which was good after we began with a new team and were initially struggling around the course,” said Hagara. “But we’ve been catching up Alinghi and Oman Air.”

GC32 Racing Tour newbies, Black Star Sailing Team finished fifth in Oman but Christian Zuerrer was pleased with their results. In 2020 he hopes to keep the same crew as here with Kiwi match racer Chris Steele helming. “We’ve made big improvements because we are now racing with the other and not just trailing behind them.”

GC32 Racing Tour Manager Christian Scherrer commented: “I would like to thank all of the teams who have participated in the GC32 Racing Tour 2019, our Tour team and all our partners and venues. We look forward to a successful 2020 season with both new and familiar teams and venues which we’ll be announcing shortly.”