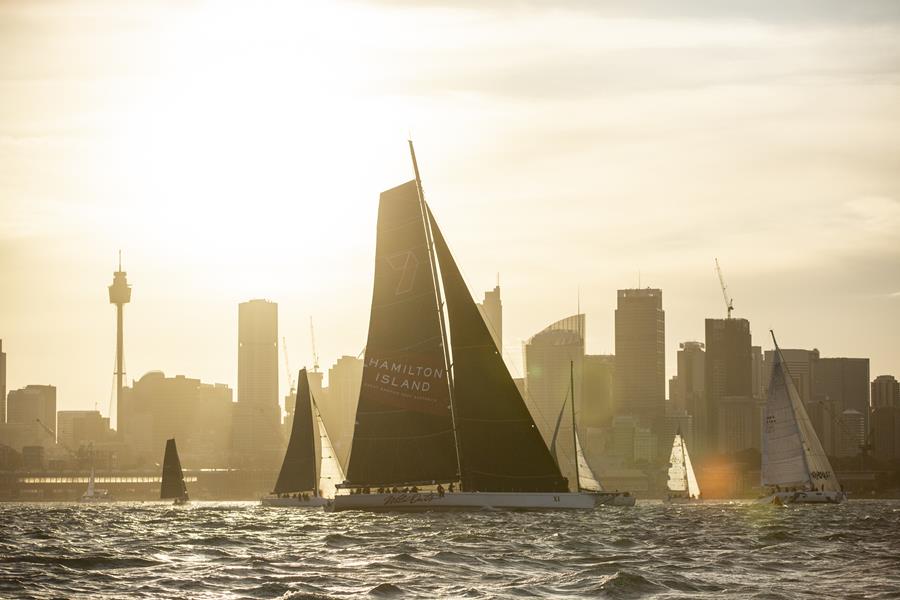 Wild Oats XI is the race record holder and will battle with two other super maxis in the Cabbage Tree Island Race. Credit - CYCA.

The Cabbage Tree Island Race is expected to have its largest fleet in history when the 67 yachts take to the start line for the fourth race of the CYCA's Blue Water Pointscore on Sydney Harbour this Friday night.

The historic 75th Sydney Hobart Yacht Race has had a significant influence on the Cruising Yacht Club of Australia’s most popular ocean racing series, the Blue Water Pointscore, attracting a large portion of the 170 yachts entered in the momentous 2019 Rolex Sydney Hobart.

A strong westerly wind is expected to arrive on Sydney Harbour in time for the start, making for a fast reach to Cabbage Tree Island off Port Stephens on the NSW mid-north coast, and back. The huge fleet and exciting conditions ensure that there will be tight contests within all divisions in IRC, ORCi and PHS.

This will be the first race since last year’s Rolex Sydney Hobart for the three 100-foot super maxis that are entered in the race, including the Oatley family’s Wild Oats XI, who currently hold the record for the 180nm race of 12 hours, 15 minutes, 55 seconds. Peter Harburg’s Black Jack, and Christian Beck’s InfoTrack are the two other super maxis in contention for line-honours victory this weekend, and they all want to take their first win of the season.

Four of the current top five on IRC in the Blue Water Pointscore are TP52s, which are known for their competitive offshore design. Seven TP52s are entered in the race as well as four Sydney 38s making for exciting divisional battles among the fleet.