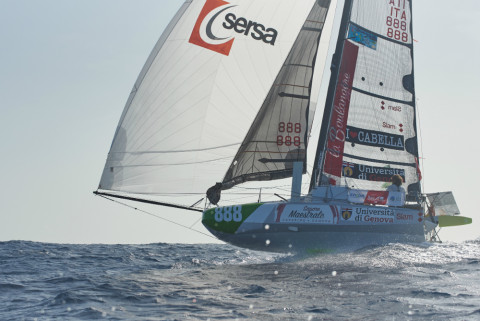 Italians Matteo Sericano and Marco Buonanni have both broken a rudder and are making for Mindelo, in Cape Verde, where they’ll make a pit stop to effect repairs before, hopefully, returning to the racetrack. Since the start in Las Palmas de Gran Canaria, three other competitors have made pit stops before setting sail again: Amélie Grassi, Marie Gendron and Jean Lorre.

The remaining 77 sailors competing in the second leg of this Mini-Transat La Boulangère have surely had their share of hassles too, but have seemingly been able to deal with them offshore.

To support one another in the great adventure that is the Mini-Transat, some sailors are making for Martinique in groups. Naturally, this is not the case for the front runners, who are focused on leaving their playmates as far behind them as is humanly possible. This evening, François Jambou (prototype) and Ambrogio Beccaria (production boat) are stretching out their respective leads.

The trajectories adopted by Matteo Sericano (888) and Marco Buonanni (769) on the cartography for the Mini-Transat La Boulangère suggested that the two Italian sailors have a few issues. Fortunately, they quickly got a message to Race Management saying: “Technical problem, I'm OK.”

Two support boats headed in their direction to find out more and learnt that each of them has broken a rudder. Unable to effect repairs at sea, they’re diverting to Mindelo, in the Cape Verde islands, to get their Minis back up and running. At 16:00 UTC, Matteo was about 200 miles from this port, and Marco around 350 miles away.

It’s interesting to note that a number of the mid-fleet sailors are taking on the long passage across the Atlantic in contact with fellow sailors. In this way, they’re able to chat over the VHF and doubtless dispense and receive reassurance. Eight sailors are particularly bunched together on a N’ly course: Mathieu Gobet (455), Jean Bachèlerie (428), Thomas Gaschignard (539), Thomas D’Estais (819), Thibault Blanchet (774), Simon Tranvouez (807), Pierre Casenave-Péré (857) and Matthieu Perrault (825). Further South is another group made up of Jean-René Guilloux (915), Thibault Raymakers (891), Olivier Le Fichous (721), Axelle Pillain (781), Albert Lagneaux (882), Christophe Brière (755) and Raphaël Lutard (900).

“This situation where sailors make headway as a group is a frequent occurrence mid-fleet in the Mini-Transat. However, the practice is less evident up front,” explains Denis Hugues, Race Director.

Prototypes: François on the last lap?

François Jambou (865) is letting his prototype go into overdrive, constantly racking up high speeds as a result. His rivals have their work cut out trying to keep up with the hellish pace he’s setting. Indeed, it’s worth noting how second placed Tanguy Bouroullec (969) has slowed today. Does Tanguy have techical issues? In any case, third placed Axel Tréhin is making the most of the opportunity to swoop in on his prey. After a complicated and backbreaking first leg due to energy woes, Antoine Perrin (850) is sailing a blinder in this leg and is lying in 5th position this evening, in contact with the experienced Erwan Le Méné (800).

The three competitors who secured a podium spot in the first leg are opting for very different courses in the second. Matthieu Vincent (947) is the furthest North of the fleet and Félix de Navacelle (916) is the furthest South. Between these two sailors, the lateral separation has stretched to 450 miles this evening! As for the leader Ambrogio Beccaria (943), he’s gone for a passage through the middle where he’s really excelling himself. Astern, those who were favouring a S’ly course at the start of the race have repositioned themselves behind him, as is the case for Florian Quenot and Nicolas D’Estais, who have been the fastest sailors in the production fleet over 24 hours, respectively posting distances of 291.47 and 290.03 miles over a day.

Accessing the Mini-Transat from… Russia

The Mini-Transat La Boulangère 2019 is very happy to boast not one but two Russian entries this year, one man Fedor Druzhinin (prototype 759 – Assist) currently in 19th place in his category this Wednesday on a N’ly option, and the first ever Russian woman to compete in the race, Irina Gracheva (production boat 579 – Irina Gracheva Racing) – currently 47th on a S’ly option. Both sailors are nearly a third of the way across the Atlantic and prior to the start the two compatriots gave us the low-down on their respective journeys to the start line of this epic race.

“Racing in the Mini class is all about constantly overcoming obstacles. From preparing for a race, to training to actually getting out on the racetrack, it feels like you’re climbing a mountain and at times the summit seems to be getting further and further away. The effort involved is constant, whether you’re hunting for sponsors, repairing gear or trying to get time out on the water. Everything is tough-going, nothing is simple. There are no easy solutions in this game and no ready-made answers, and as everyone with a boat knows, they are money pits!” says Druzhinin smiling. However, this race has been something he’s dreamt of doing for the past 20 years.

So what’s the big attraction of a Mini campaign? “Sailing is my life and my job – I’m a sailing instructor and I’ve crossed the Atlantic 5 times. I’ve covered over 100,000 sea miles in the past 10 years or so, 20,000 of which have been singlehanded. If you want to raise your game, improve your boat handling skills and your physical and mental agility, this Mini Transat is the best there is on the offshore racing circuit and it requires you to be mentally and physically strong. Last year, in Les Sables d’Olonne – Azores – Les Sables d’Olonne race, there were a lot of retirements and I really had to push myself to the limit to continue racing after falling badly and cracking my rib. Crawling around a 6.50m boat in huge waves trying to repair a headsail is no picnic I can tell you, but it certainly gives you a psychological advantage once you know you can overcome such hurdles!” he enthuses.

“I still live in Russia which made it very complicated to prepare my Mini-Transat project. I’ve had to spend an awful lot of time travelling on planes and trains, whilst keeping my company ticking along. Before this race, I had to sacrifice precious time with my family to move to Lorient in Brittany for training and to gain experience competing in the pre-season races and that’s really tough.”

One of his main goals in this race is to try to get the best out of his boat in a strong breeze and with sustained trade winds forecast right the way to the finish, he’ll certainly be an even better sailor by the time he gets to Martinique.

Compatriot Irina Gracheva also boasts a wealth of sailing experience, predominantly spanning Baltic waters, though it also stretches to an expedition to Cape Horn in 2015 as well as a double-handed transatlantic passage. The Mini-Transat seemed like the obvious choice once she’d set her heart on singlehanded sailing.

“Accessing the Mini-Transat is no mean feat for anyone, but when you come from the other side of Europe or further afield, it’s very daunting. I too still live in Russia, but to prepare and qualify for the Mini-Transat the only solution, for now at least, was for me to move to France, La Rochelle in my case, which I did for six months. On top of preparing for the race, I had to get used to living in France with all their new customs and habits that are a far cry from those in my home country, but I’m very proud to be the first Russian woman to attempt this race.”

Wherever in the world you’re from, the common denominator in any Mini-Transat campaign is a deep-seated passion for sailing. Once you have that, it would seem that anything is possible. “My love for the sea and sailing developed from the age of twelve, when I began sailing competitively in Saint Petersburg and gradually began to devote all my time to this new passion. Singlehanded sailing appeals to me because aside from the romanticism of it, you grow as a person every time you overcome what might seem like an impossible hurdle and I love the physicality of working with your hands and also using your intellect to find solutions and fixes. Discovering what you’re capable of on your own is just amazing!”

Among the main events that colour her history in sailing are the Rolex Fastnet, the Middle Sea Race, the  RORC Caribbean 600, a sailing expedition to Cape Horn and a world speed record for a transatlantic passage from Bermuda to Plymouth, paired up with Swedish sailor Mikael Ryking on a Class 40, back in 2017, a year that also saw her secure a national award in Russia as Sailor of the Year. It’ll certainly be intriguing viewing to see how Irina fares in this Mini-Transat 2019 and whether it will serve as a springboard to further oceanic adventures…

Ranking on Wednesday 6 November at 16:00 UTC