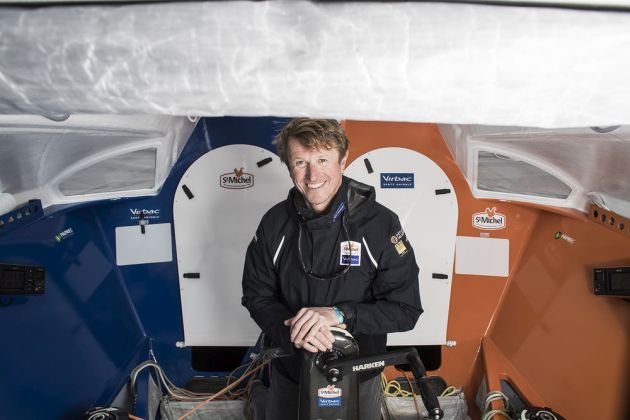 At 14.30pm on Monday 2nd May, the late Eric Tabarly’s wife, Jacqueline Tabarly, will fire the start gun from aboard Navy frigate HMS Kent and send 25 of the world’s best and bravest ocean racers on their solo passage, 3050nm across the North Atlantic to ‘The New World’ – Brooklyn, New York City.

The first boats will begin docking out ahead of the race at 11.00am, the Class40s from Sutton Harbour and the multihulls from Plymouth Yacht Haven.

The majority of the IMOCA 60 class will leave the harbour in the early hours of the morning to ensure they are not restricted by the tides and lock. The final boat to leave the harbour will be IMOCA 60 PRB, skipper Vincent Riou opting for a 13.30pm dock out, just one hour ahead of the start.

Twenty-four competitive entries, plus Loick Peyron sailing Pen Duick II, will start the race all together outside of Plymouth breakwater.

The weather for the start looks moderate, the fleet just managing to miss a cold front moving towards Plymouth and bringing with it rain and strong winds as The Transat bakerly Race Director Gilles Chiorri explained.

“We’re looking good in terms of the weather tomorrow,” he revealed. “We’re expecting 10 to 15 knots from the south west, then swinging round to the west just ahead of the start – we may even have some sun.”

“The moderate conditions mean that all 25 boats can start the passage together. The 1nm start line will be split between monohulls and multihulls.”

The first night of racing is looking relatively straight forward for the skippers after rounding Eddystone Lighthouse, giving them time to adjust and find their pace before they get stuck into proper Atlantic sailing.

For the leading boats, that moment will come quickly – just 36 hours into the race as Chiorri explained.

“The routing is showing a northerly course past Ireland towards the North Atlantic. Going this way will be fast, furious and wet. By Tuesday evening, the first boats will already be experiencing some quite harsh conditions with strong winds, big seas and gusts of up to 45 knots – this will be a real test for the Ultimes.”

Although the routing points north, there is also the option of a slower, but milder course. As they enter the western Channel, the skippers will have a decision to make – go north and push the boat hard and fast through heavy conditions very early on. Or go the long way round, preserving the boat and their energy and reducing the risk of damage.

“It will be interesting to see which boats take which route,” the Race Director continued. “This decision won’t just be based on the ability of the boats to take on bigger conditions, but also the way the sailors are approaching the race – the skippers need to find the limit of their machine.”

The decision made here will tell us how the sailors have prepared for the race, some going hard and fast and others setting their navigation to avoid top wind speeds and rough sea states – separating the tortoises and the hares.

The night before the race in Plymouth, there is a thick fog hanging over the harbour and apprehension in the air as the skippers ready their minds for the race and concentrate on what they are about to face.

Even for the world’s best ocean racers, the 3,050nm upwind slog through gruelling Atlantic conditions will be an ongoing battle against the elements, their own physical and mental limits and each other – they don’t call The Transat the toughest transatlantic race for nothing!