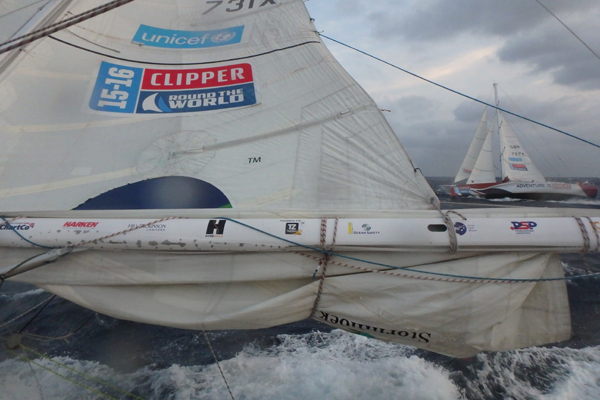 The PSP Logistics Panama Cup got underway in the early hours of this morning, with the teams reinvigorated after a successful stopover in Seattle and filled with renewed enthusiasm for this tenth race of the global series.

“All went smoothly and it was a clean start on the first attempt. Wind was about 15 knots from the west. All boats that started are currently under white sails making good course for Panama,” he reported.

Race start was delayed by four hours in order to give ClipperTelemed+ time to make repairs to its mast track. The repair work took longer than anticipated and Skipper Matt Mitchell and his crew began racing at 10:50 UTC and are in persuit of the rest of the fleet.

In his 0600 daily report, Skipper Matt explains: “A piece of mainsail track came off the mast last night and we have been all day fixing it. Circumnavigating crew member Sean Lee did a great job earlier, however the large sea state we were experiencing towards the start area meant working up the mast was impossible. I decided to head inshore to find some flat water in order to make working aloft safer and easier. We hope to be back underway in the near future.”

After almost seven hours of racing, less than four nautical miles lies between early leader Derry~Londonderry~Doire and the rest of the fleet that has commenced racing. At the last polling time of 0900 UTC, most of the teams were travelling between 10-12 knots.

Having had its first taste of success with a podium finish in Race 9 across the Pacific Ocean, Unicef Skipper Martin Clough says his team is fired up.

“The good ship Unicef had potentially her first uneventful start of the entire race. We were one of the first to get our sails up and start moving after the Le Mans start and we are currently sailing well under our Yankee 1 and making great progress towards the front of the fleet. A great start to what we hope will be another great race for us.”

Currently in seventh place, GREAT Britain Skipper Peter Thornton reports on the tight race so far: “Conditions were sloppy to start with but pretty much a fleet-wide headsail change shortly afterwards gave a bit more drive.The fleet is jostling for positions right now with some slightly gusty conditions.”

Giving a glimpse of what the fleet can expect over the coming days, Clipper Race Meteorologist Simon Rowell forecasts: “This north-west flow should continue for the next 48 hours or so, driven off the eastern side of the East Pacific High, and then the incoming front should shake things up a bit. It doesn’t look a particularly strong front, and the secondary developing on it should be well north of the fleet.

“However, the wind shift ahead and through the front will probably be pretty quick, and the teams could experience some nasty individual squall clouds which will give some short-lived but strong gusts. After it goes through the East Pacific High should take over again – happy days!”

After taking the Invest Africa team around the world in the 2013-14 edition of the race, Rich Gould has returned to skipper IchorCoal for the remainder of the race to London.

On his first day back racing, Skipper Rich says: “We are now pushing south, the sun has not long set and we are going well. It would seem that many of the fleet have changed up from the Yankee 2 to the Yankee 1, whilst we are hanging on to the Yankee 2. With the breeze we currently have IchorCoal is holding her own, charging along at 10 knots. The crew are now settling in to the watch system, the sound of trimming from the deck is a reminder that they are keen to get to the sunshine that awaits us further along the course.”

With almost 3800 nautical miles to go to Panama, there is all to race for in the PSP Logistics Panama Cup. Stay tuned to the Race Viewer to keep track of all the action.