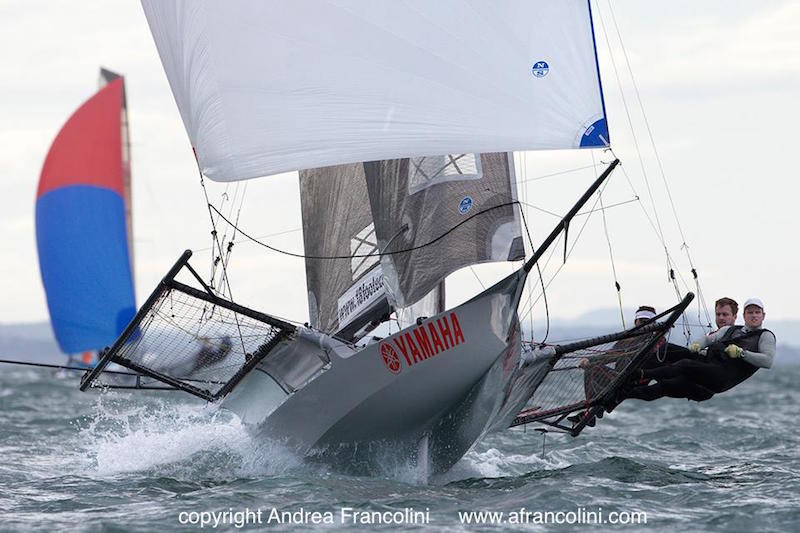 Over the long weekend, 14 18 foot skiffs were racing in Auckland for the Maersk Line 18’ Skiff ANZAC Championship. New Zealand team Yamaha; Dave McDiarmid, Matt Stevens and Brad Collins, lead from start to finish to take out round two of the Triple Crown Trophy and now it all comes down to the Mark Foy trophy in Fiji in June.

“Bloody good to come away with the win after finishing second at the JJs. We are pretty stoked!” said skipper McDiarmid to the regatta media.

The battle is now on between the Aussies and Kiwis for the final round of the Triple Crown Trophy; the Mark Foy Championship, hosted by Denarau Yacht Club from June 26 to July 1.

This time there will be no hometown advantage for the sailors and the Aussies have a score to settle. The last time the 18 Footers raced in Fiji was in 1952; and the Kiwis won.

With a fleet of 20 boats expected, it will be one of the biggest fleets outside of the JJ Giltinan and three countries will be represented – Australia, New Zealand and USA. This is one event you won’t want to miss – the regatta will be run at the same time at the South Pacific Foil Kite Championship and on the Thursday the two fleets will come together for the Speed Spectacular – a downwind speed race open to all.

For those that will be in Fiji at the end of June, there will be a big spectator boat each day with a bar, food and band on board. Each night will be a social function including a fish night, a pig on the spit and entertainment.

To keep up to date on all the action head to the Fiji Fizz Festival Facebook page. You can get involved with the Pick the Podium just head to www.18footers.com for more details.