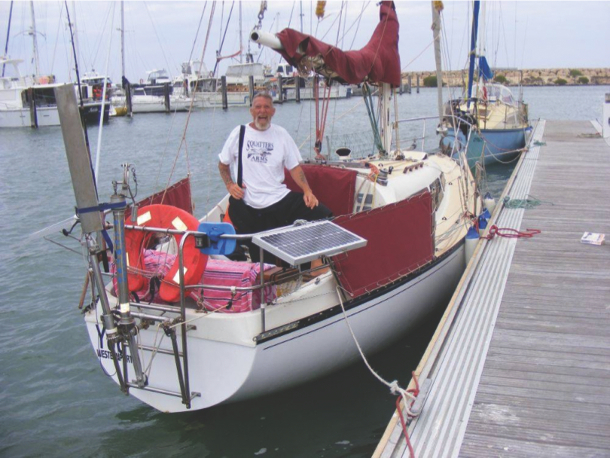 How does circumnavigating Australia in a Top Hat sound? How about doing it singlehanded?

Robert Lovelace was nominated by a reader and, after contacting Lovelace to congratulate him he sent CH the following story of that remarkable cruise.

Well it did not start off as a circumnavigation of Australia, that is for sure.

I had been sailing for about two years in Westernport Bay (Victoria) and, after a shake down cruise to Tasmania on my Christmas break, I decided to quit work and sail up the east coast for winter and back south for summer. The idea being to find casual work to pay for another east coast cruise.

I figured if I did this for a few years I would know how to sail well enough to try for Lord Howe Island.

Well best laid plans of mice and men often go awry. After a squall near Gabo, I was well-shaken and seeking reassurance when I entered Twofold Bay. I met up with Luke and Janet Toonen in Cynecia who also had Fleming vanes and l asked him if he had any trouble, which he said he had not. Did not even reef down in the squall, he claimed.

Another bloke I met said do not be in a rush to get up to the Whitsundays, he claimed NSW had some of the best cruising grounds in Australia and he was right.

So when Luke and his friend left Eden, I followed along behind trying to keep up and not being able to get my vane gear to work properly. My tiller pilot blew up and l spent all day on the tiller in what I thought were huge seas. I had a hell of a time trying to enter Jervis Bay and slept like a dog for a couple of days. I phoned Raymarine and arranged for a new tiller pilot to be picked up in Batemans Bay.

From there on things started to get better, I was learning sail balance was the key to self steer and was getting a lot of help from the Top Hat yacht forum online.

The NSW coast proved to be a excellent place to cruise with easy hops and plenty of safe anchorages. Although bar crossings did raise a sweat for the first few attempts, they eventually became second nature.

I sailed in company with Cynecia all the way to Brampton Island where we parted and Luke retuned to Tin Can Bay to leave his boat for the cyclone season. I sailed on to the Whitsundays and enjoyed a few weeks meeting fellow cruisers and getting out to Hook Reef before I returned to Bundaberg to lay Sundowner up for the cyclone season. I returned to Victoria to work for a few months and get the cruising kitty back in shape.

I made Lizard Island my desktop wallpaper and would waste time looking at this, planning it as my final east coast destination before running south, but this was not to be.

I returned to Sundowner the following year and after my bottom paint was on and the sand flies had had their fill of me, l pushed onward. Stopping briefly again at the Whitsunday group before heading up to Townsville, I met up with Luke and Janet again. We sailed in company to Cairns in strong SE trade winds.

Lizard Island was hit by Cyclone Nathan (I think) and was apparently a mess. If I was to turn back this was to be the place, but the trade winds made no indication of easing. I was due back in Victoria around November for work so I e-mailed my boss and explained I would be delayed as I would have to beat into the wind, unless I turned left and went the long way. The reply came back saying “never be in a hurry to get to work, turn left and enjoy.”

It had always been Luke Toonens dream to circumnavigate Australia, as for me I just want to wake up each day on my boat and go sailing. I had no idea of the scale of the journey until I had finished and looked at a wall map.

Going across the top was something every sailor should do at least once in their lives with so many places to see, only accessible by boat or helicopter.

As for the west coast, it is something I hope not to do again. Head winds all the way from north west cape and if you are lucky enough for a northerly, they only blow at about five knots.

If you have an idea for a nomination please contact Phillip Ross (see page five for details) and include as much detail, contact information and images to get the person or crew on the list.

The winner will be announced at the Yachting Australia sailing awards night after being chosen
by a selection panel.