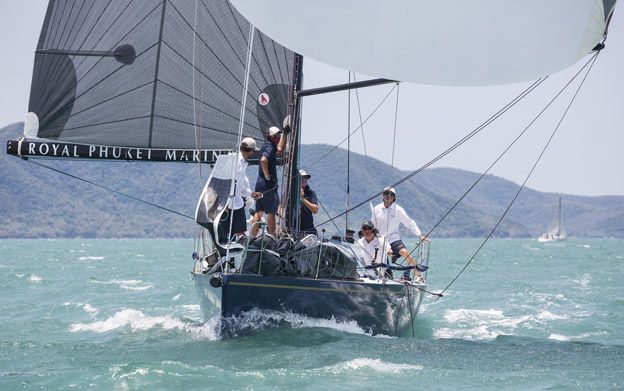 Jessandra II on their way to two wins in IRC 2 today. Photo by Guy Nowell/ Top of the Gulf Regatta.

PATTAYA, Thailand – It was more of the same on Day 3 of the Top of the Gulf Regatta with consistent winds and glorious sunshine. On the Optimist, dinghy and windsurf courses it was the last day of their respective series adding both pressure and excitement to the proceedings, while for the keelboat and multihull classes it was only the second day of their four-day series.

Despite a problem with his backstay forcing him to retire from yesterday's second race, Kevin Whitcraft and team on THA72 were back on the startline today aiming to get back on the top of the podium, and they didn't disappoint. Two bullets today sees THA72 take a one point lead at the series half-way point but with just 35 seconds separating THA72 and Millenium Racing (AUS) in the final race there is still plenty to play for.

Jessandra II (THA) continued where they left off yesterday in IRC 2 with two more wins today and while Fujin (AUS) scored 2,2 Loco (USA) is improving race by race and could be a threat as the series progresses.

There appears to be a script in IRC 3 and all are following it. Amanda (THA) scored two more wins today making it four from four with Nautical Wheeler (UK) and SailQuest Hi Jinks (THA) slotting into their second and third place positions respectively.

In Cruising, the all-Thai crew on Le Vent remain top of the standings after another bullet today and now sit two points ahead of Sein Samathi 1.

Three fast and furious windward/leewards piled the pressure on the 13-strong Platu fleet and battles are emerging at the top, middle and bottom of the class. At the top are two Australian skippers, Scott Duncanson on Kingdom Property and Chris Way on Easy Tiger IV, who are trading blows and despite a sixth place in the final race of the day, Kingdom Property hold onto the top spot by a point from Easy Tiger IV. The Russian team on Wikki are currently in third holding off the Royal Thai Navy team led by Wiwat Poonpat. With two more days and four races expected, lots can still happen.

It was even-steven at the end of Day 1 for the Ocean Multihulls with the 28-foot trimaran, Cedar Swan (THA), and the 42-foot Sonic (THA) sharing the spoils. Heading into the second day it appeared that the longer the race the more chance Cedar Swan had of correcting out their handicap. Sadly for Cedar Swan, two relatively short races today meant two wins for Sonic who now sits two points clear in the series.

It wasn't a flawless performance from Thai Olympian Keerati Bualong but placing in the top four throughout, and a discard when double-yellow-flagged, meant he retained his crown with Apiwat Sringham (THA) in second and Asri Bin Azman (MAS) in third.

The Laser 4.7 competition (Class 9b) went down the wire with the winner being decided in the final race. A bullet in that final race for Asmawi Bin Azman (MAS) secured him the overall win while Suchatree Detthotsapol (THA) had to settle for second. Kamonchanok Klaharn placed third.

The pairing of Navee Thamsoontorn and Kittiporn Kumjorn put in a stella performance on the final day of racing in Class 10 – three first places, plus discarding their first race discard (when they never made the start on time), sees them overall class winners.

The A Fleet in the Optimist Class completed 10 races over three days with five of those being on the final day, and it was the final day that decided the winner. Early leader Thai girl Chanokchon Wangsuk was overtaken by Hong Kong youngster Duncan Gregor who raised to the top on Day 2. The final three races, however,. hurt Duncan whose 9,21,9 scoreline opened the door for the winner of Hua Hin Regatta last week, and now Thailand Optimist National Champion, Chanokchon Wangsuk. Third place in the A Fleet was secured by Saranwong Poonpat. The top four Thai finishers will now go on to represent Thailand at the Optimist Worlds in Portugal.

In Fleet B, after nine races, the honours went to Peeravit Praphaipong with Jasmine Soo and Krit Alexander Romanyk in second and third respectively.

Today was also the final day of racing today for the RS:One windsurfers who were competing in the RS:One Asian Championship. Nine races over three days in good breeze (and a storm on Day 1) has taken it's toll on many. At the end of Day 2 it was a three-way battle for the Men's Division and despite a late charge from Yancy Kaibigan (PHI) with a 1,2 in the final two races of the series, it wasn't enough and he had to settle for third behind Leung Pui Hei (HKG), which means the winner and 2016 RS:One Men's Asian Champion is I Nyoman Suartana (INA) who has lead from Day 1 and held off all challengers.

In the Women's Division it was an all-Thai podium. Despite valiant efforts from all, nobody could supplant Rio-bound Siripon Kaewduangngam who is the 2016 RS:One Women's Asian Champion having held off fast finishing Sarocha Prumprai (THA) in second with Krongkaew Sakulfaeng (THA) in third.