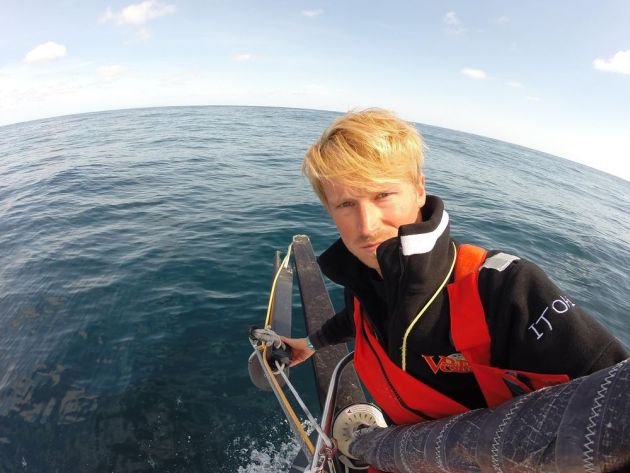 A French yachtsman competing in The Transat bakerly solo transatlantic race from Plymouth to New York, was forced to abandon the race today after his boat crashed into a container ship.

Maxime Sorel on board the yacht VandB was among the leaders in the 10-strong Class40 fleet, as the boats raced downwind in the northern Bay of Biscay about 90 nautical miles west of Lorient, when he reported a collision. The boat suffered damage to its bowsprit, forcing Sorel to head to the French port La Trinite sur Mer in Brittany. Sorel is safe and uninjured and the boat’s mast is stable but he is very disappointed to have to retire.

The collision happened in broad daylight and good visibility this morning, in an area of busy commercial shipping off the Brittany coast.

Sorel said he was keeping watch as VandB sailed under spinnaker but he did not see the cargo ship. “I was not sailing particularly fast and I tried to avoid it but it was too late,” said the French skipper as he limped toward the coast.

He said he had two options when he realised a collision was inevitable. Either hit the ship lengthways which risked bringing VandB’s mast down or hit the ship at an angle, helping to confine the damage to the bowsprit. “I’m stressed seeing all these freighters around me,” he added. “I have this image in my head and when I see one, I get stressed about it.”

Sorel is hoping to reach port tomorrow morning. Reflecting on the cruel hand that fate played, he commented: “I’m disappointed. You (the organisers) called me this morning to tell me that I was leading the Class40s and now you call to talk to me about why I am giving up. It’s disappointing to have to retire like this.”

Elsewhere in the Class40 fleet, the sole British entry in the class, Phil Sharp on board Imerys, has been referred to the Race Committee Jury after apparently sailing through an area of water restricted to commercial shipping at Ushant. The Traffic Separation Scheme (TSS) off that busy corner of France is strictly out of bounds to the yachts in the race rules.

Sharp has been sailing a superb race in the early stages, regularly holding the lead, but he may face a penalty for the infringement. Contacted on the sat phone he said he had not realised the TSS was out of bounds.

“I was aware of the TSS and I kept well out of the shipping lane, but I wasn’t aware that it was a restricted zone – I wasn’t aware that there was a boundary,” he said. Sharp also revealed that he nearly lost his spinnaker when it detached from the rig as he was down below and ended up in the water behind the boat. “I looked up one time and the spinnaker was just not there,” he said. “I went on deck to find the whole thing in the water. But it’s fine and not damaged. I managed to get it back and re-hoist it after a couple of minor repairs.”

The Transat bakerly is already featuring some classic battles. At the front of the fleet the two leading Ultimes, Macif (Francois Gabart) and Sodebo (Thomas Coville) are a little more than a mile apart, heading down the Portuguese coast while, behind them in the southern Biscay, a battle royal is developing in the IMOCA 60 class.

The leader by a whisker is the hugely experienced Vincent Riou on board PRB who is just managing to stay ahead of the two leading foiling boats – Sébastien Josse’s Edmond de Rothschild in second place and Armel le Cleac’h’s Banque Populaire in third.

“Everything is fine, but we had to do a lot of manoeuvres during the night – it was a bit complicated, but as expected and I’m pretty happy with my position,” reported Riou earlier in the day. “The conditions are favourable for the foiling IMOCAs and will continue to be for a few days.

“I’m currently sailing under spinnaker in around 12 knots of wind. I’m trying to move quickly, but there is quite a lot of swell and there are still some sail changes to make. I’m staying vigilant, always looking out for the next transition. The weather is pretty nice compared to yesterday’s start and I was able to get some rest this morning. I am in good shape,” Riou added.

On Tuesday 3rd May, at around 1900hrs GMT+2, Erwan Le Roux, the skipper of FenêtréA Cardinal, sustained substantial damage to the port float on his Multi50 trimaran.

Erwan was leading The Transat bakerly Multi50 fleet when the incident occurred, sailing downwind in a northeasterly 25-27 knots, and was approximately sixty miles off Cape Finisterre. He managed to secure his boat before alerting his shore crew.

He is now in regular contact with his weather man to find the best landing point between Portugal and Spain, and is sailing at a reduced speed on a heading of 135°.