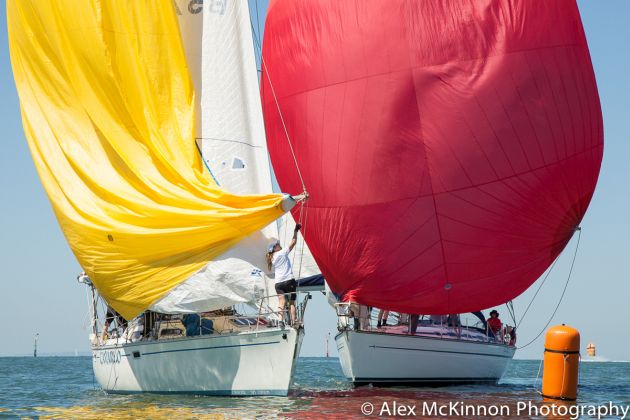 The 2016 Port Phillip Women’s Championship Series ended on a high yesterday, 1st May, not because racing was cancelled due to high winds but because 2016 marked the most successful year for this series to date.

The 33 registered teams waited on shore for host, Royal Brighton Yacht Club’s, decision to race. This last event is combined with the annual BLiSS regatta (Brighton Ladies Skippers Series) – a two day regatta that combines three short course races on the Saturday with the Port Phillip Championship Series long race on the Sunday.

Combining all regatta registrants bring the total participation to 71 boats for 2016; a staggering 17 boats more boats than the record 54 entrants set back in 2013. If anything this figure should serve purpose that the Port Phillip Women’s Championship Series objectives, of increasing female participation in sailing, is being achieved and even that women are beginning to feel more comfortable ‘taking the helm.’

Rosie Colahan, Events Coordinator for the Port Phillip Championship Series, is ‘over the moon’ at this year’s turnout:

“We’re thrilled! We are overjoyed by the number of boats wanting to be involved with this event. We completed four races of the series so can conclude our winners for the season. Even without the final BLiSS race we still beat our record numbers set back in 2013. Hopefully Clubs and other women notice this regatta and want to be involved next year!”

This season has seen some great milestones including the addition of the non-spinnaker division and the greatest participation numbers since this event’s initiation. Another great achievement has been the growth of some classes within the races. For instance, this year has seen 5 Bluebird’s join the fleet qualifying them for their own Class division – an outstanding achievement from Samantha Smith of ‘Blue Volvo’ who has been actively getting more competitors into this class.

The WISC series (Women in Sailing Challenge) hosted by Sandringham Yacht Club, was race one of the Port Phillip Women’s Championship Series. This day saw 18 boats hit it out with multiple races in one day. The weather for the first race had fair winds and calm seas – perfect to brush off the cobwebs.

The Val Hodge race, hosted by the Royal Yacht Club of Victoria, was race two of the overall series. Racing was delayed due to lack of winds but once the seabreeze struck provided the perfect conditions for some close knit racing. A great session on the water with only a couple wipe-outs!

The Shirley Freeman Trophy and Bollywood Cup, hosted by Hobsons Bay Yacht Club, sparked the gross number increase of participants to the race course. 22 boats hit the water for light and varying winds in some close duals for Division 2.

The Jennifer Goldsmith was the last on water race of the series hosted by the Royal Melbourne Yacht Squadron. The participation numbers grew here to 25 boats with winds starting strong then dissipating as the competitors completed the fixed mark course.

The next and final event for series is the end of season Port Phillip Women’s Championship Series and Port Phillip Women’s Passage Series presentations held on May 27 at the Royal Brighton Yacht Club. The event will acknowledge the winners of the divisions with extra prizes for encouragement, participation and the non- spinnaker competitors.

Following the conclusion of the Women’s Keelboat Summer series is the Australian Women’s Keelboat Regatta- the perfect event for those who want a three day show-down showcasing the skills they’ve gained over the past season’s racing. This event is held on the 11- 13 June at the Royal Melbourne Yacht Squadron and aims to be bigger and better than ever. If you’re after a highly competitive all- female regatta with social events scattered throughout, then register today! Simply visit www.awkr.com.au for more information and to register.

Congratulations to all competitors of this year’s event! Here are the winners in each division. For all results please click here.