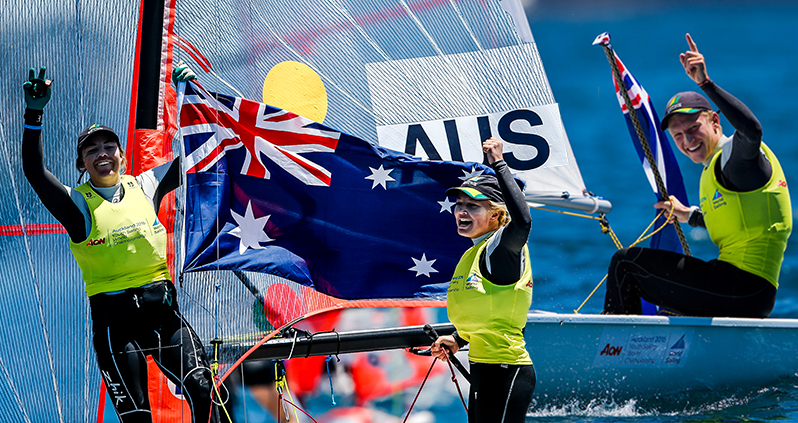 Natasha Bryant and Annie Wilmot celebrate their win at the Youth Worlds.

Former Youth World Champions in the 29er, Natasha Bryant and Annie Wilmot, will use their results against New Zealand’s 2016 Olympic silver medallists at Sail Sydney next week as a gauge for how they’ve progressed since switching to the 49erFX class earlier this year.

It has been a breakthrough 12 months for Bryant and Wilmot, who claimed the world crown last December in New Zealand, were jointly named Australian Sailing’s Female Sailor of the Year last month and announced they would step up to the bigger boat in search of a berth on the Australian Sailing Team for Tokyo 2020.

The best indication of how they are tracking since the change will come when the pair confront Kiwi duo Alex Maloney and Molly Meech, who this year added a 49erFX World Championship bronze medal to their second placing in Rio.

“We're not only hoping to learn as much as we can from them, but to see how we're going,” skipper Bryant said. “We did race them [at the Worlds] in Portugal, but we’d only been in the boat a couple of months so we are really looking forward to seeing our improvement over the year. We're very excited to line up against some of the best 49erFX sailors in the world.”

About 350 entries are expected in Olympic and Invited classes at Sail Sydney, hosted by Woollahra Sailing Club, with 12 countries represented and competitors aged between seven and in their 70s. The entire Australian Sailing Team will compete against the likes of Finn World Champion, Max Salminen of Sweden, and ex-World Champion, Ed Wright of Great Britain, while the Laser fleet boasts sailors from seven nationalities and four Australian states, including 2016 Olympic gold medallist Tom Burton and bronze medallist, Sam Meech of New Zealand, the brother of Molly Meech. Australia’s 2012 Olympic Laser gold medallist Tom Slingsby won silver in the Finn class in Melbourne and is expected to compete at Sail Sydney.

“It’s a 100-point regatta, so that’s had a direct impact on attracting some amazing international competition,” said Declan Brennan, Australian Sailing’s Regional Manager NSW and ACT. “We’ve got 12 countries represented from as far away as Bermuda, Sweden and the Netherlands, as well as some good representation from Asian sailors.”

Nearly 100 entries in the Optimist class have been received, a phenomenal number at this time of year, Brennan said. And, they should anticipate great sailing conditions, he added, with the first part of the week set to produce a north-easterly breeze of up to 20 knots each afternoon before a change nearing the weekend.

Whatever the conditions, Bryant and Wilmot will stay focused on continuing their transition into Olympic class racing.

“It's been a huge learning curve for us this year but we are loving the challenge,” Bryant said.

“I’m so lucky to be sailing with my best friend, we always have each other's backs and are both eager to learn as much as we can. I think that's why it works so well.

“We're also so lucky to have such supportive families and an amazing coach, Traks Gordon, who have helped us along our journey. We can't wait to see what the future has in store.”