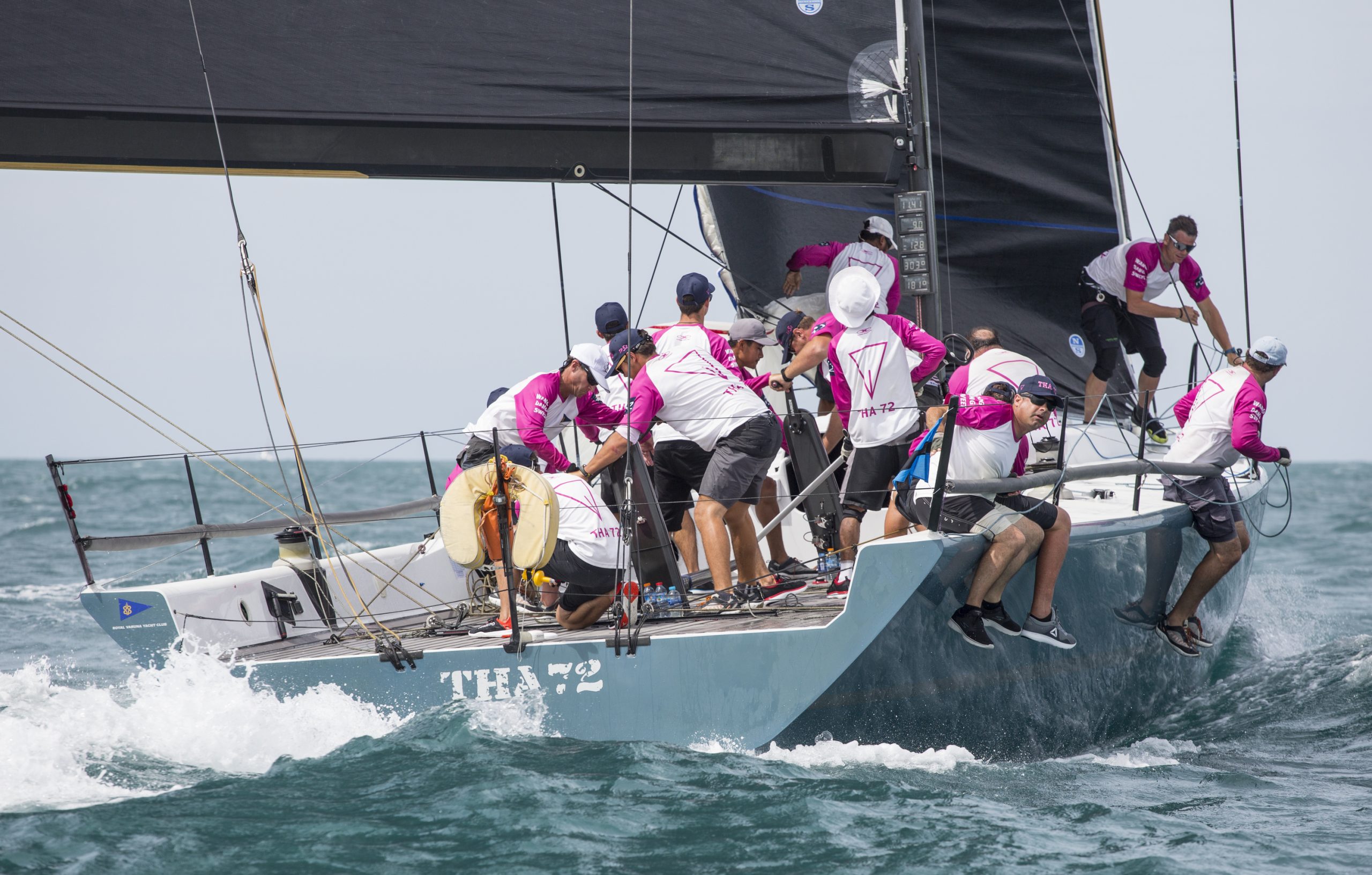 Phuket, 6 December, 2017 – Perfect breezes at 12-15 knots on top of two whole days of strong wind had the swells riding higher today, and conditions that were way more “Rock ‘n’ Roll”. Nevertheless, it’s time to set up the early runners and riders at the midweek point. Kevin Whitcraft’s THA72 crew has a very credible early claim on regatta glory, as does Team Kata Rocks (Peter Dyer’s Madam Butterfly) in IRC2. Premier Class, IRC1, the one-make Pulse 600 class and the Modern Classics are all tied up with joint leaders at the top of each class, so let’s see what the midweek shakedown brings.

Nick Burns and Fred Kinmonth on Otonomos Mandrake took two wins today in IRC1, with Chinese team Shenzhen Seawolf (Red Rum) coming back to take the third race of the day (Race 8, by this stage of the regatta). This is the most wide-open class this year with a field full of rivals snatching at their heels; Karasu (JPN), Loco (SIN), Fujin (AUS), and it might go down to the wire when Saturday comes.

IRC2 this regatta has played host to some great strategic racing between Peter Dyer’s Kata Rocks (Madam Butterfly) and Big Boys Racing (Farrgo Express), a Chinese entry skippered by Shen Sheng. True to form they took a win each today. Another dual-header has been playing out amongst the Fireflies, between Twin Sharks (skippered by John Newnham, GBR) and Hans Rahmann’s Voodoo. The Brit and his crew took both wins today, but that doesn’t quite do justice to the duel – just 23 seconds separated them in Race six.

John Newnham explains the dramatic week of Firefly racing so far, “It was really unfortunate on the first day when we had a collision with Ray Waldron (Surf Patrol), we basically came across and the two boats hit. We felt bad about it and offered Ray our boat, but he decided to continue with his own. We’re good friends, happily! After losing the points on Monday, we’ve won everything we’ve entered. The competition is very strong among the five-man crews of the Firefly fleet. We’re going to enjoy a few beers on the rest day tomorrow, and after that any of four boats could win on Friday and Saturday. The competition is very tight, so anyone could win the class”.

Glorious sunshine all day, reliable winds and some fairly heavy chop made for a great King’s Cup Day Three, save for the broken equipment and early retirements. Fingers remain tightly crossed that things will stay this perfect until Saturday.