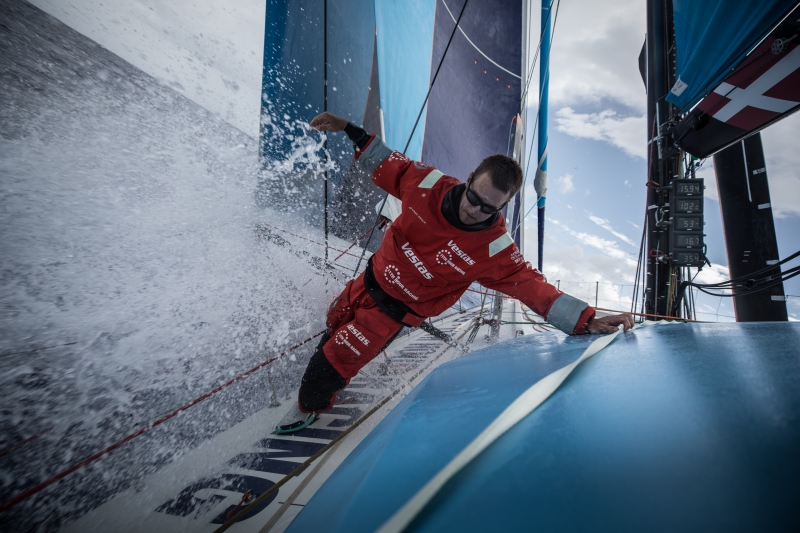 Vestas 11th Hour Racing has had a productive 24 hours on Leg 8 of the Volvo Ocean Race, cutting its deficit to leader Turn the Tide on Plastic in half.

“It’s a beautiful Saturday morning here on the Atlantic Ocean,” he said in a call to Race Control. “Sunny skies, not too much cloud action which is nice, and we’re chipping away. We can see Turn the Tide on Plastic which means we’ve come into them quite a bit overnight.

The leaders are sailing in light to moderate trade wind conditions, with 8 to 12 knots of wind just behind the beam – one of the fastest, and most comfortable, sailing angles for the Volvo Ocean 65s.

At 1100 UTC on Saturday, Turn the Tide on Plastic was fighting to hold on to its lead which had dropped to just 5 miles with Dongfeng Race Team and Team Brunel a further 10 and 15 miles back respectively. And team AkzoNobel is in close contact with Brunel.

“We are still the hunted, however we are now sailing in company again as we’ve been able to see Vestas since the early hours of the morning,” skipper Dee Caffari wrote on Saturday from on board the leading boat. “They are slightly inshore of us in more favourable current and have been slowly reeling us in over the last few position reports.

“The cloud activity was much less last night and everyone got some good rest on board so we are in good spirits.”

The teams are enjoying this respite of more stable conditions after days of constant sail changes due to the cloud activity bringing squalls which cause big movements in wind speed and direction.

“We’re almost thinking of having something like a ‘no sail change Sunday’,” said Brunel’s Peter Burling, when asked about his wish for the weekend. “We’ve been working a lot of overtime recently.”

For previous race leader MAPFRE, it’s been a difficult 48 hours. Bad luck with the cloud activity has pushed them down the rankings and they are now 45 miles behind the leader and trailing rival Dongfeng by 30 miles.

“We know we now have to play catch-up, and we are all taking on the challenge,” says navigator Juan Vila. “Wind conditions now are forecast to be steadier, with smaller showers, if any, today. Right now we sail along in a moderate ESE trade wind, which is forecast to last until the approach of Recife.”

At the back of the fleet, Scallywag has tucked in behind the leaders to wait for another window to attack. Perhaps the doldrums will provide some salvation.

“Finally some decent breeze and no significant cloud dodging to be done,” writes navigator Libby Greenhalgh. “Just 400nm or so until the doldrums and that fun and games begins. Hopefully it will create opportunity for us.

“It has not been the best 48 hours as we are punished for our westerly position. We have now tucked in neatly behind the fleet and will have to wait for our moment later in the race… There is for sure plenty more to be seen from this squad.”