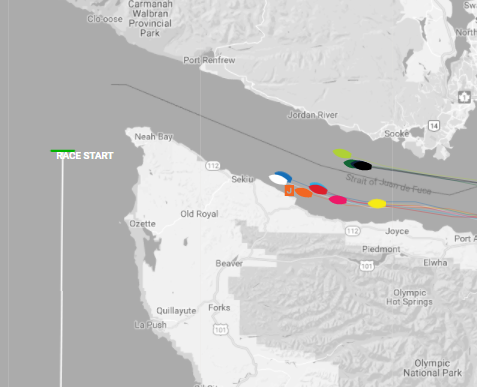 The fleet approaching the start line. All positions correct at time of publishing.

The Clipper Race fleet is making good progress towards the start line of Race 10: The Garmin American Challenge to Panama, after bidding Seattle a fond farewell.

Visit Seattle gave its home port one last show by winning the short course race inside Elliot Bay, crossing the line ahead of Sanya Serenity Coast and Liverpool 2018. Visit Seattle will now have the advantage of being the windward boat when the 4,100 nautical mile race to Panama officially begins in the vicinity of 48°20.000N, 125°00.000W at 1600 local time today (2200 UTC).

The short course race was also a chance to blow out a few cobwebs before a tricky race full of light and unpredictable winds. Sanya Serenity Coast Skipper Wendy Tuck explains: “I had the worst start I've ever had. I was way too early and had to bail out and come back again, so we crossed the start line last. Not my finest hour.

“At the first mark we were still behind the fleet, the next mark we caught up a few boats and snuck inside, so we eventually we were looking at a fourth place which was OK, but then because of a misread of the finish line, we got up into second, so a bit of a comeback.”

The 125 nautical mile motor from Seattle to the start line will be another chance for those on board to get into the swing of things. Garmin Skipper Gaëtan Thomas says: “We will have around 6 hours to practice some sailing in watches prior to race start, which will be good as here on board we do have quite a big changeover for this race.”

Nasdaq is also putting the time in Puget Sound to good use, as Skipper Rob Graham reports: “We are using this time to check everything on the boat and get our newly-joined crew settled into life on board without the pressure of racing.”

The consensus across the fleet is that all on board are the better for the time in Seattle. Dare To Lead Skipper Dale Smyth comments: “After our tough North Pacific crossing, Seattle was all you could wish for. The weather was beautiful, the food amazing, the city vibrant, and we managed to affect all of our repairs in good time.

“We are now off down towards sunnier climes as we head south, and the thermals will slowly give way to shorts and sun cream. We will not, however, be complacent, as all oceans should be respected.”

As Clipper Race Meteorologist Simon Rowell reports, the North Pacific Ocean should treat the fleet well as it heads south, with the current high-pressure system pushed up against the coast by the deep low to send a rolling swell in from the west-northwest to northwest. The teams will be racing to move past San Francisco by mid-week in order to avoid the light patch developing in the region.

As the Clipper Race departs Seattle for the penultimate leg of its 40,000 nautical mile circumnavigation, it will be engaging in pioneering scientific research. Visit Seattle has been fitted with a special sensor for the US Coast-to-Coast Leg 7 which will monitor the effects of ocean acidification around the US Coast. Read more about the project here.

To follow the progress of Race 10: The Garmin American Challenge from Seattle to Panama, keep an eye on the Clipper Race Viewer. You can also read the daily Skipper Blogs in full on the Team Pages, as well as keep up with the latest on board in the Crew Diaries.