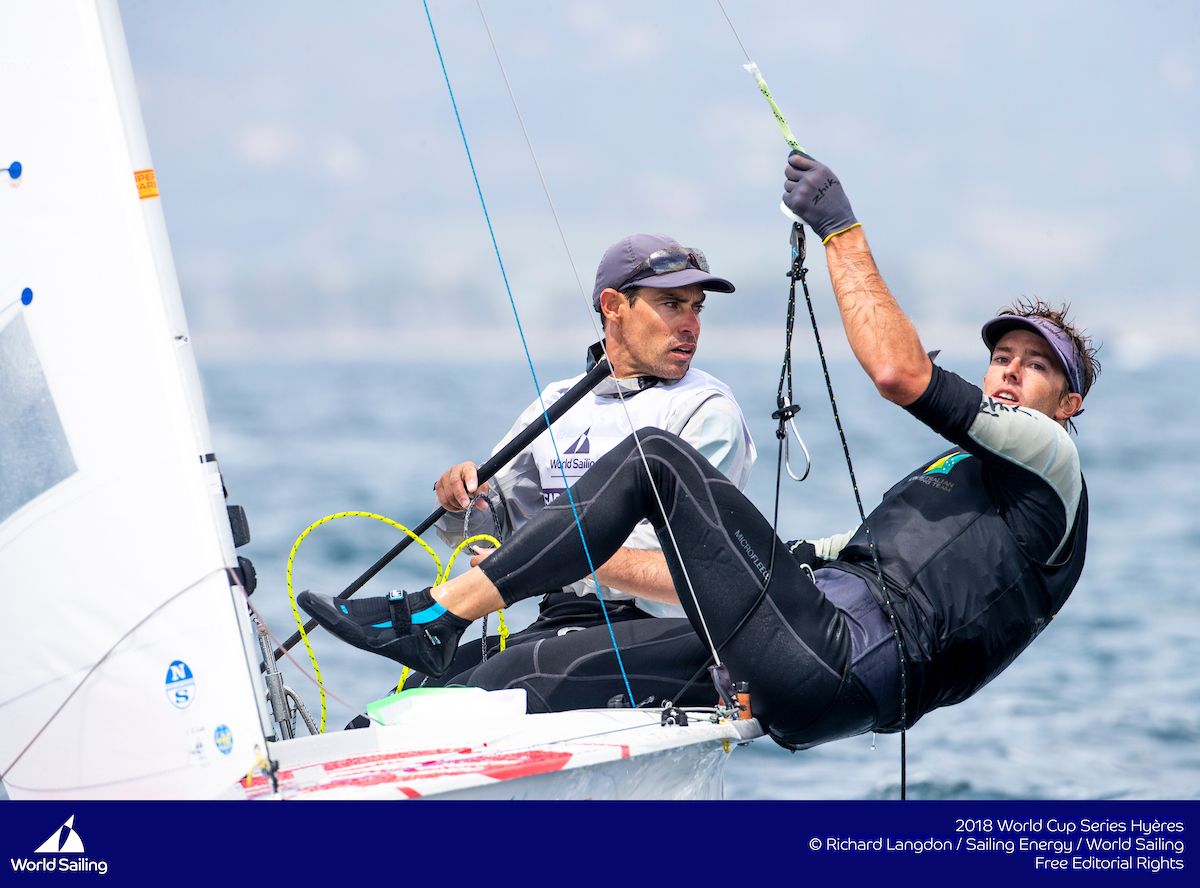 28/04/2018
The South of France delivered a sensational day of sunshine and some stable breeze, living up to its name as a famous sailing location on the fourth day of competition at Sailing's World Cup Series in Hyères, France.
After three days of light and testing winds under grey and foggy skies, the sun shone proudly on day four, enabling the competitors to start on schedule.

For the 2.4 Norlin OD, 49er, 49erFX, Nacra 17, Men's RS:X and Women's RS:X, it was their final opportunity to make their mark at the top of the fleet or qualify for Saturday's Medal Races.

The 470s, Laser, Laser Radial and Finn fleet leaderboards took shape with clear frontrunners emerging. They have one more day of fleet racing with Medal Races on Sunday.

Ahead of the Medal Race, Italy's Ruggero Tita and Caterina Marianna Banti (ITA) sealed Nacra 17 gold following a 2-5-1-1 scoreline which gives them an unassailable 40-point lead over Ben Saxton and Nicola Boniface (GBR).

From the 11-race series, the Italians have only finished out of the top five twice, mastering the conditions thrown at the 30-boat fleet.

Saxton and Boniface have all but confirmed a medal, sitting 15-points clear of Vittorio Bissaro and Maelle Frascari (ITA) and 20 clear of Iker Martinez and Olga Maslivets (ESP).

The real battle in Saturday's Medal Race will be between Bissaro and Frascari, the Spanish duo and Austria's Thomas Zajac and Barbara Matz. The trio are separated by six points and will all be targeting one of the final places on the podium.

Nicholas Heiner (NED), Jorge Zarif (BRA) and 2017 Hyères World Cup winner Alican Kaynar (TUR) continued their top of the table battle in the Finn fleet. The trio secured two top ten places each to solidify their spot within the top three but it's Heiner who leads the way. Heiner secured his fourth victory of the week on Friday and added an eighth, giving him a four-point cushion over Zarif.

“We had beautiful conditions today and finally some pumping downwind,” commented Heiner. “My first race was nice, scored a first. I managed to have a few good downwind legs and pass a few good sailors. Unfortunately, I had a bad start in the second race, but I crawled my way back into the top ten.”

Heiner has consistently been at the top of the Finn fleet after switching from the Laser in 2016 and is pleased with how he's performing amongst seasoned Finn sailors, “I am trying to be as consistent as possible in all my races and I think that has proven to be a success so I will continue doing so.

“The competition can be quite hard, we have some great sailors here. Giles Scott isn't here which is unfortunate but it's highly competitive.”

Zarif finished third and ninth from both of the day's races which puts him two points clear of Kaynar who has a ten point gap over Ondrej Teply (CZE). The leading trio are expected to continue their battle on Saturday to position themselves nicely ahead of their Medal Race. Jake Lilley (AUS) sits in fifth place but he is 17 points off third.

Damien Seguin (FRA) picked up his seventh race win in the 2.4 Norlin OD to open up a nine-point gap over Antonio Squizzato (ITA).

The first ever 2.4 Norlin OD Medal Race will take place on Saturday and will be streamed live on World Sailing TV – www.youtube.com/worldsailingtv. Mathematically, Squizzato can overhaul Seguin but the Frenchman has sailed superbly all week and is unlikely to let his tenth Hyères gold medal slip.

Four 49erFX races stirred up the leaderboard ahead of the Medal Race. Ida Marie Nielsen and Marie Olsen (DEN) sailed consistently to overhaul the early pacesetters, Helene Naess and Marie Ronningen (NOR), who dropped to third.

“We made a few small mistakes which cost a lot. In the last race we made a mistake on the first upwind. We went from tenth to 20th in about 15 seconds and then we were stuck in the middle of the fleet fighting for a comeback.

“We had more wind today than the rest of the week, so it was a good day of racing.”

New Zealand's Alex Maloney and Molly Meech are five points off the Danish duo with the Norwegians, who were unable to find the consistency that served them well at the start of the week, 16 points off the leaders.

The stars of the day were Charlotte Dobson and Saskia Tidey who moved up into medal contention after a 1-6-4-1 scoreline. They are one point behind the Norwegians. Tash Bryant and Annie Wilmot (AUS) are in ninth place but out of medal contention, while a couple of high scores dropped Amelia Stabback and Ella Clark out of the top 10 to 14th place.

As the day went on the breeze started to diminish and just one race was possible for the 49er fleet.

Dominik Buksak and Szymon Wierzbicki (POL) moved back into first place after a third in the single race and lead David Gilmour and Joel Turner (AUS) by a single point after they finished 20th. Belgium's Yannick Lefèbvre and Tom Pelsmaekers are ten points off the Aussies in third.

Marit Bouwmeester (NED) has opened up a huge lead in the Laser Radial. A first and a second from two races gives her a 42-point advantage over Maité Carlier (BEL). The gap between the joint third placed sailors, Anne-Marie Rindom (DEN) and Monika Mikkola (FIN) is even larger and she is on track to claim the honours with two fleet races on Saturday before Sunday's Medal Race.

Meanwhile, in the Laser fleet, consistency is a rarity with every sailor counting at least three double point scores.

Jean Baptiste Bernaz (FRA) has put himself at the front of the pack but only has a minor advantage with Filip Jurisic (CRO), Sam Meech (NZL) and Tonci Stipanovic (CRO) all within striking distance. Olympic champion Tom Burton (AUS) holds ninth place but is out of contention for a medal.

Peina Chen (CHN) reduced Zofia Noceti Klepacka's (POL) lead on Thursday but the Polish racer made sure there were no further slip-ups on Friday as she opened up a 13-point lead ahead of Saturday's Medal Race.

Klepacka's 5-6-5 scoreline compared to Chen's 10-9-6 gives her a healthy advantage. Noga Geller (ISR) is six points off Chen in third.

The day's three race wins went the way of Emma Wilson (GBR), Yunxiu Lu (CHN) and Charline Picon (FRA) who moved up to fourth after two fourth-place finishes in the other races.

France's Pierre Le Coq moved 12-points clear of compatriot Louis Giard in the Men's RS:X after a 6-3-12 from the day's races. In turn, Giard is 14-points clear of Mengfan Gao (CHN).

Mat Belcher and Will Ryan (AUS) won both of the Men's 470 races to move into medal contention but the leaders from the opening day, Anton Dahlberg and Fredrik Bergström (SWE) finished behind them in both races to retain their lead.

The Swedes top the bill on 14 points, Belcher and Ryan follow on 31 and Tetsuya Isozaki and Akira Takayanagi (JPN) are third on 33.

Saturday's Medal Races commence at 12:00 local time with the remaining fleets starting at 11:00.