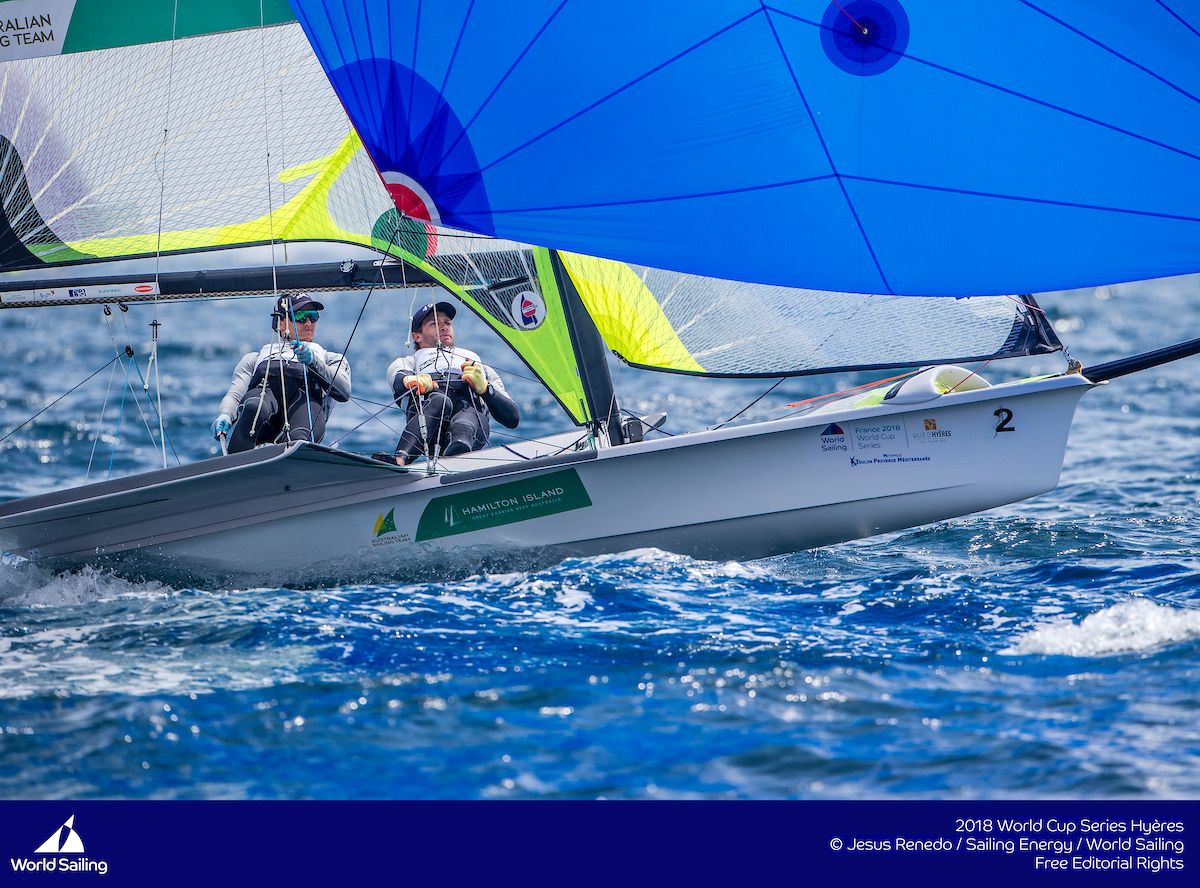 The third day of competition at round three of Sailing’s World Cup Series in Hyères, France provided further challenges for the competitors as light winds continued to dominate.

The 647 sailors from 46 nations racing across the ten Olympic disciplines and one Para World Sailing event contested a variable 5-7knot breeze on day three which enabled the light wind specialists to move to the front of their fleets.

French sailors occupy the top three spots in the Men’s RS:X with Rio 2016 Olympic bronze medallist Pierre Le Coq (FRA) leading the way at the front of the fleet.

The fleet sailed two gruelling light wind races that involved an extreme amount of physical exertion as they pumped their sails to make gains. In the tough conditions, Le Coq did enough to take the lead, “I managed to have a good first race, finishing seventh, but had a bad second race and finished 15th,” he commented. “The conditions were physically draining and the fleet in these conditions were really close, so you couldn’t afford to make a mistake. It was difficult because of the uncertain weather and it was too shifty and quite challenging to predict what was going to happen. This made it hard to be consistent.”

Just one race was completed in the Women’s RS:X. Japan’s Megumi Komine claimed a rare victory, leaving her in 23rd place. Zofia Noceti-Klepacka (POL) retained her lead although it was dented by Peina Chen (CHN) who finished seventh compared to Klepacka’s tenth. Noga Geller (ISR) advanced to third overall after a second.

Anton Dahlberg and Fredrik Bergstrom (SWE) continued their consistency with a fifth and a second from two Men’s 470 races. They are five points clear of Paul Snow-Hansen and Dan Wilcox. Mat Beclher and Will Ryan (AUS) are in sixth place but just six points out of third.

“It was a long day on the water,” said Dahlberg. “We had four races, two races got abandoned because the wind dropped but we had a great day with two great starts. Our plan was to keep it simple and we did that well.

“We are halfway through the regatta so far, so a lot can change but we feel very confident running up to the Medal Races.”

Japan’s Tetsuya Isozaki and Akira Takayanagi are 13 points off the leading Swedes in third.

Camille Lecointre’s comeback to the World Cup Series continues to go from strength to strength. Sailing with Aloise Retornaz, the French Rio 2016 Women’s 470 bronze medallist picked up a fifth and a fourth to take a six point lead over Silvia Mas and Patricia Reina (ESP) into Friday’s racing.

“We are in our home country and we do train here sometimes,” said Lecointre. “After finishing fourth in Palma recently, we hope to achieve a medal this time. However, we are just using this event to train to be ready for the [Hempel Sailing] World Championships in Aarhus, [Denmark].”

David Gilmour and Joel Turner (AUS) won the sole 49er race which was enough to propel them into the lead, overhauling Poland’s Dominik Buksak and Szymon Wierzbicki who led during the first two days. The Polish duo finished 32nd in the race and although they discard it, they drop to third. Diego Botin and Iago Lopez (ESP) moved up to second after a fifth.

It is tight at the top in the 49erFX but Norway’s Helene Naess and Marie Ronningen continue to lead after one single race on Thursday. Denmark’s Ida Marie Nielsen and Marie Olsen reduced the deficit to four points to occupy second place. Meanwhile Alex Maloney and Molly Meech (NZL) slipped down to third but firmly in contention for gold.

There is a great battle between the two Australian crews with Amelia Stabback and Ella Clark sitting in eighth place, just a point ahead of Tash Bryant and Annie Wilmot.

Damien Seguin (FRA) got back in the winning groove in the 2.4 Norlin OD, snapping up another pair of victories. He is now four points clear of Antonio Squizzato (ITA) and six ahead of compatriot Bruno Jourdren.

It was a late finish for the Finn fleet as they came ashore at 19:50. Nicholas Heiner (NED) leads, Jorge Zarif (BRA) follows in second place and Alican Kaynar (TUR) climbed up to third. Jake Lilley (AUS) has dropped to sixth place.

The Laser fleet managed to sail two races and although the conditions were similar to the day prior, a significant shift in the leader board occurred. The early pacesetter, Tonci Stipanovic (CRO) finished 44th and 20th in two races. He discards the 44th but counting the 20th, he has dropped to sixth.

In the Laser Radial, Marit Bouwmeester (NED) continues to hold first place however Maité Carlier (BEL) moved up from fifth to second. Finland’s Monika Mikkola shifted up one spot to third.

There was not much change on the Nacra 17 leaderboard. The Italians, Ruggero Tita and Caterina Marianna Banti, hold onto their lead after day three, whilst Ben Saxton and Nicola Boniface (GBR) remain second. The Brazilians, Samuel Albrecht and Bruna Martinelli Cesário de Mello, moved up one place and now sit third.

Friday’s racing will be the final day of fleet racing for the 2.4 Norlin OD, 49er, 49erFX, Nacra 17, Men’s RS:X and Women’s RS:X ahead of their Medal Races on Saturday 28 April.

The remaining fleets will complete their series on Saturday with Medal Races following on Sunday.