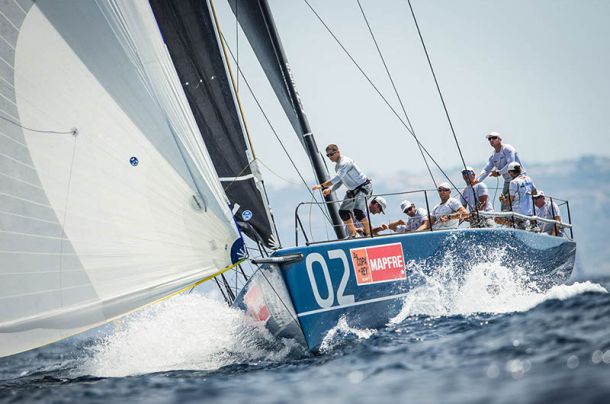 Twelve TP52s from eight different nations will compete on the renowned Atlantic waters off Cascais, at the mouth of the Lisbon’s Tagus river, in next week’s finale to the 2015 52 SUPER SERIES.

Although it will be the third time the world’s leading grand prix monohull class, the TP52s, have raced from Cascais, which has a well-deserved reputation for serving up big winds and big seas in the early and late season periods especially, this is the first time that the 52 SUPER SERIES has visited the venue which is especially favoured by sailors and owners alike.

Coming at the end of a season which has so far mostly dealt up light to moderate breezes, the prospect of a proper end of season blast to settle the final 2015 placings is one which most teams are relishing.

For the Azzurra team, the 2015 title is more a probability than possibility. The team of the Roemmers family which flies the colours of the Yacht Club Costa Smeralda seem to be on the right course to lift the 2015 championship title. The runaway winners of the 2015 World Championship and the June’s Settimana delle Bocche regatta, Azzurra will start the fifth and final event of the season with a comfortable lead of 35 points over Quantum Racing. But the team which won the inaugural title in 2012 know only too well that a technical breakdown is the biggest threat to their title victory. The usually robust conditions off Cascais would not be first choice when seeking to close out a title with any kind of lead.

“We are ready and prepared. Cascais is a demanding venue with potentially strong breeze and big seas. Overall, as a team we like those conditions but need to make sure we get to the last day with no breakages in order to finish the season properly.”

Twice in a row overall champions Quantum Racing, chasing in second place on the season standings, will have Ed Baird back on the helm with Adrian Stead as tactician, an afterguard set up which is already now proven and settled this season, but which was also in force when Quantum Racing won the MedCup curtain raiser in 2011. The Quantum Racing team are riding a wave of confidence after winning the 34th Copa del Rey MAPFRE in Palma, the fourth regatta of the season.

“We are totally realistic about the situation facing us in Cascais.” Assures Quantum Racing’s team director Ed Reynolds, “We just want to go to Cascais and to sail well. Everything is now well tested and put together and I think we can have a good regatta. We have never not been on the podium at the end of a season. Azzurra have done a good job this season and deserve to celebrate. Last year I think we were dominant in light to mid range conditions, we were so quick, and this year we have not really had a sweet spot. But Cascais is a special place for us. I think that in 2011 with this combination we won five of ten races so I know we can do well. And I think that we go there knowing we have a complete boat, a good package.”

While Azzurra, Rán Racing, and Quantum Racing have shared out the regatta titles this season there is no shortage of teams which have the tools and the personnel to win overall in Cascais. Germany’s Harm Müller Spreer and his Platoon lead in Palma and has two back to back podiums to his credit. Andy Soriano’s Alegre, Vladimir Liubomirov’s Bronenosec and Takashi Okura’s Sled have proven strong enough if they can compose a full string of top line consistent results. Underlining how close the winning scores have been this season, three points was the winning margin in Valencia, Sardinia and Palma. Only in Puerto Portals did Azzurra streak clear of the pack.

And the Portuguese regatta will have a stronger US presence than ever before with the Stars & Stripes flying for four teams. After debuting in Palma as Spookie, Steve Benjamin’s crew return for their second regatta on the former Interlodge and Vesper, Jim Swartz’s well drilled, talented team will be in Cascais. Just as they did last year when they sailed to second at their one 52 SUPER SERIES of 2014, Vesper race only one 52 SUPER SERIES event in Europe but will be a podium threat.