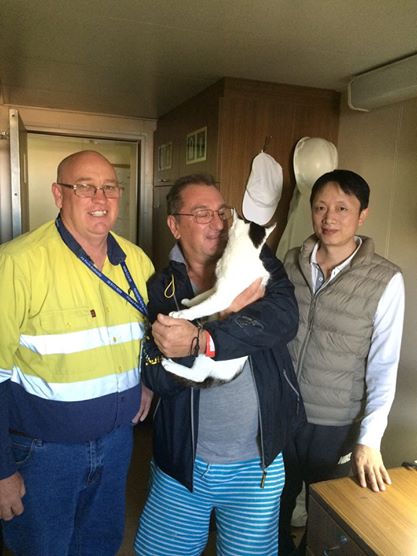 A man has been rescued after his yacht started taking on water off the coast of Denham in Western Australia.

It is understood an emergency beacon on the vessel was activated off Denham this morning.

The 12-metre boat, dubbed the Osprey, was believed to be 40 nautical miles south of Steep Point, near Shark Bay.

There were earlier reports a local rescue plane had spotted three people on board the life raft.

However, the ABC now understands the skipper was the only person on board.

Update from AMSA on Tuesday:

AMSA is very pleased to report that Grant McDonald, who was rescued off the West Australian coast on Friday, has now been reunited with his cat Major Tom.

Mr McDonald set off his emergency beacon after his yacht began taking on water south of Steep Point, about 277 kilometres north of Geraldton. AMSA asked the bulk carrier Shi Dai 8 to divert to the area where they rescued Mr McDonald and Major Tom from a life raft.

On Saturday Mr McDonald was transferred by helicopter to Ger…aldton for medical treatment, but unfortunately Major Tom was unable to accompany him on the flight.

The Shi Dai 8 arrived at Geraldton Port this morning where Mr McDonald attended the ship to collect Major Tom and thanked Captain Tang Jianbing and the crew for their help in his rescue.

AMSA also wishes to extend its thanks to Captain Jianbing and the crew of the Shi Dai 8 for their assistance in this rescue and to the ships agent SeaCorp for organising the safe return of Major Tom.