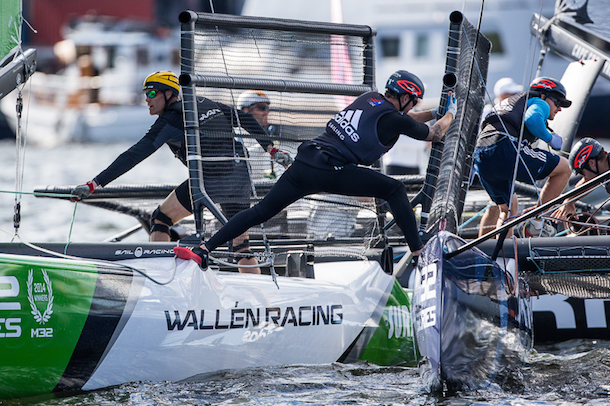 Over a thousand spectators on the North shore of Riddarfjärden and thousands of fans around the world were treated today to some of the most exhilarating live sailing ever seen, on the second day of racing for the M32 Series Scandinavia finale in Stockholm, Sweden.

Despite dominating the previous four events on the tour, Match racing world champion Taylor Canfield (USA) and his American-based US-One team sailed their worst performance of the year, while Nicklas Dackhammar (Sweden) and the near-flawless work of his Gothenburg-based crew saw the young Swede jump to the top of the leaderboard – and the overall series. “We were able to get ahead of the fierce fighting behind us today, and that made a huge difference to our results,” said Dackhammar, who leads the fleet by 6 points – the same gap that separates positions 2nd through 5th. More importantly, if positions remained the same at the end of the regatta, Dackhammer would end the season tied on points with Canfield, taking the all-important M32 Series trophy on countback. Dackhammar says it’s far too early to consider that. “We’re not even halfway through the event, and we’ve got to continue to perform in every race to have even a chance at beating US-One,” he said.

Danish skipper Jes Gram-Hansen (Team Triform Tuborg Yacht Klub) overcame a penalty point and several weak starts to power to a solid second place on the day, and Hansen was all smiles after racing. “This was probably the best day we’ve ever put together, and we’re looking forward to more action like this tomorrow,” he said.

Yesterday’s leader Martin Strandberg (Alite Racing) was surprised to be in 3rd place after what he felt was a weak performance. “We had a few good starts and a few bad ones, but overall we just felt like we didn’t have the boatspeed we’ve had in the past,” said Strandberg.

Reigning M32 Scandinavian Series Champ Hans Wallén (Wallén Racing) couldn’t seem to get out of the starting blocks with several last-place finishes. To add insult to injury, a violent collision with US-One holed his M32 catamaran. “It was either hit the concrete sea wall or hit Taylor, and even though the crowd would have loved it, we opted for the softer target,” said Wallén. Canfield was assessed a 2-point penalty for the collision. “We have a difference of opinion on who was at fault, but we’ll settle it on the course tomorrow,” said the ever-optimistic Canfield.

Newcomer Nautiska Racing sent skipper Björn Hansen to the airport this afternoon to attend a regatta in Newport, Rhode Island, with Olympic Nacra sailor Tim Shuwalow taking the helm in his place. While Hansen watched from an airport lounge, Shuwalow helmed the brand new Nautiska Racing to their best results of the week – a 3,4 for the final two races.  Shuwalow said his biggest surprise was just how much power the ultra-light catamaran develops with its carbon-fiber mast and sails. “It’s a real challenge to manage all that power, but when you get it right, the boat really flies. ”Shuwalow will continue to helm Nautiska for the remainder of the event.