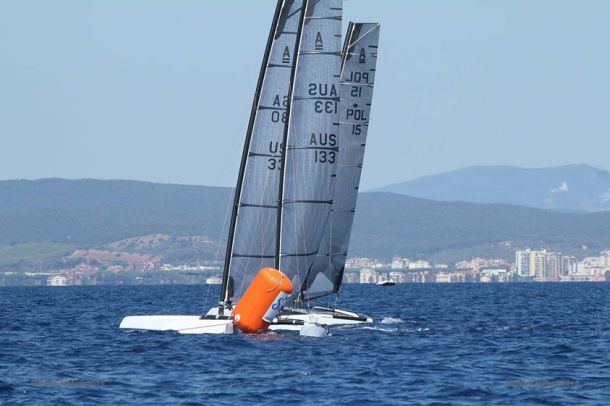 Jason Waterhouse hits the mark at the A Class Worlds. Photo A Class Assn.

Eight-times world champion in the A Class, Australian Glenn Ashby, has maintained his incredible undefeated record at the Worlds in Punta Alta, Tuscany. However, he is only tree points ahead of Mischa Heemskerk (NED) who has been second to Ashby in every finals race so far.

As always from this event, the details are very sketchy but the two races today were held in medium to good breeze with a growing chop.

Meanwhile, Ashby's compatriot and rising star of the catamaran classes, Jason Waterhouse, was brought crashing down to earth after hitting a mark and a mark boat. Despite the mishap he sits in sixth place, two behind compatriot Steve Brewin. Another Australian, Scott Anderson, is ninth, while class president (and Jason Waterhouse's coach in the Nacra 17 Olympic class) Andrew Landenberger is 13th.