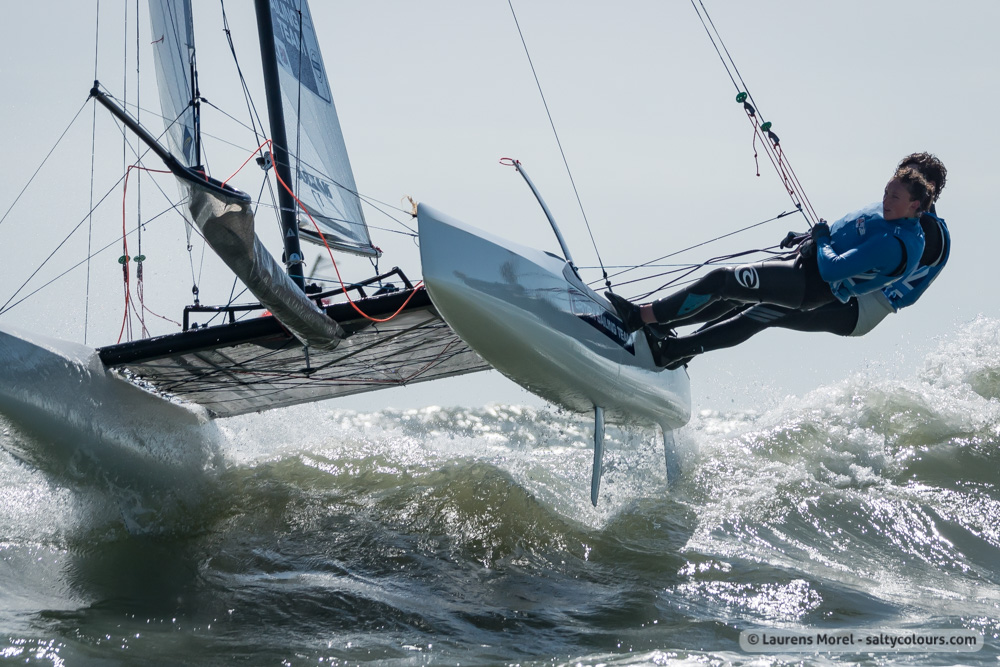 Allan Norregaard and Anette Viborg Andreasen rocketed up to second place overall in the Nacra 17 World Championships, the Danish duo showing a rare mastery of the demanding conditions on the turbulent waters of Clearwater Beach, Florida.

After failing to score a finishing in the single race of day one, the Danes were the only team to finish inside the top 10 of all four races, held in 20 knots and very rough, steep waves. Scores of 2,6,5,6 have shot the 49er bronze medallist from London 2012 into second overall, although still some way off the series leaders and winners of the past three Nacra 17 World Championships, Billy Besson and Marie Riou. The French stars sit at the top with scores of 1,1,4,1,(15), while their compatriots and training partners Moana Vaireaux and Manon Audinet sit 4 points behind the Danes in 3rd overall.

The top two French teams managed to put the stress of a measurement protest behind them last night when the French were accused of having illegally adjusted the daggerboard cases that hold the curved foils that help lift the boat out of the water at high speed. Small changes in the angle of attack of these foils can make a big difference to performance, so this part of the boat is millimetre-critical. To the relief of the two French teams, the International Jury found in their favour and they bounced back with an impressive performance on the water.

Vaireaux seemed unfazed by the protest, speaking after racing today. “It was OK, it can happen, we do a mechanical sport. It is part of the game and we know we did nothing wrong, so it was good to come back [with a good performance today]. Billy and Marie are three-time World Champions, so everyone is looking at them, and we train together with them. People are asking questions, but we didn't do anything wrong. It's the game, it's sailing, we have to go through that.”

Even in the bright Florida sunshine, sailors were shivering as they came ashore. “I only brought my summer wetsuit,” smiled Vaireaux, trying to warm up in the afternoon sunshine. “But today’s conditions were good for us, we like the big waves and big wind. It was really shifty during the races but we made good decisions. Upwind it was about choosing your moment to tack in the wind shifts.”

Other sailors that showed bursts of pace in the big breeze included the Italians, Vittorio Bissaro and Silvia Sicouri, who won the last race of the day, and Tom Phipps and Nicola Boniface from Great Britain who won the second race of the day, even if they didn’t know it at the time. “It was very close at the finish, and we thought the Argentineans crossed the line before us,” said Boniface, grinning after her first ever race win in a World Championship. “Always good to win a race, makes you smile!” The winning strategy was simple enough. “We went fast in the right direction and protected on the other boats. Today was quite a lot about boatspeed, if you went fast and got around the course safely you were going to do pretty well.”

The Argentineans they just pipped to the post were Santiago Lange and Cecilia Carranza Saroli. Lange, sitting in 15th overall, was not happy with his day, although at least the 54-year-old Olympic medallist has secured his place at Rio 2016 where he will represent Argentina for the sixth time at an Olympic Games. “Today’s conditions were very difficult for us, we are not well practised and we suffered with lack of speed and a couple of mistakes. But it’s good to be here, and with my sons here as well.” His sons, Yago and Klaus Lange, are racing at the 49er World Championship also taking place in Clearwater, and they too have qualified to represent Argentina at Rio 2016.

After four big races, the fleet is looking forward to some recuperation time this evening, to warm up and to refuel. “We’ve burned more calories than we can consume,” said Germany’s top Nacra 17 sailor, Paul Kohlhoff. “Today was really challenging, very big waves, but tomorrow looks like it’s going to be much lighter winds.”

In the Nacra 17 it was an up and down day two for World #1 Jason Waterhouse (NSW) and Lisa Darmanin (NSW) who had two high scores (16, 20) plus two top five (4,5) finishes. Unfortunately, their score was later changed to an OCS (premature start) in the last race, which meant a race result change to 44th and thus a drop to 13th overall.

“It was a pretty tricky day. It was still a big sea state out there and some good breeze. We had four races back-to-back with big shifts and big waves so it was a really tough day but we enjoyed it. We had two rough races to begin with but then we got our heads screwed on and got two good ones in the end,” Jason Waterhouse said.

“We’re not feeling too comfortable at the moment, the boat feels a bit slow and we don’t feel we have the right set up. We lost our good spinnaker due to the storm when our gear floated away, but we’ll just take it on. And overall we’re happy with the results in the end after a long day.”

And describing an action-packed Jason added: “There was plenty of action out there, I lost Lisa over board at one bottom mark, which was pretty interesting. Lisa clung for dear life on the foot strap and I managed to drop the spinnaker and get her back on board. Luckily she was alright and it was just at the bottom gate so we only lost ten boats so it wasn’t too bad. Then at the last top mark we were second around when we caught a huge bit of weed and we lost about six boats in twenty seconds. That was a bit frustrating but we managed to crawl back to a fourth. Tomorrow looks lighter and warmer, which we’re all looking forward to.”