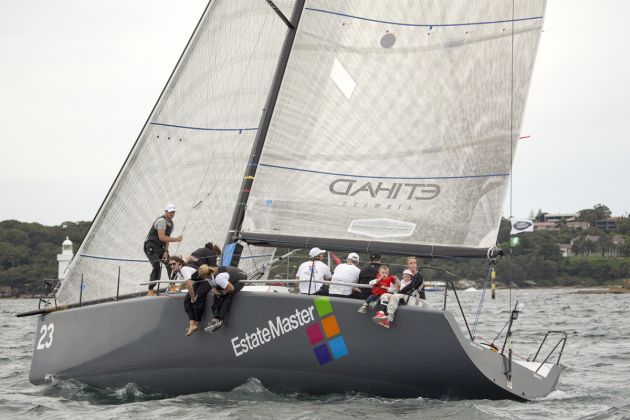 Estate Master made the best of the breeze - credit David Brogan

It was not the easiest of days on the water in the Land Rover Series, hosted by the Cruising Yacht Club of Australia, as a light breeze on a dull day floated in and out, just enough to tease competitors and either make or break their day.

Eighty boats from 108 starters finished the race, conditions, or lack of, getting the better of many, while Holy Cows! owners were heard telling the start boat they were retiring in time to make a champagne dinner commitment.

Among the fleet were many mothers who chose to race on Mother’s Day, while others stayed ashore, enjoying viewing the race over brunch or lunch.

Race 2 of the annual series tested all on Sunday, including those aboard the finish boat, as the light and fickle northerly breeze meant some extremely close finishes, making it difficult to call, with so many finishing in clusters.

One such case was Division B, where it was originally thought the CYCA’s commodore, John Cameron, had won with his More Witchcraft. Unfortunately, Cameron didn’t quite conjure up enough witchcraft, when it was discovered the aptly named ‘Outlaw’,  Alan and Tom Quick’s Beneteau First 40, had won.

“I’ve been out-lawed,” said Cameron laughing on discovering his Dibley 46 had been beaten to the punch. “It was one of those days of breeze, no breeze. You know – your turn, my turn.

“We’re happy to finish second anyway, after retiring last week when the crew dropped the spinnaker in the Harbour. I asked them for two dozen prawns, but they only picked up the raw prawn,” he said tongue in cheek.

Tom Quick, co-owner of Outlaw with his father Alan, was thrilled with their win, even though his dad could not make the race.

“We got them (More Witchcraft) right on the line,” Quick commented.

“We were pretty lucky in the race. We got through the start at the boat-end well and then picked the right way to go. Then we got clear air when the breeze filled in and lucky we didn’t get slowed up too much and got away from the rest,” said Quick who was particularly pleased with the win because a few new crew members were aboard.

“My wife and two daughters were at Watsons Bay celebrating Mother’s Day and waved me off, while with the rest of my crew, we celebrated the day aboard.”

Lisa elected to stay ashore to celebrate Mother’s Day, telling husband Martin after the race, “See, you don’t need me to win!”

The pair regularly competes together at major Farr 40 events, including numerous world championships, but Hill understood his wife’s desire to stay ashore on this special day.

“It was an inconsistent and light northerly. We sailed straight through the fleet at Shark Island, gybed and crossed the finish line first. You can only laugh at those magic moments –and at the difficult sailing conditions,” Hill said.

For yachting veteran Mike Hesse, winning Division J1 with his Ringle 39, Hanni, was a rewarding experience.

“The day required a huge amount of concentration.  The wind was all over the place and a strong tide was running,” he said. “The lead changed a couple of times near the finish, so it was a very close finish. Really exciting racing.

“The tide was so strong I thought some boats would run aground at Clark Island. I thought we might have to start our motor to avoid it at one point,” finished Hesse, whose notable career includes many offshore wins aboard Love & War.

Karen Hawkett and Brett Pearce sailed their Hanse 350, La Niche, to victory in Division K, making it two wins from two starts. Their ‘lucky charm’ Phil Thompson was aboard again.

Division C winner, Rum Jungle (a Swarbrick 40), owned by the ‘Lost Boys’ syndicate, was the lucky winner of the lift stand launch and two free lay days, kindly donated by the Noakes Group.

Racing in the Land Rover Winter Series continues next Sunday from 11.25am.