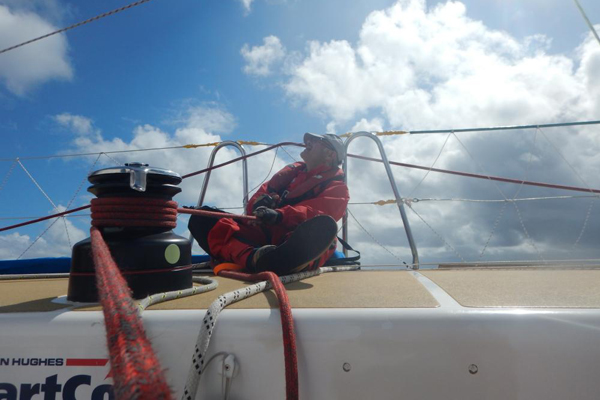 As some teams search for stronger winds, the leading boats are within hours of passing through the Scoring Gate and snatching those vital bonus points. Unicef, ClipperTelemed+, LMAX Exchange and IchorCoal are the closest as of 0900 UTC, with every chance that Derry~Londonderry~Doire, currently in Stealth Mode, is also in the mix.

Working hard to maintain and extend its lead at the top of the Overall Race Standings table, LMAX Exchange Skipper Olivier Cardin acknowledges it is a tight call as to where the points will go as they close in on the gate.

“The intensity of this race is getting higher as we are closer to the Scoring Gate, only 72 miles away. We are among the most southerly boats. IchorCoal is in the middle. Unicef and ClipperTelemed+ on the north side. As we will all converge to the gate, this night could be very busy.”

Praising the efforts of his crew, Olivier adds: “The trimming and helming skills are growing day after day. Evolutions like peeling and gybing are improved all the time. It's a real pleasure to see them 100% focused.”

At 0600 UTC, Garmin also entered Stealth Mode, so its position will be hidden from the Race Viewer and other teams’ Automatic Identification Systems (AIS) for 24 hours. Skipper Ash Skett reports seeing land for the first time since leaving Seattle, as does GREAT Britain Skipper Peter Thornton, whose team was slightly behind Garmin before it donned its cloak of invisibility, and is currently the most northerly team in the fleet.

“When you find yourself at the back of the fleet, you've got to hope for two things – you get more wind than the others. Hold on, that's only one thing. I’m not sure what the other is – it can be up for discussion,” says Skipper Peter, whose team is in fifth place on the Race Viewer, but this does not allow for Derry~Londonderry~Doire and Garmin as their positions are both hidden while in stealth.

“So we are trying to make our own luck over here by searching for that wind to claw back a few miles on those speedy, slightly lighter boats. The watch teams have been continuing to work really well in sailing the boat steadily, conducting evolutions smoothly and not giving up! That's what it's all about…” he continues.

“Oh, and yup, we're starting to see some whales, humpbacks! Along with the odd cruise ship heading up and down Baja California. Oh, and yes, LAND was sighted this afternoon for the first time since starting – the large rocky bit of the poky out section called Mount Eugenia.”

Over 450 nautical miles from land, having made the decision early on to skip the Scoring Gate and head straight for Panama, are Visit Seattle and Da Nang – Viet Nam. Their offshore positions put them at the bottom of the standings, but they are also much further south than their rivals and hoping that the winds work in their favour when they start to move east and closer inshore.

“Last night the breeze went light, the boat was sailed the best it has been sailed since the start of the race. Both watches maintained a full lightweight when I was sure we would need to put the windseeker up. The trimming and the helming was awesome, I was pretty proud of the crew last night, looking at the wind speeds and the boat speed that they maintained was pretty cool,” writes Da Nang – Viet Nam Skipper Wendo Tuck in her daily report.

“The only wildlife spotted today was a lonely flying fish. It’s pretty quiet out here, no other Clipper 70s in sight, no other traffic, we could be way out in the middle of the ocean. It is nice though, being out here by ourselves, not always a good position to be in on a race, but we will have to wait and see how this plays out.”

With winds expected to ease for the teams as they pass through the Scoring Gate and continue down the coast of Baja California, it will become clear whether those offshore made the right call by staying further west in the PSP Logistics Panama Cup. Stay tuned to the Race Viewer to find out what happens next.