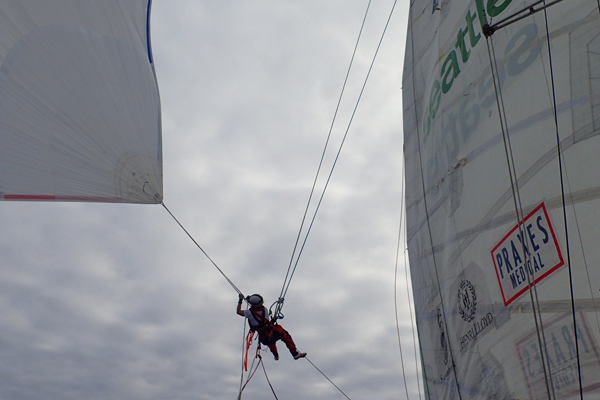 2000 nautical miles and eleven days into the PSP Logistics Panama Cup the frontrunners are rounding the tip of Cabo San Lucas with their eyes now firmly on the Ocean Sprint some 300 nautical miles ahead. On a slightly more southern latitude and further offshore is Qingdao, currently sitting in seventh place, with Visit Seattle and Da Nang – Viet Nam further west again.

Having opted to avoid the Scoring Gate in the hope of making faster progress south, Qingdao Skipper Bob Beggs says the conditions could not be more different from the last race across the Pacific Ocean: “For three days now we have had the lightweight spinnaker flying without change,Qingdao has been upright making typing this blog a pleasure. With flats seas and a flat boat the mothers are able to indulge in cooking better meals than are possible when sailing at forty five degrees. After the battle of the North Pacific still very much fresh in mind it’s a pleasure to have repeatability and plain sailing.”

The most westerly and southerly boat in the fleet, Visit Seattle is in a duel with Da Nang – Viet Nam which went into Stealth Mode at 0000 UTC. In his daily blog Skipper Huw Fernie ponders whether or not his team made the right call in going so far offshore in search of stronger winds.

“Well, the grand plan of sneaking out west, then flying home (south-east) and winning the race isn't going well. This is the period where we need a bit of luck – the wind had to be 100% on forecast, maybe even a little better for us, a little worse for them. But today at least it wasn't to be, the wind has remained in a poor direction and at less speed than we needed, the trouble being that it is showing no signs of shifting so we're now looking at a worse case situation of being stuck out here bobbing around until, well, forever! Of course it could fill any second, so we're constantly on standby for anything,” Skipper Huw reports.

Yesterday, leader Unicef won the race to the Scoring Gate at 1043 UTC withClipperTelemed+ following suit 44 minutes later to collect three and two points respectively. For both teams this achievement holds particular significance because this is the first time either of them has won bonus points in the 2015-16 race edition. But determined to keep Unicef at the front of the fleet, Skipper Martin Clough points out the danger in losing focus for a second, even if it was to celebrate.

“This morning saw Unicef a well-earned first through the Scoring Gate after some hard effort and commitment from the team,” he started. “We celebrated in style by leaving the lazy sheet sail tied to the pulpit whilst gybing. An inside gybe followed which we managed to revert then the second attempt produced an hour glass. Then finally, after much never heard before Cumbrian 'encouraging words' we had the medium weight kite on the right side of the boat with a couple of holes for luck. At daybreak we peeled to the lightweight and medium weight had its TLC sorted.”

Shortly after the first two boats passed through the gateDerry~Londonderry~Doire emerged from Stealth Mode to take the final point after a tight race with LMAX Exchange for the line.

Magnanimous in defeat, Oliver Cardin, Skipper of LMAX Exchange congratulated the other teams on their efforts in a close race for the line.

“First of all, congratulations to Skippers Cloughy (Unicef), Matt (ClipperTelemed+), Dan (Derry~Londonderry~Doire) and their crew for the Scoring Gate. The battle for the gate was a great time. We’ve learnt a lot in this close ocean racing, especially the last 200 nautical miles spent in contact with Derry~Londonderry~Doire, playing cat and mouse. We made their lives more difficult on the last night by fighting more aggressively, but the Northern Irish team closed the gate just before us.”

Skipper Olivier, whose team is currently leading the race overall added: “Next step is a long run downwind until the Ocean Sprint and the first gate of the Panama Canal. The battle continue as Derry~Londonderry~Doire is just by us and we are motivated to catch up the leading boats.”

In the middle of the fleet, Garmin emerged from Stealth Mode in fifth place very close to the Baja California coastline, but with IchorCoal also under the radar until 1800 UTC, there is a chance it could drop back a place.GREAT Britain is currently in sixth and with light winds forecast further south is heading south-west from its inshore position. Mission Performance and PSP Logistics, in eighth and ninth, but are still hopeful of catching the leading boats.

“Here is hoping we get that wind we are searching for soon and can make up some time on them both. It looks like there is going to be a concertina effect in a few days as the wind south of Baja California craps out and leaves us with a very light breeze as the rest of the fleet catches up in the wind off Baja. Like a little parking lot in the Pacific Ocean!”

As the teams decide how they are going to approach the lightening winds, keep up to date with how they are getting on in PSP Logistics Panama Cup by checking the Race Viewer which is updated hourly.