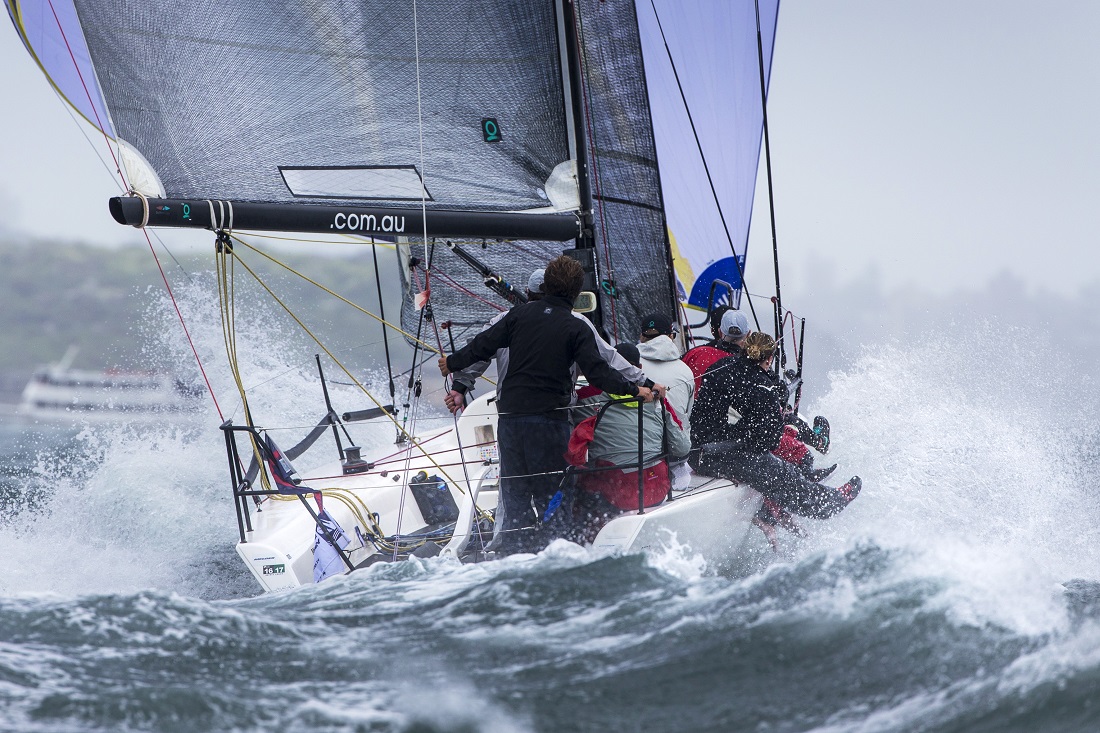 The ‘main event’ got underway at Middle Harbour Yacht Club’s 12th anniversary Sydney Harbour Regatta today, when 21 classes and divisions joined the Sydney 38 class, which started its international championship yesterday – and everyone came ashore with a story to tell when big breeze accompanied a big swell on the Harbour.

Prior to racing, PRO Denis Thompson made the decision to bring those scheduled to sail offshore into the Harbour due to steep seas and winds up to 25 knots on the courses for the one-design boats and the IRC/ORCi racing fleet, citing safety as the reason.

During racing, Thompson conferred with the race officers on the various courses, and eventually most shortened the schedule when winds peaked at 30-32 knots. “We want the sailors and the boats safe, not sorry,” Thompson said.

And while others struggled and broke gear, as witnessed below, none of it fazed Gordon ‘Wingnut’ Ingate, who at 90 years of age steered his Dragon ‘Whimsical’ to a pair of wins.

Ingate, who turns 91 on 29 March (his rival over many years, Syd Fischer, turned 90 today), has lost none of his zeal, zest and panache.

“The wind got up to 30 knots and a bit more. A very different story to the forecast 10 knots. It was very hard sailing, but great fun. Of course, I didn’t do it on my own, I had David Giles (Olympian and former America’s Cup sailor) and his daughter Amy – the same crew who helped me to win the Prince Philip Cup in January.

Mike Gallagher, owner of the Jeanneau 409, Galan, raced in PHS Spinnaker Division 1 concurred: Describing the day on the Harbour course: “We got more wind than we were expecting, which set the scene for a really exciting race from North Harbour to Rose Bay and back,” he said.

“Sensible sailing and good sail control was the order of the day. At least five boats required doctoring from the sailmaker the one race we got in.”

“Aside from good speed, those who lost control must have found the roundups challenging, not to mention managing the unusually large swell.

“It was easy to consider your own sail planning when watching the boats ahead crossing the Heads where the weather caused havoc for a number of participants,” ended Gallagher, MHYC’s Vice Commodore, Racing.

Roundups, broaches, loss of helm control and breakages took their toll on this rainy day. Colourful wet weather gear stood out in stark contrast to the grey day, when the full contingent of 226 boats of varying types and sizes populated Sydney Harbour from Kirribilli down to the Sound, just inside Sydney Heads – where more havoc was wreaked.

Keith Le Compte, crew member aboard Gunther Schmidt-Lindner’s Lyons 46, Austmark, commented: “We split our main, and we saw others just like us. Alacrity (Robert Peters) in PHS Spinnaker division also split theirs.

“We lost a man overboard, retrieved him and retired,” Le Compte said.

“It was pretty lively out there,” added Nicky Bethwaite, also on Austmark. “Lots of round ups, broaches, near-misses, you had to keep a good lookout.”

There was also a report that Alive, Phil Turner’s RP66 from Tasmania, buried her rig off North Head and lay on her side for a good 10 minutes, while Martin Hill laid his Farr 40, Estate Master over and showed some keel and still managed to win both races.

Aboard Peter McDonald’s 5.5M Pam, Jim Nixon told of the exhilaration of boat speed. “I reckon we did 14 knots downwind, the fastest Pam’s ever gone. She’s a heavy dinosaur and just ploughed through the waves.

“In the middle of the Heads, we couldn’t get our kite down it was so wild. It’s the wildest sailing I’ve ever done on The Sound, exciting,” he said.

Aboard the Sydney 36, Onya, Andrew Hurt commented: “We saw 34 knots as we broke the main halyard for a second time. It was very windy.”

What it amounted to was a lucky escape for some and protests and damage for others. It didn’t stop the throng of sailors from kicking back at Middle Harbour Yacht Club when all swapped stories.

And so ended Day 1 of racing for all but the Sydney 38’s, which started their competition yesterday.

Racing concludes tomorrow when new champions will be crowned in five classes and winners of the remaining classes will be celebrating ahead of the official prize giving at Middle Harbour Yacht Club on Monday evening.