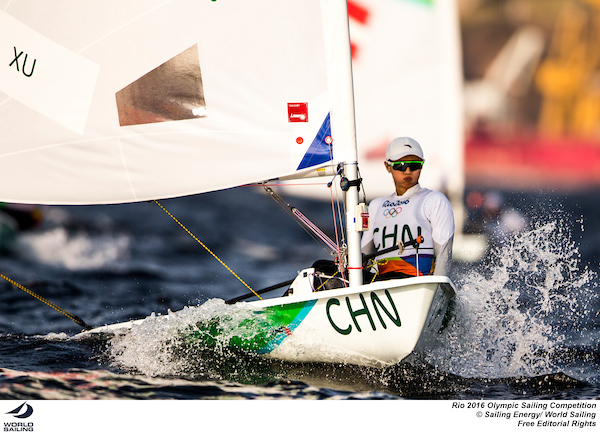 Sailing in the same appalling conditions as the men, the Laser Radial contestants at Rio 2016 started to sort themselves out and a top three is starting to emerge.

After her heartbreak at London 2012 when she missed a medal by the barest of margins, Ireland's Annalise Murphy is sailing a solid series with a scoreline of 1,(13),4,7,5,2. That consistency sees her a point ahead of Anne-Marie Rindom (DEN) with London Silver medallist Marit Bouwmeester (Ned) another point away in third.

Also still in touch is the defending champion Xu Lijia (CHN) on 27 points but her regatta was made harder by a 12th in the second race today, to go with her controversial disqualification for taking too long to do a penalty turn on the opening day.

While the conditions remain so difficult, high scores from the leaders are very possible but it is hard to see the Gold going to anyone currently outside this pack. That excludes London Bronze medallist Evi van Acker who started well with two second places in the first three races. However she struggled in today's rain and tide and finished with a 16th and 15th to be on 47 points after her drop, 26 points out of the top three.

One place behind the Belgian is Australia's Ashley Stoddart who had two 11th placings today. She is certainly a good chance of making the medal race but is unlikely to figure in the medals.

Ashley said that squalls were coming through all day. “It was important to stay right and keep the bow out of the water and I did that,” she said with a smile.