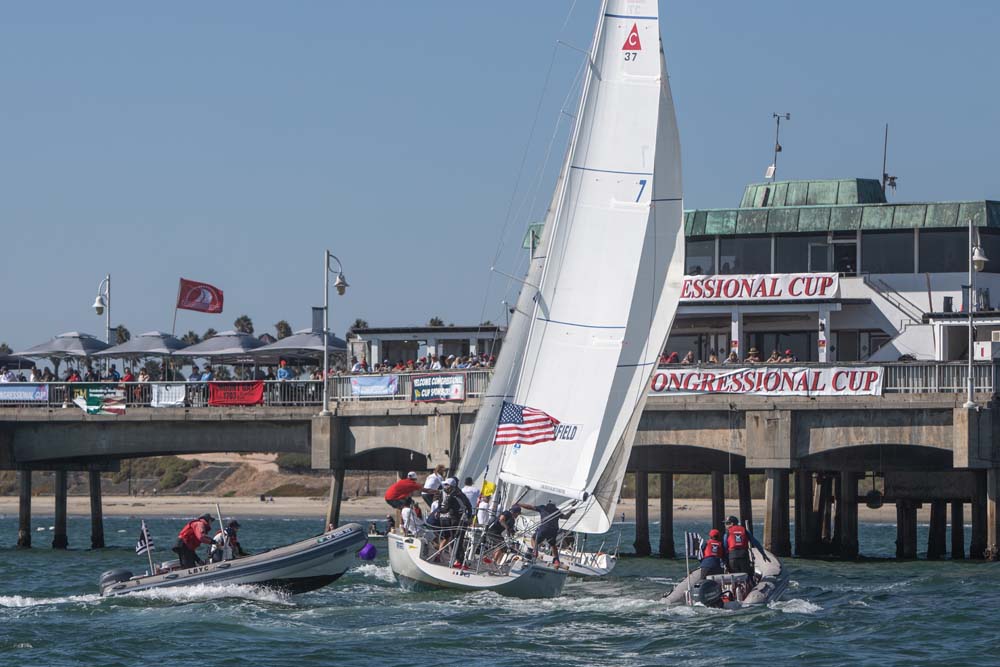 Long Beach Yacht Club is ramping up for Congressional Cup 2022 with an all-star line-up including more than half of the world’s top-ranked match racing skippers.

Kicking off the 2022 World Match Racing Tour, this legendary Grade 1 sailing event will take place from April 18 to 23, 2022 in the waters of Long Beach, California.

Founded in 1965, after more than five decades the Congressional Cup remains a magnet for the world’s finest skippers and crews. 10 teams from five different nations will be vying for the Cup, in five days of heated match racing that begin April 19, after a practice day April 18.

“On this occasion of the 57th Congressional Cup, LBYC and the worldwide sailing community salute and thank the visionaries who created ‘the Grandfather of Modern Match Racing,’” announced 2022 Chair Lisa Meier. “The Congressional Cup is the oldest continuously held match race event in the world. This regatta pioneered the concept of on-the-water umpiring and set the standard for top-level match racing. And the list of past winners reads like a Who’s Who of America’s Cup champions!

“The establishment of the Congressional Cup markedly influenced the long-term nature and focus of LBYC: truly, the exquisite hand-etched silver cup and the prestige it represents has become what founder Bill Dalessi and the LBYC Board envisioned: ‘a most highly sought-after trophy by the yachting fraternity.’”

“We cannot get enough of this event: we are looking forward to another one!” declared Taylor Canfield (USA) who returns with Team Stars+StripesUSA to defend their championship title. Canfield’s five-win record (2014, 2015, 2016, 2018, 2021) makes him the most triumphant skipper in Congressional Cup history.

Eager to knock him off his throne will be Ian Williams (GBR), returning after sitting out last year due to pandemic travel complications. “We are really excited to return after three long years’ absence!” exclaimed Williams, whose stellar record includes four bullets (2011, 2012, 2017, 2019) in 10 years of Congressional Cup racing. “The friendly reception we get from all the club members and staff at the LBYC make the Congressional Cup one of the highlights of our calendar,” he added.

A unique combination of unparalleled hospitality alongside superior competition makes the Congressional Cup one of the most desirable events in the world.

Pearson Potts (USA) steps up after two appearances at the Ficker Cup qualifier. The 29-year-old from New Orleans shares first-timer distinction with LBYC’s own Staff Commodore Dave Hood (USA), 64, who has two decades of racing on the Catalina 37 fleet: yet will vie for the Congressional Cup for the first time. The final two contestants will advance from the Ficker Cup – a challenging Grade 2 match race series in its own right and a WMRT event, to be held April 13 to 16, 2022 at LBYC.

This year’s Congressional Cup will also launch LBYC’s build-up to the 2028 Olympic Games and the important role the club will play. Congressional Cup Stadium, the racecourse situated off Belmont Veterans Memorial Pier at 39th Place and E. Ocean Blvd., will be re-dedicated Tuesday April 19, starting with breakfast at LBYC and a procession to the Pier. After ceremonies attended by local dignitaries, athletes, press and organizers, the action will begin!

Teams will commence the double round robin series Tuesday April 19 starting at noon, battling one-on-one aboard equalized one-design Catalina 37s keelboats. This format fuels excitement, as the players dial in the boats, tune in to conditions, and sharpen their skills. The rousing competition delights both racers and fans, who can watch the combat from the Belmont Pier.

Round robins continue through the week with semi-finals, petite finals and the final matches Friday and Saturday April 22 and 23. Only one skipper and team will reach the pinnacle, to win the Congressional Cup and don the coveted Crimson Blazer: yacht racing’s equivalent to The Masters’ green jacket.

“As one of the founding events of the World Match Racing Tour, the Congressional Cup has always been one of the most sought-after events to win by match racing teams all over the world. We are delighted for the Congressional Cup to be the curtain raiser for the 2022 WMRT and look forward to joining everyone at LBYC again in April,” noted James Pleasance, WMRT Executive Director.

“We, at KNOTS Racing, are super excited to be making our second appearance at the LBYC Congressional Cup,” announced Egnot-Johnson, who finished fifth in the 2019 event. “We can’t wait to stack up against some of the world’s best match racing teams to see where we stand!”

For further information on the 57th Congressional Cup, see: https://thecongressionalcup.com