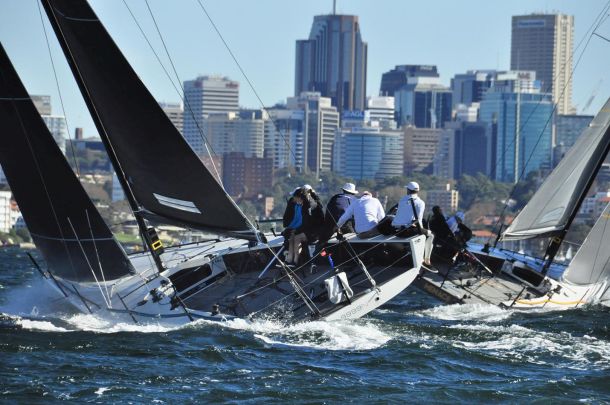 John Bacon’s Dark Star from the Royal Prince Alfred Yacht Club minimised errors and maintained composure in the puffy westerlies on Sydney Harbour to take out the MC38’s Autumn Regatta by a single point.

Autumn and winter breezes typically come in waves out of the west, under the Harbour Bridge and down the hills off Sydney’s pricy foreshore suburbs. Seven MC38 crews were kept busy constantly changing gears in today’s wind range of six to 23 knots, as well as dodging private vessels and the CYCA’s winter series fleet.

Off Garden Island’s Naval base each strong gust acted like a slingshot, releasing the MC38s one by one and producing thrilling downhill speeds of 17 knots.

“The guys were changing gear all the time, you’d go through a soft spot then all of a sudden you had to respond in the puffs,” Bacon said. “We were really quick upwind today; coming into this series we did a few sessions and the stuff we were working on really paid off. It’s nice to do well when it’s breezy; that’s when these boats can be challenging.”

Coming into the final race seven of the series, Dark Star’s tactician Cameron Miles calculated they needed to finish ahead of Chris Hancock’s Vino to keep Ginger off the podium top step. The first pack of four, including Menace, Ginger, Dark Star and Vino, finished within 33 seconds of each other and Dark Star pipped Vino by just nine seconds “It was very close,” Miles grinned with relief. “As a team it was the best regatta we’ve sailed together. We weren’t without errors, but probably less than most.”

“All seven of us have been there since the beginning, we have really good composure,” added Bacon. He’s the Australian class President and in that role thanked Ginger’s owner Leslie Green for allowing his boat to compete while he’s in Europe, and acknowledged the Royal Sydney Yacht Squadron’s PRO Rob Ridley for another good day.

“We sailed OK today, a couple of mistakes cost us points,” recapped Ginger’s young tactician David Chapman. “Dark Star had a very good day; they were clearly the best boat out there. We will go away and work on being smoother downwind. Thanks to Andrew Hunn for stepping on to drive and getting the crew sailing,” he added.

Third was Howard Spencer’s New Zealand MC38 Menace. A seventh in race five after gear failure caused the mainsail to end up on the deck mid-race dented the Kiwi’s chances of repeating their stage one victory. The Autumn Regatta is the second of a current five-part Australian.

Chris Hancock’s Vino might have finished fifth overall behind Marcus Blackmore’s Hooligan but they were the regatta’s big mover today, Sunday May 10, 2015, charging to the front on a couple of occasions and earning the bullet in race six.

“We really struggled yesterday with a lack of practice, communication and getting off the starting line, and having mistimed the starts we were then out of phase,” explained Vino’s tactician Gordon Maguire. “We set about this morning to correct this and today we became the bat instead of the ball. The crew worked hard on the starts and communication, and rather than other people forcing us to go a certain way, we decided where we’d go.”

On the MC38 class in general the Irishman had this to say: “The difference between these boats and other one designs is once you make it to the top mark and feel like you’ve done most of the tactical hard yards then you have to get downwind. With massive differences in boat speeds the next gust can win the race. It’s exciting and adds a whole new dimension for the tactician, which I’m really enjoying.”

On Mother’s Day, Maguire’s message to his dearest back in Dublin was spoken like a true Aussie: “love ya mum”.