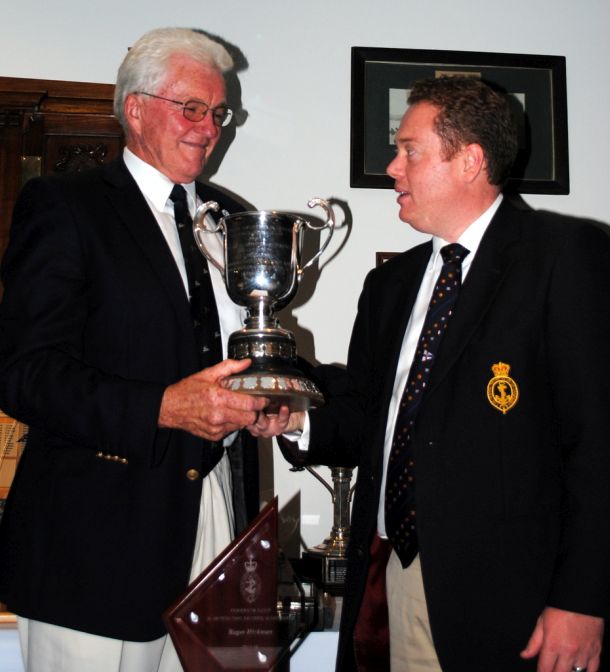 A Tasmanian by birth and a long time member of the RYCT, but now based in Sydney, Hickman flew down to Hobart to accept the trophy from Commodore Richard Batt at the club’s annual prizegiving dinner.

The Governor’s Cup winner, for outstanding yachting achievement over the past season, is chosen by Past Commodore’s of the RYCT with Vice Commodore Matthew Johnston commenting: “This year the list of nominees was long, illustrating a great year of sailing and success by club members. Those nominated are the crew of Voodoo Chile, the crew of Whistler, Michael Cooper and Roger Hickman.”

Presenting the trophy, Vice Commodore Johnston continued: “Roger has won most of the offshore sailing regattas in Australia and is a member of the Yachting Tasmania Hall of Fame. In 2014 Roger and his crew once again climbed the highest pinnacle, winning the Rolex Sydney Hobart Yacht Race 2014 in the Wild Rose.”

The Governor’s Cup caps a stellar 12 months in yacht racing for Hickman. In early December 2014 he was named the Ocean Racer of the Year by the Cruising Yacht Club of Australia after winning his seventh CYCA Blue Water Championship, with Wild Rose taking first place in her IRC and ORCi divisions of the 2013 Rolex Sydney Hobart and a member of the winning team in the revived Southern Cross Cup.

Within three weeks of receiving that award many more accolades were to be showered on Wild Rose, skipper Hickman and her dedicated crew after a splendid victory in the 70th Rolex Sydney Hobart Yacht Race.

It was Hickman’s third overall win in the ocean classic: as co-owner/skipper of Selbourne Wild Oats in 1993 and 22 years later with the same yacht, now known as Wild Rose, and as sailing master on the 2000 race winner Ausmaid in 2000.

‘Hicko’ is Tasmanian born and bred, still a member of the Royal Yacht Club of Tasmania, and proudly calls Hobart ‘home’. He learned to sail on southern Tasmania’s cold, often unpredictable and rugged waters, and his early training on the River Derwent and southern offshore waters has long been reflected in his noted seamanship skills.

Since retiring from the merchant marine as a ship’s master, he has been based in Sydney and is a long-standing member of the Cruising Yacht Club of Australia.

Commodore’s Trophy for most outstanding youthful participant: Jock Calvert who will again represent Australia at the ISAF Youth Worlds in the RS:X sailboard class.

Past Commodore’s Trophy for service to yachting: Michael Vincent for his tireless contribution to the RYCT, including off-the-beach sailing and keelboat racing.

Jock Muir Memorial Trophy for outstanding seamanship: The crew of Mistraal, skippered by Jacinta Cooper, for their actions following the crash of a light aircraft in Storm Bay while photographing yachts in the 70th Rolex Sydney Hobart Race.